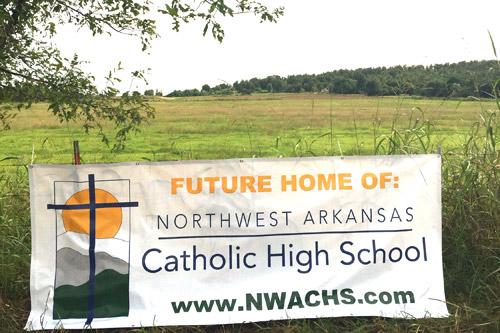 Alesia Schaefer
The proposed land under contract for the future Catholic High School in northwest Arkansas is 45 acres in Springdale near Interstate 49. The planning board is targeting a fall 2017 opening date.

Alesia Schaefer
The proposed land under contract for the future Catholic High School in northwest Arkansas is 45 acres in Springdale near Interstate 49. The planning board is targeting a fall 2017 opening date.

ROGERS — The planning board set up to establish a Catholic high school in northwest Arkansas has hopes of prosperity for the new year as they begin the initial fundraising to make the school a reality.

Since last summer, the board has made significant headway with the plans of beginning a Catholic high school in one of the state’s fastest-growing areas. The project has been on and off the diocesan table for more almost two decades, but momentum this time around has propelled the proposal forward.

The movement toward a high school is due in large part to the tenacity of the two sisters who have been at the helm. Since launching a website and surveying parishioners about the need to establish a Catholic high school in the area in the summer 2014, Ashley Menendez and Adriana Stacey, both parishioners of St. Joseph Parish in Fayetteville, have stayed the course.

The big three goals tackled by the planning board this past fall were finding a location for the school, affiliating the school with a religious order and beginning the search for a school leader.

Currently, 45 acres on the edge of Springdale are under contract. The property’s central location between Interstate 49 and Highway 71B and the larger acreage are attractions of the proposed land. One hurdle was cleared when the land was rezoned by the Springdale Planning Commission in November.

Finding the right parcel of land was difficult, but buying the property is proving to be a challenge as well, said Menendez, who is the board president. Donations have been received, she said, but not enough to pay for the land by the Jan. 31 closing date.

“This project rests on our shoulders,” she said. “In order for it to go forward, we need financial support from our community.”

But Menendez is pragmatic about the project and realizes building a large-scale high school may be down the line.

“One of our priorities will be to begin in an interim facility as many charter schools do and begin establishing the culture and charism of our school,” Menedez said.

Although the diocese has given both its blessing and guidance in the project, it cannot financially support and bring the school under the auspices of the diocesan umbrella. Providing that Catholic charism for the school that would be operating independently was crucial for the planning board.

In August, two representatives from the De La Salle Christian Brothers visited the area and spoke with parishioners, parents and area priests in informal settings about Lasallian education and the possibility of the order representing the future school with their charism. Dr. Scott Kier, superintendent of Lasallian schools, and Brother Michael Fehrenbach, FSC, Lasallian formation coordinator, visited the three Catholic elementary schools and parishes in the area and met with diocesan liaison, Father John Connell, pastor at St. Raphael Church in Springdale. Because Lasallian education centers on Catholic values, personal relationships and academic excellence, parents and those closest to the project felt the Lasallian connection would be a good fit. Presently, a formal agreement of their intention of representing the school has been drafted and is awaiting more specific details and final approval by Bishop Anthony B. Taylor.

Lasallian education is part of one of the largest educational networks in the world and can be found in 113 schools and ministries throughout the United States and Canada. It began in 1680 when St. John Baptist de La Salle formed a community of educators and began developing in them a spirituality of teaching and learning. His ideas of faith formation, respect for the individual, service and social justice resonated with people then and still do today.

For Paul and Susan Antony, who have been parishioners at St. Raphael for 22 years and are parents of four children, this could be a dream realized.

“There have been three attempts at this high school, but for the first time this feels like it is really going to happen,” said Susan Antony, who is the new youth director for the Springdale parish. Both she and her husband, who is brother to Father John Antony of Fort Smith, believe strongly in the benefits of Catholic education.

“We feel it is important that faith be a part of children’s learning,” she said. “To have faith makes them a complete person. If young adults are taught about compassion, faith, service and social justice, we are giving them a better foundation to succeed in life.”

Looking for a candidate to become the president/principal of such a large-scale project has also been of preeminent importance. After posting the position on diocesan and national websites, five candidates from around the nation were interviewed in late October. As the selection process continues, the final candidate should emerge by February.

“I am passionate about this project,” said Meredith Haviland, board member and parent of two children currently enrolled at St. Vincent de Paul School in Rogers. “It is on our shoulders as Catholic parents to lead this important endeavor which will leave the Catholic education legacy to our children and beyond.”

If you would like to be involved in the project, donate toward fundraising efforts or have questions, e-mail at or visit nwachs.com. Donations can be made online at gofundme.com/nwachs.

Reflecting on "memento mori" can free us from worry