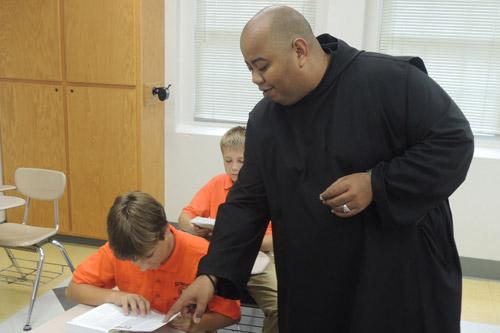 Courtesy Subiaco Academy
Brother Dominic Faciane, OSB, works directly with students at Subiaco Academy. At 39, he is one of the younger black Catholics in consecrated life in Arkansas.

Courtesy Subiaco Academy
Brother Dominic Faciane, OSB, works directly with students at Subiaco Academy. At 39, he is one of the younger black Catholics in consecrated life in Arkansas.

In the United States, the history of African Americans following religious life in the Church has been uphill battle. Before and around the time of the civil rights movement, many religious orders would not accept a black person as a sister or brother. Many chose to form their own religious orders and though vocations for black Catholics began to gain steam, today’s numbers are low. According to 2014 statistics from The Center for Applied Research in the Apostolate (CARA), there are only 400 black religious sisters; 50 religious brothers; and 250 priests in the United States.

However, the Church has steadily been working on ways to provide more outreach to black Catholics.

In 2007, The National Black Catholic Congress approved a national pastoral five-year plan to guide black Catholics in ministry, which was affirmed in 2012. The plan consisted of 10 focal points, addressing holiness of life, schools, marriage and vocations as they relate to black Catholics.

According to the 29-page outline, available at nbccongress.org, in the 2012 ordination class in the United States, there was just one U.S.-born black Catholic becoming a priest.

Part of the plan includes prayer, promoting awareness of the Institute for Black Catholic Studies at Xavier University of New Orleans and calling on vocations directors to provide more outreach to African American youth.

Brother Dominic Faciane from Subiaco Abbey, said even though there were black religious orders around him growing up, he just happened to be “in the right place at the right time” to learn about vocations. Having a black member of a vocations recruitment team would be a good place for the Church to start better outreach, “to show people yes, there are people of color who do respond to the call.”

“How actively do we promote and pursue African Americans to vocations? Letting African Americans know there is a place for them in the Church,” Brother Dominic said. “I truly think there are vocations there, they just need to be nurtured.”

Part of the problem for getting more religious vocations today is overcoming the temptations of a secular lifestyle, said Sister de Porres Polk, from Holy Angels Convent in Jonesboro.

“Too much is being brought out to them in the public, social activity, sexual stuff going on and religious life is not giving them what they want. I’ve talked to some of them about it. They weren’t interested — they wanted to go off to school and get their degree,” Sister de Porres said. However, God’s will prevails.

“If you’re feeling the call for religious life … check it out and give it a chance. If you gauge your life against someone else’s, you’re not going to get anywhere in life.”

In recent years, the committee has provided intercultural conference training that gives religious leaders and lay people tools on how to make a multicultural church more unified.

In Arkansas, the Diocesan Council for Black Catholics has been working on better outreach. Verdell Bunting, president of the Diocesan Council for Black Catholics in Little Rock, said the three predominantly black churches hosted a vocations rally a few years ago, which included seminarians sharing why they entered religious life. Once a year, the council also hosts a youth retreat, primarily for teenagers, usually with a priest, deacon or sister encouraging them to discern a religious life.

Sister Kibeho Straham, who grew up attending Christ the King Church in Little Rock and is currently a novice with the Servants of the Lord and the Virgin Matara, said she walked through the door God opened for her. It’s her hope that other young black women and men find their place in serving Christ.