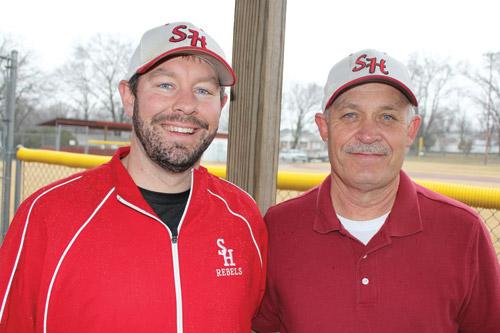 Dwain Hebda
Head Coach Aaron Duvall (left) and Assistant Coach Rick Duvall check out the field before the opening of baseball season. The father-son tandem are entering their sixth year coaching at Sacred Heart in Morrilton.

Dwain Hebda
Head Coach Aaron Duvall (left) and Assistant Coach Rick Duvall check out the field before the opening of baseball season. The father-son tandem are entering their sixth year coaching at Sacred Heart in Morrilton.

There was a time when Rick Duvall wasn’t coaching baseball at Sacred Heart High School in Morrilton, but there are few around the program today who remember it. Fewer still remember a time before he was coaching Little League baseball for the youth at Morrilton.  And just a couple remember very clearly how it all got started, as only one who was there can.

“It’s kind of funny, this is the good part of the story,” said Aaron Duvall, Rick’s son and Sacred Heart athletic director. “I was a junior in high school in 1997, and we didn’t have a baseball team. So, myself and a bunch of my friends rounded up about 15 guys who wanted to play and at the time you had to have a licensed coach or at least a licensed teacher to coach.

“Even though Dad had been coaching me and all of my friends our whole lives, and he said he would love to do it, he had to be certified and he wasn’t certified. So what happened was, we found another teacher here at school, John Taylor, and we asked John if he would kinda sign off and be there and be Dad’s assistant. And that’s how it happened.”

So began Rick’s tenure as the school’s baseball coach, a coaching career that kept extending well past its intended due date. It wasn’t the last time his fondness for the school and his kids’ athletics careers would put him in the driver’s seat supporting the Rebel program.

“I tell ya, both of my sons, and my daughter too, they were good in sports,” he said. “I got tied up at the school in 1998 driving a bus to all the basketball games for all of the kids. I’ve been doing that and I started coaching baseball in 1997. And I’ve been up there ever since.”

Once Aaron, a talented first baseman, graduated and left for the University of Central Arkansas, Rick figured he’d hang with it long enough to coach the next Duvall baseballer.

“Dad said, ‘Well, I’ll stick around and do it until Kyle graduates,’ and that was 2007,” Aaron, 36, recalled as Rick, 60, chuckled along to the story. “So by that time, we thought well, that’s probably gonna be it for Dad. But I guess he just loved it enough that he stuck around for a few more years and he was probably just about ready to hang it up when I got the job here and I wouldn’t let him go.”

While there’s no way to tell if the program would have survived without the Duvalls’ long tenure, it’s a safe bet that it wouldn’t be the program it is today. The Rebels have made it to the state tournament 13 years in a row — eight under Head Coach Rick and five under Head Coach Aaron with Rick by his side as assistant — a streak that is by any measure impressive and given Sacred Heart’s diminutive size, positively dynastic.

The streak isn’t the only don’t-see-that-every-day thing about the Rebel baseball program, it’s also the way the Duvalls go about their business of coaching. There’s no tryouts at Sacred Heart and no cut downs, either. Baseball is played in baseball season and even then, it’s taught with a healthy dose of plainspoken perspective.

In an era when talented young players hire private hitting coaches in order to land on all-star and traveling teams that log more miles and games than some minor league clubs, the Duvalls’ audaciously old-fashioned formula for success almost defies belief.

“There’s a lot of people talking about, ‘Well, you can’t win unless you practice year-round,’ and do all those things and yet we’ve been to the state tourney 13 years in a row and it’s all been the same philosophy,” Aaron said. “Show up, have fun, play to the best of your ability and give it all you’ve got.

“Obviously, having athletes helps, you know, and we’ve been blessed with having some great ballplayers over the years,” he added. “There’s been years where we thought we’re not going to do that well this year, this might be the year where that streak comes to an end. And yet, our kids just want to win.”

The Duvalls, both members of Sacred Heart Church, have accomplished so much with seemingly so little, it’s hard not to wonder if there’s some divine providence sprinkled into the mix. So much so, that when Aaron talks about the Rebels’ plans for a deep run into the state tournament, you don’t doubt him for a second.