25 years of Project Rachel: Healing after an abortion 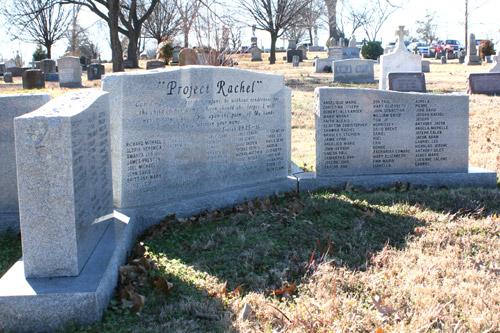 Aprille Hanson
A Project Rachel monument in memory of aborted children stands at Calvary Cemetery in Little Rock. Project Rachel gives women who have had an abortion a chance to heal.

Aprille Hanson
A Project Rachel monument in memory of aborted children stands at Calvary Cemetery in Little Rock. Project Rachel gives women who have had an abortion a chance to heal.

Project Rachel, a confidential support group for women who seek to find healing after an abortion, came to the Diocese of Little Rock in 1989 at the request of the late Bishop Andrew J. McDonald for Anne Dierks to oversee. The program was officially launched in 1991, connecting women who called in need of healing to counselors or priests. In 1995, the support group was formed by Dierks, who is still at the helm of this ministry, supported by the diocese’s Respect Life Office.

The free support group has sessions twice a year, in September and February, for 11 weeks. Dierks said where they meet is confidential, known only by her and the women participants. Dierks maintains a private Project Rachel phone line where people can leave her messages.

“She calls me and she does not have to give me her real name, but I need a real telephone number,” Dierks said. “No one answers that voicemail except me.”

Dierks said she will talk with women over the phone to find out “what their needs are” and will often meet with them somewhere, if they are willing. They are then put on a list if they want to be a part of the support group.

“She does not have to give me her real name ... No one answers that voicemail except me.” Anne Dierks

“Their husband, their pastor, no one will know they’ve been through Project Rachel,” Dierks said. “If they run into me in a public place, I won’t even acknowledge them … I’m very, very careful of their identity. They know I protect them.”

The group has been held in Little Rock, though they have had sessions in other locations in Arkansas. It is open to any faith.

“I’ve had all faiths — Buddhists, Jewish women, Hindu women. About half of my group is not Catholic,” Dierks said. “You’re not here for me to convince you to be Catholic … it’s about spiritual healing.”

“Society tells you it’s OK to have an abortion, that it’s a wonderful quick, easy fix … but then they don’t let you talk about it,” Dierks said. “People shun you because you’ve done that. At a point in time she’s going to realize she’s not done something so wonderful. It’s an embarrassment. … It eats at their life and their every being until they can seek forgiveness and move on. It’s very sad.”

Women who enter the support group have the opportunity to share their story and understand how the abortion changed their life.

“It’s a spiritual journey; it’s to walk through the ways that abortion has affected her life and her family,” Dierks said. “Whether its problems with her marriage, problems with her children, maybe abuse, drug alcohol, she doesn’t realize her abortion is the root of those things. We figure out ways to find healing with the Lord.”

Throughout the years, Dierks said she has seen so many women transformed after going through Project Rachel.

“It’s like a miracle. I watch the Holy Spirit work and I’m just amazed. They’ve been touched by him, to call a strange lady and tell me their most grievous sin. I don’t think I could do that,” she said, adding that she’s in awe of their courage. “When they do call, they’re so glad they’ve finally taken that step. I’ve had ladies that haven’t graced the door of a Catholic church in 25 years because they feel they can’t be forgiven.”

Project Rachel provides a nonjudgmental space for women to heal and “get right with the Lord,” Dierks said.

“In this Year of Mercy the most wonderful thing is to let ladies know they can be forgiven, they will be forgiven, all they have to do is ask,” she said. “And Project Rachel is a way to ask.”