Year for religious life is just the beginning

Official end of the Year of Consecrated Life was marked Feb. 2 around the world 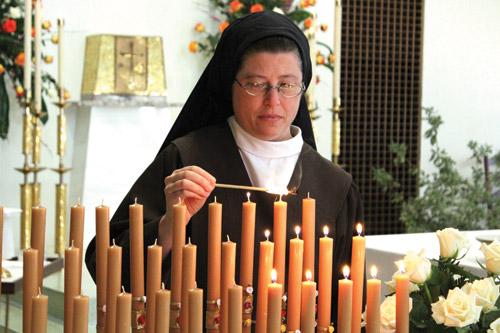 Arkansas Catholic file / Dwain Hebda
Sr. Mercia Mary Bowie, OCD, a Discalced Carmelite of the Carmel of St. Teresa of Jesus, lights candles in preparation for Mass marking the beginning of the Year of Consecrated Life Feb. 14, 2015. Bishop Anthony B. Taylor and Abbot Jerome Kodell, OSB, concelebrated in the chapel of the Carmelite mon-astery in Little Rock.

Arkansas Catholic file / Dwain Hebda
Sr. Mercia Mary Bowie, OCD, a Discalced Carmelite of the Carmel of St. Teresa of Jesus, lights candles in preparation for Mass marking the beginning of the Year of Consecrated Life Feb. 14, 2015. Bishop Anthony B. Taylor and Abbot Jerome Kodell, OSB, concelebrated in the chapel of the Carmelite mon-astery in Little Rock.

When Pope Francis declared Nov. 29, 2014, to Feb. 2, 2016 as the Year of Consecrated Life, he was doing more than bringing awareness to vocations — it was the start of a stronger Catholic movement in parishes throughout the world to truly understand the meaning of religious life.

“A great emphasis of the Year of Consecrated Life was to get the parishes involved in various activities and realize they have to call forth,” said Sister Joan Pytlik, DC, minister for religious at the Diocese of Little Rock. “God is calling; they need to assist their members to consider discernment, a religious vocation.”

In February 2015, about 75 men and women following a religious vocation celebrated Mass with Bishop Anthony B. Taylor at the Carmelite Monastery in Little Rock in celebration of the holy year and to observe the fifth centenary of St. Teresa of Avila’s birth. It was one of many events throughout the year that showed the importance of consecrated life.

“It was very edifying to know that the Holy Father wanted to draw attention to all the religious and all they’ve been doing,” said Sister Mary Clare Bezner, OSB, vocations director at Holy Angels Convent in Jonesboro. “It wasn’t just a few random people that cared; it was a large percentage of people that were concerned and wanted our communities to do well and to thrive.”

The Presbyteral Council approved Sister Joan’s idea to start a Consecrated Life Commission, which was comprised of diocesan office members, including faith formation, youth and campus ministries, vocations, Hispanic ministries and Arkansas Catholic. Religious orders, Knights of Columbus, Catholic Daughters of the Americas and the Serra Club were also represented. The commission implemented goals proposed by a steering committee made up of religious and diocesan leaders.

Throughout 2015, Catholic schools provided lessons on religious; pastors talked more about religious vocations from the pulpit and through church activities; and religious convents/homes throughout the state held retreat days, pilgrimages and events for people to learn more about their communities.

“There’s a great lack of knowledge in the world in general and in even the Catholic community about why we even have religious life,” Sister Mary Clare said. “It’s not something you chose to do because you didn’t want to get married. It’s different than just being a single person and there’s a depth to it that people don’t understand.”

In the River Valley, a vocations day was held for fifth graders at Subiaco Abbey, something that’s been done for years, said Vernell Bowen, Catholic schools superintendent. Central Arkansas will host its first vocations day for fifth grade students at Our Lady of Good Counsel Church in Little Rock May 12.

“We’re just going to continue that on, not just for the Year of Consecrated Life. We’ll try to build up vocations and try to incorporate more about consecrated life into the curriculum. It’s just a good age for them to begin to think about that,” she said of fifth-grade students. “They’re in a Catholic school, and we have to bring forth that information to them about opportunities for religious life. Since we don’t have a lot of religious in our schools, we have to make sure we emphasis that to our students.”

Heard across the pews

Sister Joan said for National Vocation Awareness week Nov. 1-7, packets were sent to the parishes encouraging members to participate in vocation-related activities. It included resources for homilies on religious life, prayers, holy cards and ideas for the classrooms.

“After that I sent out a form for them to report back on each of these areas in what they did,” she said, adding that she received 40 responses. “Most of those had a homily on it, of course everyone does intercessory prayer and a lot of them did something in PRE or religious education classrooms.”

Several churches, including Mary Mother of God Church in Harrison, went above and beyond to implement various vocation-related activities, including having a person following religious life give a presentation. Father James Fanrak, pastor at Mary Mother of God, said parishioners made trips to Subiaco Abbey and Holy Angels Convent to learn more about religious life and had Brother Derran Combs, OFM, a lecturer in music and theology at Quincy University in Illinois, speak at the weekend Masses around Thanksgiving. A holy hour on the first Fridays of the month was also dedicated to praying for consecrated life.

“It’s just to make them more aware not only of vocations to the priesthood at the diocesan level, but also to consecrated life for men and women,” Father Fanrak said.

For about two years, the parish has also given families the opportunity to sign up for the “vocations cross” each week. A family is given the cross during a weekend Mass and takes it home to pray for vocations to the priesthood and religious life throughout the week.

“We actually started it before the Year of Consecrated Life, but then it really became very visible during the year for religious,” Father Fanrak said.

Sister Joan said consecrated life was also discussed during clergy continuing education days “so the priests would be aware and learn the skills to help someone discern.”

Sister Mary Clare said the year gave her an opportunity to be front and center with parishioners to show how religious live out Christ’s example of poverty, chastity and obedience.

“The life that religious live is extremely valuable to the body of Christ,” she said. “I hope they see that and know that we are fulfilling that image that needs to be present on earth to all people.”

Whether or not the Year of Consecrated Life had an impact on vocations directly could be hard to track, though Sister Joan said this year’s Women’s Religious Vocations Retreat held Jan. 8-9 saw a record number of women — 33 — attending.

“I think discernment in this era takes years,” Sister Joan said. “I always tell young women probably 95 percent of sisters that I know, including myself, didn’t want this call. It comes to you and you try to run from it, but God catches up with you.”

While the Year of Consecrated Life started the conversation, its end should not stop the dialogue.

“I would like parishes to keep the idea in front of people, especially young people regarding vocations and for parishes to realize they are the ones to call people forth,” Sister Joan said. “I hope, eventually, every parish will have either a vocation committee or a person designated to do that in the parish. This was just an introduction. It’s up to the parishes to carry the ball.”