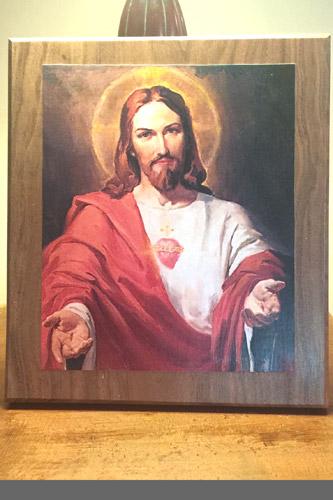 Subiaco monks mounted the first Sacred Heart plaque for the Serra Club. It will be used in prayers for vocations.

Subiaco monks mounted the first Sacred Heart plaque for the Serra Club. It will be used in prayers for vocations.

Looking back on the holy year

To help keep the conversation about religious life alive in the parishes as the Year of Consecrated Life ends, the Serra Club of Greater Little Rock has created a Sacred Heart of Jesus program in partnership with the Knights of Columbus, the Diocese of Little Rock Vocations Office and the Minister for Religious Office.

Betty Jo King, chairwoman of the program, said each parish in the state will have the option of obtaining a 9-by-10 wooden plaque with the image of the Sacred Heart on it.

“The idea is that the priests, during one of the Masses, would present the image of the Sacred Heart to an individual or family so they can take it home and put it in a place of honor,” said King, a member of Christ the King Church in Little Rock. The plaque would come with five Scripture meditations, which include prayers regarding vocations that those who take home the plaque can use throughout the five days they have it.

The first plaque was mounted on wood by the monks at Subiaco Abbey.

“We want this to include all vocations and even I’d say expanding beyond priests and religious, to strengthen the vocation of marriage or embracing the single life, to touch the hearts of all.” Betty Jo King, chairwoman of the Sacred Heart program

“We wanted this to be something you’d feel good about the little ones carrying home” and not breaking, King said. “We want this to be for everyone in the family.”

Some parishes have similar programs with other religious items, including a chalice, but the image of the Sacred Heart was chosen as a way to include religious brothers and sisters in addition to priests.

“We want this to include all vocations and even I’d say expanding beyond priests and religious, to strengthen the vocation of marriage or embracing the single life, to touch the hearts of all,” she said.

The image was chosen after prayerful consideration by Msgr. Scott Friend, the diocese’s director of vocations.

Plaques will be made as churches sign on to implement this program. Though the plaque serves as a reminder about vocations, King said the key component of the program is that each church that wishes to obtain a plaque must create a vocations committee to oversee the program.

“The core of this is the vocations committees. We want these things to be solid, we’ve developed documentation of what they need to do to form a committee,” along with suggested parish activities surrounding vocations, King said. “We want this to be an ongoing thing in every parish … It’s a great thing we had this Year of Consecrated Life but now that it’s ending we don’t want to say, ‘OK, we did what we could, on to the Year of Mercy.”

King said the club will soon be approaching parishes about the program and how they can implement it.

“It’s going to help maintain the momentum,” of the holy year, she said. “It’s important.”

Looking back on the holy year