Horse blessing at Oaklawn tradition for one trainer 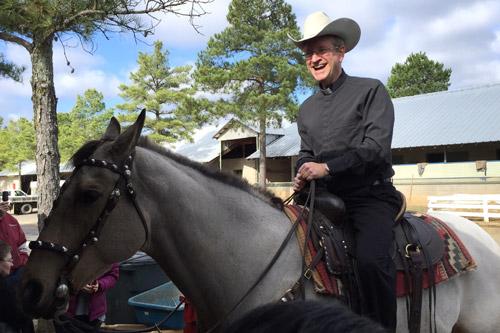 The pastor blessed Discreetness in late December, along with all of the other horses in the stable of trainer William “Jinks” Fires.  Discreetness has since won Oaklawn’s first major race for 3-year-olds, the Smarty Jones Stakes Jan. 18 and is one of the favorites for the track’s prep series for the Kentucky Derby Feb. 15.

Fires and his wife, Penny, are close friends with Mercy Sisters Noeline Banks and Cheryl Quave, who taught their now-adult son, Doug, when he was a student at St. John School. It’s developed into a tradition for the current pastor from the church located a few miles from Oaklawn to bless the horses trained by Fires.

“We’ve been doing this a long time,” Fires said.

Father West said the December blessing was the third time he has gone to the Fires barn at Oaklawn. Sisters Noeline and Cheryl also attended, as did parish receptionist Shelly Dvorak, parish staff members, parish sacristan and two altar servers.

“We used the prayer blessing that is traditionally used on the feast of St. Francis of Assisi,” Father West said. “So it was a blessing through his intercession; the blessing of the animals.”

Father West said each horse was sprinkled with holy water, and following their blessing, each was given a peppermint. Afterward, Father West rode a stable pony through the barn.

“Father got on the pony and then they led him down the shed row to see all the horses he had blessed,” Sister Noeline said. “As he passed each one, they bowed their heads.”

“And I waved back to each one,” quipped Father West.

Sister Noeline attended the Smarty Jones Stakes and made her way to the winner’s circle after Discreetness won. To some at the track, it had become known the horse received a blessing from Father West.

“Someone said, ‘Why did you bless the horse to win? Is that a priority?’” recalled Sister Noeline. “And we said, ‘We really went to bless it to keep it safe as one of God’s creatures.’”

Sister Noeline said the blessing extended to the safety of jockeys and Fires’ employees.

“We need all the help we can get,” Fires said of wanting special prayers for the stable. “My help, they all appreciate it, and ask, ‘When are you going to have a priest come out?’”

Father West said horses have a place in the plan of God, and the topic was visited in the blessing used in December.

“The ritual of prayers themselves speak about how God has blessed the world through the animals,” he said. “He’s given them to us for our service, but then obviously we want to treat them in the proper way.”

Sister Cheryl said Doug Fires attended St. John from kindergarten through sixth grade. Jinks Fires said his wife and son are Catholic, while he was raised Baptist. But the trainer’s appreciation for the Catholic community has been shown in a number of ways. Jinks Fires, along with Penny, often host Sisters Cheryl and Noeline for dinner, and once the couple took both sisters to the Kentucky Derby.

“We’ve been friends for a lot of years,” Fires said.

Fires even named horses for Sisters Noeline and Cheryl, as well as St. John.

“We had a horse named St. John’s Kid,” Fires said. “He was named for the school.”

Discreetness will attempt to get Fires to the May 7 Kentucky Derby for the second time. Another horse blessed by former pastor Father Michael Bass made it to the Run for the Roses in 2011. The horse was Archarcharch, who won the Southwest Stakes and Arkansas Derby while at Oaklawn.

Discreetness now carries the hopes of the Fires stable — and the prayers of his special friends from St. John.