Walking in our own shoes to bring Jesus' death to life 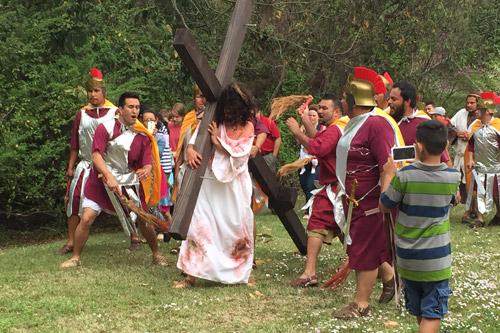 On Good Friday last year, Mariel Henderson-Santamaria not only saw the Passion of Christ play out in front of her eyes — she walked the path. A member of Our Lady of Fatima Church in Benton, she played the role of Veronica during the church’s first live Stations of the Cross — a Lenten tradition for many Arkansas parishes.

“The Stations of the Cross without the live stations I feel are very mechanic. You pray, you kneel, you get up … it’s a repetition of words,” Henderson-Santamaria said. “But when you have the visual part of it, you internalize it more. It is easier to connect with what really happened. As you walk through it with someone who is doing the role of Jesus you feel that special connection.”

Stations of the Cross has been in the Church since 1342 as a devotional developed mainly by the Franciscans, according to the New Catholic Encyclopedia. The devotion, also known as the Way of the Cross or Via Crucis, includes 14 stations gleaned from tradition and Scripture since the Church officially approved the Lenten practice in the 17th century, according to a 2004 Arkansas Catholic article.

Live Stations of the Cross in ways hearkens back to even the earliest days of Christianity where pilgrims walked the path Jesus took to his crucifixion at Calvary.

“Celebrating the Stations of the Cross is connecting, reliving the passion of the Lord and it will take us on the spiritual side to a very deep meaning,” Luna said. “Some parts of the countries in Latin America, the more real they can elaborate it, the more meaningful.”

In more rural tribal areas, he said some take it too far. In some small villages in the Philippines, media reports have shown natives being nailed to crosses, a practice that has been condemned by Church leaders. One of the men claimed in an article posted in 2013 on Huffingtonpost.com that it was his 27th time being crucified.

In Arkansas, the reverence and spirituality behind the depictions in live Stations of the Cross are a popular devotion during Lent. At St. Edward Church in Little Rock, adult parishioners have taken part in live stations for about 15 years. The production is held in nearby MacArthur Park, with veneration of the cross and Benediction following the live stations, said secretary Teresa Mendez. Last year, about 150 to 200 people attended.

Martin Sanchez has helped organize the production for the past two years.

“When we’re in practice or in meetings planning all the work, it’s most important … to help others, to remind them what Jesus Christ did for us. We focus on that point,” Sanchez said.

Though the production is predominantly by Hispanic parishioners, Anglo members have gotten involved, allowing the cultures to “learn a little bit more from other people,” he said.

While those who view the live stations are often moved, Sanchez said it’s helped his faith working behind the scenes.

“It makes me to feel closer with God,” he said.

For the first time last year on Good Friday, the Hispanic community at Our Lady of Fatima in Benton performed live Stations of the Cross on the church grounds, going inside the parish for the final station.

“It was a very good response. Even non-Catholics came last year. We’re expecting more this year, the word has gone around,” said Father Chinnaiah Irudayaraj Yeddanapalli, pastor at Our Lady of Fatima.

About 30 Hispanic members of the church, mostly adults, acted out the scenes in Spanish while the reflections were read in English. Henderson-Santamaria said she felt a spiritual change in her heart from playing Veronica and was moved to be “more reverent” on Good Friday by taking off work that day from now on to witness or take part in the Stations of the Cross. During the final station, Mary was holding Jesus’ crucified body in front of the altar at Our Lady of Fatima.

“She was in actual pain from holding the body on her knees,” Henderson-Santamaria said. “People were actually crying because it was so realistic.”

Growing up in Panama, Henderson-Santamaria said the Stations of the Cross can be a two- to three-mile procession, with people carrying statues representing each station.

Father Yeddanapalli said in his native India, Good Friday is a national holiday and live Stations of the Cross are performed in the streets.

“Inside the church you see the pictures and say the reflections,” but live, he said, “you’re involved emotionally, with all the traumatic expressions. Carrying the cross like Jesus did, people seem to be emotionally moved by it. It’s what happened 2,000 years ago. It brings them a change in their heart.”

While adults can find spiritual fulfillment acting out the Passion of Christ, so do young people in parishes.

Krystina Tacchi, director of Life Teen at St. Stephen Church in Bentonville, said her high school students use a unique live Stations of the Cross guide that focuses on “Jesus’ voice speaking and our voice speaking back to him.”

On the second station, where Jesus takes his cross, the guide says, “Christ says, ‘This chunk of tree is what my father chose for me,’” and continues on, she said, with the response in part, “‘Lord I take my daily cross, I welcome the monotony that often marks my day.’”

“The students really connect with the idea of the relationship or being able to speak with Jesus,” Tacchi said. “When they’re just listening and going around the church station to station, it’s very easy to let your mind wander.”

Chase Richard, 17, has played a Roman guard during live stations for two years at St. Stephen.

“It kind of gives me a better perspective into how it was,” Richard said. “I have something to picture instead of just reading it.”

Rather than acting out the scenes, Immaculate Heart of Mary’s sixth through 12th grade Catholic Youth Ministry members provide still reenactments at each station.

“It was a really moving experience watching it last year. The lighting in the church is kind of dim; it was really beautiful,” said Christy Grimes, a parent volunteer who is organizing this year’s live stations.

While the Stations of the Cross are moving on their own, seeing it in motion can be a spiritual experience, Grimes said.

“I remember the one part where it was dark and it opened up with the scene where Jesus already died. I’m going to cry thinking about it,” Grimes said. “He was laid out and they were lifting him up. It was especially moving.”