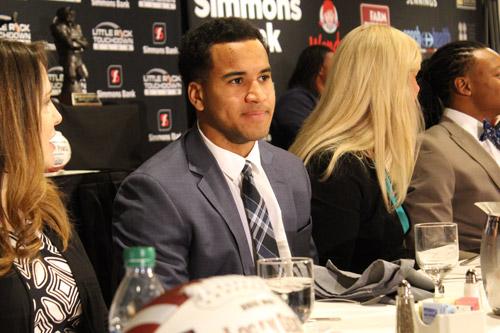 The more things change for Fredi Knighten, who completed his last campaign at quarterback for the Arkansas State Red Wolves this season, the more they seem to stay the same.

“One thing you notice about Knighten … is how physically unimposing he is — at least when he’s standing still,” is how Arkansas Catholic described the then-Pulaski Academy junior in a 2010 profile. “When he’s on the fly, it’s a different matter.”

At 5’11” and a sleek 197 pounds, Knighten still doesn’t tower over a room and with a low-key demeanor, he doesn’t dominate a conversation, either. And frankly, after years of hearing he was too small, too nice or too fill-in-the-blank to make it on the football field, that’s how he likes it.

“(Football’s) just playing a game, you know, everybody’s, ‘Oh, it’s a big deal.’ It’s a game,” he said. “I’ve been playing the same game since I was 6 years old in my backyard and now people are saying I might have an opportunity to get paid to do it, you know, that’s just crazy, that’s wild. And I’m extremely blessed.

“I’m just a normal guy. I’m just like everybody else. There’s nothing really special about me. I just try to be a good person, you know, that’s the stuff people remember.”

All anyone needed to remember about Knighten’s philosophy on football and life was on display at the Little Rock Touchdown Club’s annual awards banquet Feb. 11. There, he split his time sitting up front and sharing hugs and snapshots with his family in the audience.

The head table seat he earned by way of being named ASU’s Most Valuable Player by the Touchdown Club. With just two full years as the starter in Jonesboro, Knighten ended his collegiate career with nearly 5,400 passing yards, 46 touchdowns and 18 interceptions. He also rushed for more than 1,600 yards in four years, scoring another 21 touchdowns.

His bond with family, however, runs deeper than any stat line and as he moves from the collegiate stage to compete for a roster spot at the pro level, his family is an even more important mooring point.

“Just knowing that they’re there to support me through everything, ups, downs, all the in-between, truly means a lot,” he said. “A lot of people don’t have that. And other people who are outside of my immediate family, my friends, they are my family. Those are people I can lean on anytime. I know I can go to them and talk and I know they won’t judge me.”

Knighten’s bond with his inner circle helped him through the roughest patches of his collegiate career. As a freshman, he felt underutilized and underappreciated and as the program experienced a head coaching carousel of Gus Malzahn, who recruited him, and Bryan Harsin skipping town after just one season each, his collegiate career seemed increasingly snakebit.

“I’m a freshman and I wasn’t playing as much as I wanted to. You know, you come in and you think you’re going to play every down, every snap and be an important factor and that’s just not the way it is,” he said. “I remember talking to my dad and saying ‘I don’t want to do this anymore. Coach Malzhan left, why am I still here?’

And my dad told me, ‘We’re not quitters, man. It might get hard, but that’s when your best attributes come out.’ He’s really one of those reasons why I stayed.”

Turns out father knew best, as in his sophomore year, Knighten was called off the bench in the 2014 Go Daddy Bowl and led the team to a 23-20 win over Ball State. His 212 total yards and three-play, 55-yard winning drive in which he threw a 13-yard score with just 32 seconds left landed him MVP honors.

The win propelled him to the starting job and his best season under center when as a junior he racked up nearly 3,300 passing yards with 24 touchdowns against just seven picks, plus 779 yards on the ground and 11 more scores. He also scored his one and only collegiate receiving touchdown that year. Though his senior year was hampered by injuries early, his return sparked the team to seven straight wins to end the season and win the Sun Belt conference title.

“It taught me to persevere and not just sit back and just let things go idly by,” he said. “And it also tells me to keep having faith; don’t ever give up just because something isn’t working for you right then.”

Now, as he trains for pro day and the chance to play at the professional level, the pride of St. Bartholomew Church in Little Rock is reflective on where his journey is taking him.

“I could’ve been anywhere doing anything in the world, but God put me around these people and this situation, and I like to think that’s for something,” he said. “I don’t necessarily know what; I just try to use my abilities the best that I can and glorify his name and do the things that he wants me to do.”