Helping Hand can now deliver food to those in need 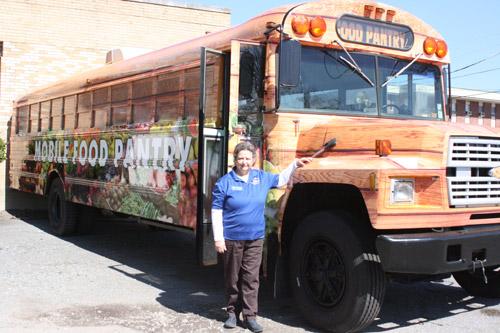 In February, Helping Hand, a nonprofit that supplies food, thrift shop items, including clothing, and limited financial assistance to more than 1,000 needy families in Pulaski County each month, received its first mobile food pantry, thanks to its partnership with Arkansas Children’s Hospital in Little Rock.

“When people call and want to know if we deliver, the disabled or elderly, I just feel terrible we can’t go,” Priddy said. “When Children’s Hospital approached us and asked if we’d be interested in that bus, I jumped at the opportunity. This is a way to go out to those that can’t come here but have so many needs, so we’re just blessed.”

The First Assembly of God Church in North Little Rock offered to donate the 2006 school bus that was once used for transporting members to and from the church to Arkansas Children’s Hospital.

Since the hospital did not have a direct use for it, they suggested Helping Hand, which partners with the hospital to provide groceries to in-need families once they’re discharged. Priddy said they provide about 40 sacks of groceries a month to the hospital.

“This will allow us to pick that number up from the ones doing it currently,” said Scott Allen, director of community outreach for Arkansas Children’s Hospital.

The hospital has formally partnered with Helping Hand for about two years. In 2014, the hospital did a formal study of the families that come into the emergency room and found that 28 percent considered themselves to have food insecurity, Allen said.

“Most of them haven’t been able to work because they have to stay with the patient, the child. A lot of them lose money that way,” Priddy said. “With chronic illness, they’re in and out of the hospital and sometimes they lose their job.”

Before the mobile food pantry bus, the hospital would have to send someone to Helping Hand to pick up the groceries.

“When Children’s said they couldn’t use the bus, I said, ‘Oh yes, but I can’t afford to get it prepared as a food pantry bus,’” Priddy said. “They said no, the (members) at First Assembly North Little Rock,” would supply the money to retrofit it, which cost $25,000 and was done by a church member.

Hardly a big yellow school bus anymore, it is wrapped with vibrant images of produce and inside “it’s like a country store,” Priddy said, with new flooring, bushel baskets and a refrigerator. It also includes a generator to provide heat and air year-round. The bus is expected to start delivering to the hospital this month, and volunteers are needed to load it and unload, if there’s any food leftover at the end of the day, Priddy said.

Buster Lackey, a member of First Assembly, did all the retrofitting along with his father-in-law. Lackey, 45, said it’s important to reach those outside the church, which is something he learned first while attending St. Mary School, now called North Little Rock Catholic Academy.

“As a Christian, we’re commanded to take care of the less fortunate. If one is hungry, we should be the ones feeding them, not the federal government,” Lackey said. “I think it’s important for us to realize this is what the church can do if the church just wants to do it. We came together and raised the money,” under the vision and direction of Senior Pastor Rod Loy.

Priddy has served as the executive director for two and a half years and has already met certain goals through the generosity of others, including being able to provide fresh produce for the past two years. A garden was planted thanks to several organizations in October at 12th and Schiller streets on the ACH grounds to help provide produce to Helping Hand.

“We’ll be able to add to the mobile food pantry, some fresher and healthier options as well,” Allen said.

During Catholic Schools Week in February, Catholic High School in Little Rock collected more than 50,000 food items, the most ever donated at once to Helping Hand, which Priddy said will certainly help stock the bus.

“I’m hoping it’s going to increase the numbers we can reach. Especially those that have a hard time getting to us. Toward the end of last year we had a young mother come here on the bus from North Little Rock,” to pick up diapers for her baby she had with her, Priddy said. “I asked, ‘Do you need food,’ she said, ‘Yes but I can’t carry food and the baby on the bus.’”

In that case, Priddy found a rolling luggage bag in the thrift shop and packed it with food.

“She just thanked us so much. We just take things for granted,” Priddy said. “The clients we see, the majority are really in a tight place.”

Though interviews with those in need are typically done at Helping Hand — ACH handles the interview procedure at the hospital — a group from the University of Arkansas at Little Rock is working to computerize client information, allowing the nonprofit to log the data rather than keep track of it manually. This will also allow interviews to be done while traveling with the mobile food pantry.

“It’s exciting and it’s just phenomenal we have these opportunities,” Priddy said. “I tell volunteers when they first come, this is the Lord’s work. … We’re thankful he chose us to do it.”

Why I am becoming Catholic: faithful share their stories

Christ in the midst of COVID-19