Canopy group will make sure refugees are covered 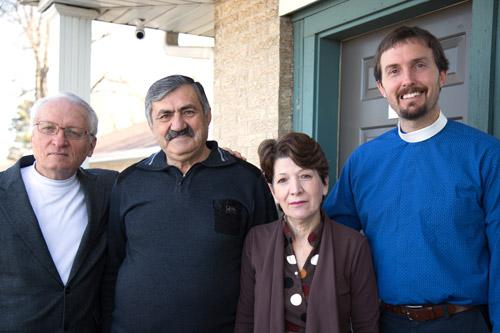 Just as the Holy Family fled to Bethlehem to find a place for the birth of Jesus, so too are the roughly 15.1 million refugees, according to the United Nations Refugee Agency, fleeing to find a safe place to live and thrive in a welcoming community.

But with no family ties to the United States and Arkansas, the Catholic Charities Refugee Resettlement Office in Springdale is not allowed to resettle a family in the area. It is a hole that an ecumenical group is trying to fill with the creation of Canopy NWA, a nonprofit aimed at providing long-term resettlement to a refugee or refugee family.

“With Canopy’s help we’d be able to start taking families that had no family of their own here to support them,” said Frank Head, director of the resettlement office, who is one of the top advisors to Canopy NWA. “We’d substitute a church or parish and have them as a support network in addition to what they’d get from us.”

Schnekloth reached out to Head to discuss a long-term solution for refugee resettlement. A meeting was held to find out how much support there was from the community and churches.

“Over half that showed up are 20-something. There’s a passion for this kind of ministry among younger Christians,” Schnekloth said.

Since that initial meeting, Canopy NWA has become an official nonprofit and will go on to support refugees coming to Arkansas through Catholic Charities and also Lutheran Immigration and Refugee Services once that organization sees that Canopy is able to function successfully, Schnekloth said.

Informational packets will soon be distributed to area churches and entities explaining what they can do to help a refugee. Long-term resettlement aid can include a place to live, furnished upon their arrival, groceries ready for them to use and arranging transportation. Head said while some help will be financial, other sponsorship opportunities are more hands-on and practical, from a church learning more about a refugee’s culture and teaching the family or individual about cultural norms in Arkansas to showing a refugee how to manage everyday tasks in a new place.

“If your interest is you have some housing, great that couple will fit into the plan. Or it could be you’re a job trainer … or a certain skill, you could teach people to farm. Everyone can fit into the matrix and you don’t have to feel you’re adopting a person or family.”

Canopy NWA’s guide suggests churches form a team of about five or six people to coordinate who wants to help and what they can do.

“It’s more like one parish that supports one refugee family,” Head said. “It’s a much greater responsibility than one family can handle.”

The group’s acting advisory board is Schnekloth, Head and Good Shepherd church member Donna Davis, who is a research and evaluation specialist with Cisneros Center for New Americans in Springdale. Head said there are people working on writing grants, searching out volunteer work and are still gathering donations at purechar ity.com/canopynwalaunch. The long-term plan is to have paid staff at Canopy NWA, Head said.

Schnekloth said some young adult volunteers are interviewing immigrant or refugee families who have been in Arkansas to ask, “What helped them when they arrived, what their experiences have been ... what it was like to transition to a new home.”

The goal is to learn how Canopy can make northwest Arkansas a more hospitable home.

“My take on northwest Arkansas is it’s a really healthy location for refugee resettlement,” Schnekloth said. “There’s a lot of economic opportunity and an increasingly diverse community.”

In 2015, the Catholic Charities office placed 12 refugees from Myanmar (formerly Burma) in Arkansas. While the acceptance of refugees, particularly Syrian, is debated at the federal level, the United Nations Refugee Agency has referred 23,092 Syrian refugees to the U.S. and so far, only 2,034 have been allowed to resettle since 2011.

Schnekloth said those fearful of allowing refugees into Arkansas need to study the facts.

“One of the things they learn if they look at that it’s a very arduous, long process to apply through the United Nations. By the time someone is coming here they’ve been through multiple interviews, checkpoints,” Schnekloth said, adding that it’s not logical for terrorists to sneak in through the refugee status process. “No one is going to try to get in through the refugee process because it’s too long. What kind of plan is that? Live in a refugee camp for 17 years?”

Both Head and Schnekloth have spent years working with refugees. Since 2000, Head has been with Catholic Charities and has seen the hardships the refugees are bound by when they arrive. When a refugee comes to the United States, they get a one-time payment of $1,125 and they have to pay the government back within a year for any travel expenses getting to the country, Head said. They receive benefits for about eight months, which vary by state. In Arkansas, it’s just $80 per month to pay for everything they need, Head said. One Iraqi refugee man helped by Catholic Charities was not able to take a job offered to provide for his family because he did not have transportation to drive 30 minutes away.

“That’s the kind of reality,” refugees face, Head said, which is why Canopy must provide a “complete support network including job training and transportation. … I’ve never met a family that didn’t have this incredible story of both great hardship to overcome and great gratitude for being here.”

“They had been in a refugee camp for 18 years” in Nepal, Schnekloth said. “Their son and daughter were both born there and came over in their teens.

“… I’m still in regular communication with them … Try to remember the human part; If you had fled your country because you were being persecuted in some way, religious, political, economic, ethnic, what do you think you’re looking for? You want a home, you want safety, you want to raise your child in a place with good education … refugees are super driven to become a part of the community.”

For Head, who attends St. Joseph Church in Fayetteville, Canopy NWA is another way to follow Jesus’ example.

“How many times did he go against the common prejudices? The common wisdom like not interacting with foreigners, the Samaritan hurt on the bridge, or speaking to an unknown woman at the well? He was always teaching that the moment when we are challenged by our fear of helping people unlike ourselves is the moment God is teaching us,” Head said. “He is giving us a chance to see that we are all children of God and all brothers and sisters. Jesus’ message was always one of inclusion. So it makes me very proud of my community that so many diverse faith and community groups want to help refugees.”

More information can be found at CanopyNWA.org.

27 golf teams tee off to raise money for Catholic Charities

One Church gets off to a good start for St. Luke Church