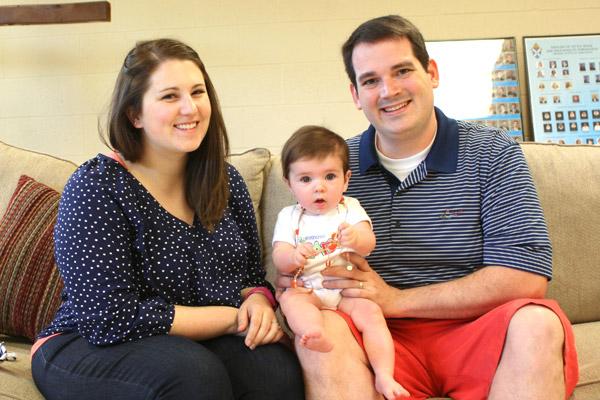 Aprille Hanson
Kristin and Nick Ables met in 2010 on CatholicMatch.com, a dating website for Catholics, and welcomed daughter Siena Catherine last year. Their story was featured on the website and Siena was sent a CatholicMatch onesie.

Aprille Hanson
Kristin and Nick Ables met in 2010 on CatholicMatch.com, a dating website for Catholics, and welcomed daughter Siena Catherine last year. Their story was featured on the website and Siena was sent a CatholicMatch onesie.

Kristin Ables, youth minister at Our Lady of Good Counsel along with her husband Nick, admits that when the couple first met in person after only talking online and by phone, she “wanted to be safe about it.”

“Nick could have been a serial killer for all I knew. Someone can be totally awesome through text messaging and on the phone,” but different in person, she said. “We met in a public place; I told my parents where I was going. … Always tell someone where you’re going, who you’re meeting. You can’t let your heart cloud your judgment.”

Here are some tips from a U.S. News and World Report article on how to safely date online:

In a fast-paced world of evolving technology and social media, the idea of love at first sight is often traded in for intrigue at first click.

For adults savvy with a smart device or computer and committed to finding love, online dating has become a real prospect. According to a Pew Research Center study in 2015, 15 percent of adults have dated online through websites and apps.

The stigma and misconceptions about finding love online are changing and it has become a viable option for Catholics.

When Pew Research conducted a survey to find out the online dating habits of U.S. citizens in 2005, it was considered a “subpar way” to meet someone.

Nick and Kristin Ables, youth ministers at Our Lady of Good Counsel Church in Little Rock, married in 2012 after meeting online two years earlier. It was the first time either had created an online dating profile on CatholicMatch.com.

“I think it goes back to not wanting to tell people first off you have an online (dating) account. When I was in college I thought that makes me look desperate and it’s kind of sketchy too,” Kristin said.

They met in person for the first time on New Year’s Day 2011, when Nick, from Little Rock, visited her at college in Tennessee.

“When we first went to dinner with her friends, she had this whole back story of how we met” rather than online, Nick laughed. “I think it was more about what we thought people would think as opposed to what they thought … nobody we’ve told has ever said anything about it other than ‘oh that’s cool.’”

The Ables, who welcomed daughter Siena Catherine Aug. 22, are part of just 5 percent of Americans who married or are in a committed relationship with someone they met online, pewresearch.org stated.

Branson Shaffer, 24, a history and religion teacher at St. Edward School in Little Rock, found his girlfriend a year and a half ago online.

“It was, ‘Oh man, online dating is only for if you can’t find somebody.’ You were so bad at dating people you know, you had to go online. Which I think is a terrible way to look at it,” he said. “It just opens up so many options of people you never would meet but would be a perfect match for you.”

Wide World on the Web

While Nick and Kristin, living in different states at the time, both admit they had to “weed out” people they met online, it was an opportunity to meet people not limited to their area, who shared the same values.

That built-up connection helped, considering the first time they met did not set off any sparks.

“I told him you’re going to make some girl very happy one day,” Kristin laughed. Nick added, “It was just so different being in person. But, I just kept texting her.”

At one point, the couple had 15,000 texts together in one month.

For Shaffer, a bad break-up pushed his friends to intervene for him.

“They said, ‘No Branson, you need to get out there and at least meet people.’ They downloaded on my phone, of all things, Tinder,” Shaffer laughed. Tinder, a dating app, has become known more for casual dating, rather than finding a real relationship. “They wouldn’t stop hounding me about it. I said, ‘OK I’ll do it’ … Olivia was really the first person I talked to and we’ve been together ever since.”

Shaffer joined the Church in 2014, and met Olivia Collins, 21, soon after.

“She had in her bio all this cool stuff — she was into film, art and music and I thought this was someone I can get along with,” Shaffer said. “But the first thing she had on there was like ‘bride of Christ.’ I thought, ‘OK, I can actually relate.’ Unless this is a trick, she’s advertising she believes in God and follows him. I’ll chance this one.”

Collins said Shaffer “seemed very intelligent, that’s what kind of drew me to him.” Plus, his profile photo was on a rock plateau, which was Masada in Israel.

“Her first question was, ‘Where was your picture taken? That looks awesome’ and then she asked if it was a pilgrimage. Kind of our first talk was about religious beliefs, the first thing you’re not supposed to talk about,” Shaffer laughed.

Both students at UCA, the two were studying in different departments and likely never would have crossed paths. Collins, who was nondenominational, joined the Church this Easter and the couple plan on getting engaged.

“I think it just opens up the possibilities of finding somebody you’re actually compatible with; especially if you don’t want to date people in your friend base,” Collins said of online dating.

While there are several reputable dating sites, CatholicMatch.com is committed to helping people find those that share Catholic values.

“We are a major tool in the lives of people looking for sacramental marriages,” said Robyn Lee, managing editor of CatholicMatch Institute. “We provide content and education for Catholics so they can better discern dating and marriages. It’s really evolved.”

CatholicMatch started as Saint Raphael.net in 1999 and grew into a dating website that counted its one millionth registered profile in 2013, with thousands of marriages reported each year.

“‘If you’re online you’re a freak and only ax murders are on there,’” Lee said of the old way of thinking. “There’s a total mentality change. The internet and social media have become a part of our daily lives.”

The company provides an online guide to using CatholicMatch for the best results, Lee said.

“Online dating isn’t this magic thing. If you buy a membership to a gym are you automatically going to be buff and thin? It’s the same concept with online dating,” Lee said. “It’s a tool; it’s not meant to completely fill your life. Relationships happen face to face. We encourage people to use this tool to meet people when they normally wouldn’t.”

It is free to join, but there are also paid subscriptions that provide more content, Lee said.

While a person does not have to be Catholic, several questions will be asked before a profile is posted, including: Do you accept Church teaching on the Eucharist, sanctity of life, premarital sex, the Immaculate Conception, etc.?

Lee said having “deal breakers” are healthy, but some take it too far.

“Are you excluding someone who is a Yankees fan because you’re a Red Sox fan?,” Lee said. “It’s very good and healthy to have those deal breakers about faith and raising children. But take a step back and think — are you making a list of a perfect spouse and does that person not exist?”

Instead of just being an online dating presence, CatholicMatch has kept close ties to the Church, officially launching CatholicMatch Institute (catholicmatch.com/institute), an online resource with information and blogs about Catholic teachings on marriage and dating for single people, couples, Church leaders and diocesan family life offices in 2013.

Though online dating may not be that love-at-first-sight story, it is still another way for God to be the supreme matchmaker.

“I think through online dating it really allows God to work because he’s going to allow you to meet the person you’re meant to be with,” Nick Ables said.

Kristin Ables, youth minister at Our Lady of Good Counsel along with her husband Nick, admits that when the couple first met in person after only talking online and by phone, she “wanted to be safe about it.”

“Nick could have been a serial killer for all I knew. Someone can be totally awesome through text messaging and on the phone,” but different in person, she said. “We met in a public place; I told my parents where I was going. … Always tell someone where you’re going, who you’re meeting. You can’t let your heart cloud your judgment.”

Here are some tips from a U.S. News and World Report article on how to safely date online:

Click here for Part 1: Exploring the Church, dating, sex and the single life

St. Edward School in Little Rock to close in May