God calls the faithful to show mercy to those physically, mentally in prison 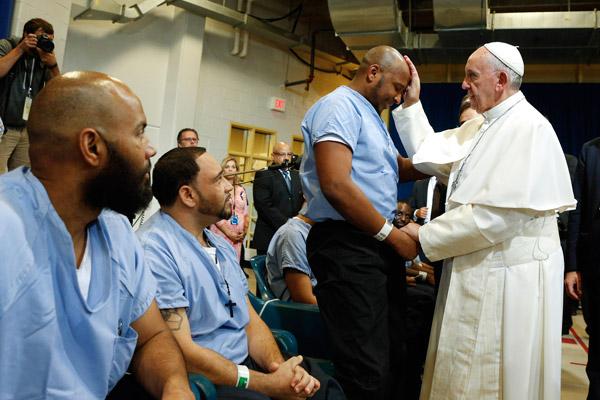 CNS / Paul Haring
Pope Francis blesses a prisoner as he visits the Curran-Fromhold Correctional Facility in Philadelphia Sept. 27, 2015. Visiting the imprisoned is perhaps the most challenging among the works of mercy.

CNS / Paul Haring
Pope Francis blesses a prisoner as he visits the Curran-Fromhold Correctional Facility in Philadelphia Sept. 27, 2015. Visiting the imprisoned is perhaps the most challenging among the works of mercy.

During this Year of Mercy instituted by Pope Francis, we’re called to become extensions of God’s mercy to others, particularly through the spiritual and corporal works of mercy — acts of charity and love toward others.

But one corporal work of mercy may prove a bit more challenging to carry out — visiting the imprisoned. How are we supposed to visit the imprisoned?

Fears, anxiety, depression and hopelessness are all “prisons” that hold us captive, keeping us from feeling the love of God. They cage us in, stopping us from becoming children of God and from becoming the person he intended us to be. We may not have committed a crime per se, but we are incarcerated just the same.

Our Lord had compassion for those imprisoned by invisible walls as well as those imprisoned by real walls. There are numerous examples in Scripture, but the one that comes to mind is the story of the Gerasene demoniac (Mark 5:1-20) cured of his affliction and released from his cell by Jesus.

Jesus and his disciples had crossed the Sea of Galilee and entered Gerasa. There, he found a man who had long been tormented by demons and lived among the tombs. No manner of restraint could keep him from causing harm to himself or to others. The people of Gerasa feared him.

Amid the man’s shrieks, Jesus commanded the demons to leave him. At their request, Jesus sent the demons into a nearby swineherd. The swine then ran to the edge of a high cliff and jumped off, falling into the water and drowning. Only then, the man was again in his right mind and made capable of living a normal, productive life.

The Gerasene man had been imprisoned by demons, kept in a jail of torment that prohibited him from living a life of love and fruitfulness with family and friends. Jesus visited him in this prison, so to speak, by seeing him, not as he was, but as he could and should be: a free and joyful child of God.

So, too, should we see and help those who are imprisoned by a variety of walls. We should see them, not as they are, but for what they should and can be: free and joyful children of God. They need us to visit them in their prisons and to minister to them with compassion.

We may not be able to cure them of their torment, as Jesus did with the Gerasene man, but we can be for them a reflection of the light in their darkness.