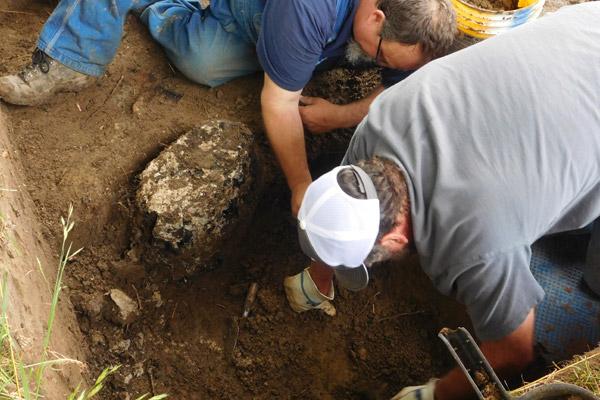 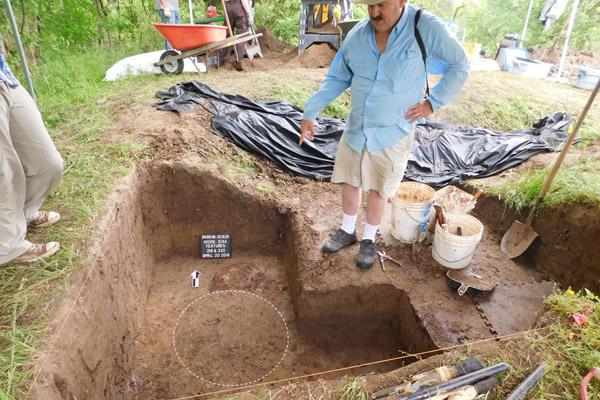 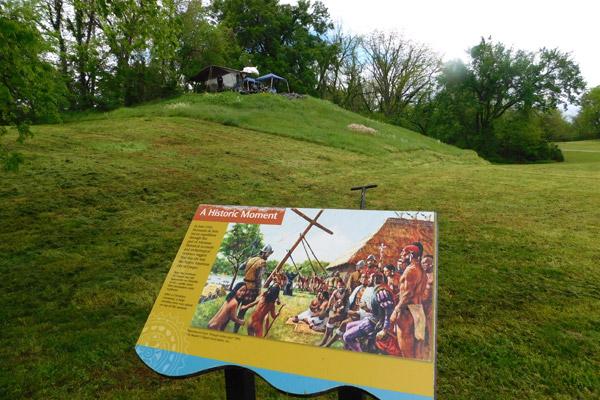 Arkansas site may bear a cross from 1541 expedition 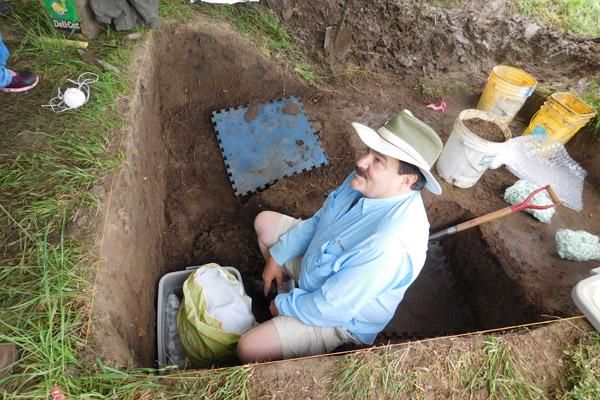 Jessica Crawford, The Archaeological Conservancy
Archaeologist Jeffrey Mitchem and others wrap up wooden remains at the Parkin Archeological State Park April 19 they think may be a cross erected in 1541 by Spanish explorers with Hernando de Soto’s expedition.

Jessica Crawford, The Archaeological Conservancy
Archaeologist Jeffrey Mitchem and others wrap up wooden remains at the Parkin Archeological State Park April 19 they think may be a cross erected in 1541 by Spanish explorers with Hernando de Soto’s expedition.

Hernando de Soto is known for being the first European explorer to travel the Mississippi River. His expedition was seen as a failure because he and his crew didn’t find gold or passage to China.

• 1539: Set out for exploration of Cuba. Continued with conquest of area now known as Florida and southeastern U.S.

• 1541: Crossed Mississippi River into what is now Arkansas

The first Catholic liturgy is believed to have happened in Arkansas 475 years ago, but archaeologists are now working to authenticate physical proof of that celebration near the St. Francis River, about 40 miles from the Mississippi River.

The Parkin Archeological State Park in Cross County is home to what could be the physical evidence of a Catholic liturgy in the form of a cross, hidden in a mound until April 18. A team of archaeologists began to unearth what is believed to be the base of that cross erected by Spanish explorers with Hernando de Soto’s expedition in 1541.

“The only thing we can really say is it’s the first recorded Christian ceremony held in the state of Arkansas. From the Catholic perspective especially, we know it was a Catholic-Christian ceremony,” said Jeffrey Mitchem, Arkansas Archeological Survey’s research station archaeologist for Parkin. The Survey, part of the University of Arkansas System, studies and protects archeological sites in the state.

Now that the wood has been excavated, it’s a matter of authenticating it.

De Soto traveled around what eventually became Arkansas for a year before leading his men back to the Mississippi River in southeast Arkansas. In the three years since they had first landed in what is the southern United States, almost half of the crew had been killed. De Soto died from an unknown fever on May 31, 1542, at Guachoya, what is believed to be Lake Village in Chicot County, according to the Encyclopedia of Arkansas.

Four historical narratives — three of which were written by de Soto’s crew — speak of a cross erected on July 5, 1541 (according to the modern Gregorian calendar) on the largest mound where the Native American chief’s home was located. Artifacts, including a bead and some bells, are evidence the Europeans did visit Parkin.

In 1965, archaeologists began surveying the Parkin area to determine if deposits on site were enough to turn it into a state park. In 1966, the wood was found and samples were collected.

“I’m thankful that they didn’t just yank out the whole thing because we wouldn’t be talking now if that happened,” Mitchem said.

Mitchem discovered the samples in 1992 and sent them off to be radiocarbon-dated, which has 95 percent accuracy but only provides a range of dates, he said. The lab dated the wood anywhere from 1515 to 1663.

As other projects took priority, Mitchem waited, hoping one day he and others would be able to authenticate the cross and dig for more clues.

Last year, the Elfrieda Frank Foundation in New York gave the team a grant around $20,000 to excavate the mound. Mitchem and his team “kept everything quiet” about starting the dig.

“It was hush-hush. We had park rangers stay out overnight in case word leaked out,” to make sure the site was not disturbed. He also picked his team carefully.

“I knew they were people who could dig very accurately and quickly … We knew everything above the post was disturbed; we did screen the soil sift it for artifacts. We found old Budweiser cans, broken glass from beer bottles.”

About three feet down, the base of the cross was found burned, but the charred remains helped preserve it, while other pieces rotted away. Mitchem said it is unclear when the burn took place.

“We finished on Friday (April 22). We had reached the cross on Tuesday,” Mitchem said, adding that what was recovered is “a little less than a foot in terms of height; the width, about a foot and a half and maybe nine inches perpendicular.”

The team plans to send several samples for radiocarbon dating, which can take a few weeks to a month to see if the results match what was determined in the 1960s. On April 25, samples were brought to Dr. David Stahle, a dendrochronologist and distinguished professor of geosciences at the University of Arkansas in Fayetteville, to determine a more precise age of the tree, using tree rings from the bottom of the post. It can take a week or more to find out the results, Stahle said.

De Soto, a Catholic, arrived with about 600 explorers in Florida in 1539, searching out gold and riches throughout the southeastern part of what is now the United States, often ruthlessly toward Native Americans, according to the Encyclopedia of Arkansas. When he reached Arkansas on June 28, 1541 (according to the modern Gregorian calendar), he was not attacked by the local Casqui tribe, according to the narratives.

“You think about this — why did he do this here, because he didn’t do this everywhere,” Mitchem said of erecting the cross.

One historical narrative that included several interviews from de Soto’s crew is attributed to historical chronicler Garcilaso de la Vega and was written about 40 years after the expedition. It is the narrative often cited, which stated that 2,000 people attended the Mass, cheering the cross. However, Mitchem said the accounts in that narrative “differ pretty drastically” from the other three.

While there was a drought during that time, Native Americans wanted the cross erected to pray to God to help end the drought, according to the narrative. It states they knelt and kissed the cross like the Spaniards.

“We just don’t know what the actual conversations were … We can say without a doubt the Casqui people were not converted to Christianity by this act,” Mitchem said.

An Italian carpenter on the expedition ordered the men to chop down a tree that he could make into a cross.

“They sort of mention in one of the narratives they went out looking for one of the tallest, straightest trees they could find. We know they didn’t get the very bottom, because Bald Cypress trees are very large around the base making it harder to cut,” Mitchem said. “So I’m sure somebody sort of shimmied up there.”

Once the cross was built, about 100 men helped stand it upright, though the exact height was unknown.

“It must have been quite a chore to do this to tell you the truth,” Mitchem said, with the diameter almost at two feet.  “It obviously was sturdy enough and did fine; there’s no evidence it fell over.”

The expedition had eight priests, including two Dominican friars, a Franciscan and one member of the Order of the Most Holy Trinity.

“It would seem to me it’d be difficult and awkward in that situation to actually have Communion,” as most of the Native Americans would not understand its significance, Mitchem said. “And also by this time, they certainly had no wine left and no sacrament because they had been wandering around for two years by the time they got there and had not been resupplied.”

Mitchem added that only three of those religious survived the expedition — two Dominicans and the Franciscan.

“The Indians often would raise a post atop the chief’s mound that they would perform ceremonies around,” Mitchem said. “We can assume or infer anyway” that the cross was kept there after the service for use in other traditional ceremonies.

If the results do authenticate the cross as much as possible with the current science and the samples collected, Mitchem said it’s a notable find for not only Arkansas but the archeology world.

“It’s significant for local, state and national history really. We really can say this is the first Christian ceremony in Arkansas and (those from) the de Soto expedition were the first Europeans to set foot in Arkansas, the first who met native Arkansans,” Mitchem said. “ … In archeologically it’s always wonderful when you have some historical written documentation you can tie in with the archeological data we can actually see … to say we have actually found the physical remains of the activity we have in writing.”

Hernando de Soto is known for being the first European explorer to travel the Mississippi River. His expedition was seen as a failure because he and his crew didn’t find gold or passage to China.

• 1539: Set out for exploration of Cuba. Continued with conquest of area now known as Florida and southeastern U.S.

• 1541: Crossed Mississippi River into what is now Arkansas

A look back at Catholic news statewide, globally in 2015

Held to a higher standard as disciples of Christ