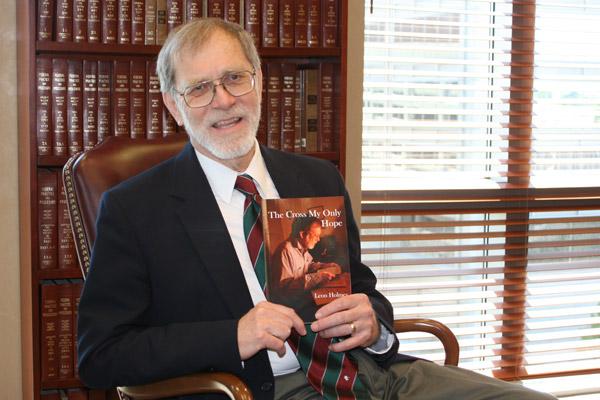 Aprille Hanson
U.S. Federal Judge Leon Holmes re-released his self-published conversion story “The Cross My Only Hope” this year. Holmes writes about his journey to Catholicism from being an atheist and then an evangelical.

Aprille Hanson
U.S. Federal Judge Leon Holmes re-released his self-published conversion story “The Cross My Only Hope” this year. Holmes writes about his journey to Catholicism from being an atheist and then an evangelical.

In 1981, Federal Judge Leon Holmes caught “The Catholic Disease,” a term he coined in his self-published book, “The Cross My Only Hope.”

“From the outside, being raised in a Baptist environment and being an evangelical, Catholicism looks very strange. It looks like all the statutes, Mary and the pope and it’s all very odd. Yet I had this desire to understand it from the inside,” Holmes said, often reading Catholic books and attending Mass until the disease quieted down. “I think we described it in the book as going into remission. But then I’d go through this process again of studying, reading, thinking, praying, going to Mass and this went on for several years.”

Holmes, who was appointed to the United States District Court for the Eastern District of Arkansas by President George W. Bush and confirmed to the position in 2004, took about two years to write his conversion story. It started as a letter to his oldest son Josh for a Christmas present, answering why the family is Catholic. He self-published in 2010 with the help of his son Jeremy Holmes, an assistant professor of theology at Wyoming Catholic College in Lander, who formatted and edited the story. It was re-released in March through CreateSpace, a part of Amazon.

“Jeremy chose the title. There’s a part in here where I say my hope is in the cross … and it’s taken from a sermon by Bishop Andrew McDonald and Jeremy picked up the title from that,” Holmes said. “It’s kind of the theme of the book.”

He was born in Hazen to missionary Baptist parents and was baptized at 7 years old. By the time he attended Arkansas State University in Jonesboro, he “shed any signs” of his Christian faith.

The book begins when he met his future wife Susan, a journalism major who happened to sit across from him at the school library, waiting to read the Sunday newspaper after him.

Holmes explains that on that evening, Sept. 19, 1971, he looked very different than the federal judge people see today.

“ … You would have seen a barefoot boy, 20 years of age, sitting at one of the tables on the first floor and reading the Sunday newspaper,” Holmes wrote. “He was wearing bell-bottomed jeans and a tie-dyed T-shirt. His hair came nearly to his shoulders. Neither the boy nor his clothes had been washed in the recent past.”

Though Susan initially turned down his request for a date, the next day she accepted — after he cleaned up a bit. “The night I met her I knew I was going to marry her,” he said and they married four months later on Jan. 28, 1972.

“If you want to single out two events, two life-changing experiences that put me on a completely different road than I was on before it would be meeting Jesus in person I think is the way I would describe it, a real encounter, life-changing encounter with God and I don’t think that would have happened if I had not met Susan and been changed by that experience of entering into this profound, deep love relationship,” Holmes said.

Throughout the book, Holmes explains what he’s learned through his faith, from the significance of the sacraments to important biblical teachings, to stories of his personal life and career. While his story is powerful, one of the unique and important puzzle pieces to his overall conversion comes in the last chapter titled “Susan’s Side of the Story,” a 15-page account of what she went through as someone who always had a strong faith, but had believed Catholics were not Christians.

Susan writes how she prayed often that her husband would come to know Jesus, but Catholicism was too far out there. However, it is exactly the path God also would lead her down after her husband’s “Catholic disease” kept reoccurring and she began to form important friendships with Catholics.

“The disease had been in remission for some time and then returned around 1987 or so,” Leon Holmes wrote. “I prayed, ‘Lord if you want me to be Catholic, I am willing; but please make my wife a Catholic too.’ I made no mention of it to Susan, but a few days later, she came to me with tears in her eyes and said, ‘If you want to be a Catholic, I’ll be a Catholic with you.’”

The couple joined the Church on March 25, 1989, along with their five children at Our Lady of Good Counsel Church in Little Rock.

The couple still attends Good Counsel, but has also attended the Cathedral of St. Andrew through the years. They have 15 grandchildren.

“A lot of my life was centered on understanding doctrines and who was right and who is wrong and Catholicism kind of settles that and lets me focus on cultivating the relationship with God,” Leon Holmes said.