Syrian refugee says ‘We need to look after each other’

Al-Muqdad originally resettled in Fayetteville after fleeing home, says he misses it 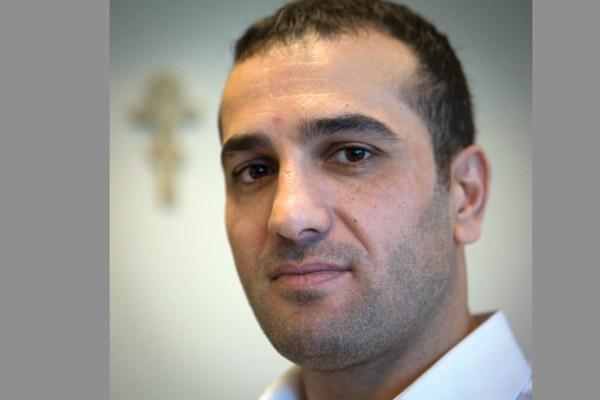 CNS / Chaz Muth
Omar al-Muqdad, a Syrian refugee who resettled in the United States in 2012 with the help of the U.S. bishop's Migration & Refugee Services and Catho-lic Charities of Arkansas, is pictured in this April 15 photo in Washington. He has seen both sides of the refugee crisis, including helping Iranian refugees years before he fled his homeland.

CNS / Chaz Muth
Omar al-Muqdad, a Syrian refugee who resettled in the United States in 2012 with the help of the U.S. bishop's Migration & Refugee Services and Catho-lic Charities of Arkansas, is pictured in this April 15 photo in Washington. He has seen both sides of the refugee crisis, including helping Iranian refugees years before he fled his homeland.

WASHINGTON — Omar al-Muqdad has seen both sides of the refugee crisis.

In 2004, he assisted Iraqi refugees in his home country of Syria. And then nearly a decade later, he escaped the civil war in his country by first going to Turkey and then finding a temporary home in 2012 in Fayetteville where he was the only Syrian refugee in the state.

“I thought I knew what it was like to be a refugee, then I became a refugee and I needed someone to help me,” he told Catholic News Service April 15.

He realizes there is no rule requiring people to help refugees, but he feels there is an underlying premise that they should.

“It’s a human responsibility. We need to look after each other. You also don’t know if (this situation) could happen to you or someone else,” said al-Muqdad who met with officials of the U.S. Conference of Catholic Bishop’s Migration and Refugee Services in mid-April to share his experiences.

Al-Muqdad, 36, was assisted by MRS, Catholic Charities of Arkansas, the Diocese of Little Rock and St. Joseph Parish in Fayetteville. They helped him find an apartment and get what he needed, including rides to places while getting established in the United States and working toward citizenship. Today he lives in Arlington, Va., and works as a journalist.

He has worked on documentaries about refugees. His current work is about his own experience called “Back to Arkansas.”

When asked about Fayetteville, a far cry from the ancient Syrian town of Bosra where he lived, al-Muqdad, only has good things to say. He says the small town was friendly and beautiful. He also was able to find good Syrian food, which was definitely a plus.

“I really miss that town. I was touched by the treatment I received which was the opposite of what I heard: that people in the South don’t like strangers.”

“People opened their homes for me and just wanted to help,” he said, adding, “I didn’t feel for a second that I was a stranger there.”

And that’s what has made it all the more difficult for al-Muqdad to understand how Arkansas Gov. Asa Hutchinson could say last fall that Syrian refugees would not be welcome.

“What was even more shocking is to learn that I was the only Syrian refugee that was officially admitted and granted residency in that state,” he wrote in a column in December for The National newspaper.

He realizes many of the governors who spoke out against Syrian refugees did this for security concerns, which he said he understands, to a point.

"As a Syrian who, like many other Syrians, suffered from the lack of security, I am completely in favor of a security check on everyone who wants to enter the country," he wrote. "But that doesn't mean it is possible to generalize the threat as coming from all refugees, or to paint them all with a single brush, or to say to all of these desperate people: 'You are all a threat and need to stay out.'"

He has also been disheartened by comments from political candidates about shunning refugees, but he has confidence Americans will do the right thing on the issue.

Al-Muqdad pointed out that terrorists and refugees are not one and the same and stressed that terrorists would have a hard time getting into the U.S. through the refugee path which is time consuming and involves many meetings. He said he was interviewed twice by U.N. officials and multiple times by U.S. immigration officials. If there are gaps in your story, you won't be admitted, he added.

"It's a really tough process, and it's OK," he said, but countries should not shut their doors out of fear, he added, calling this the "wrong approach to solve this issue."

At the end of March, U.N. Secretary-General Ban Ki-moon urged governments around the world to take in more Syrian refugees.

So far, the Obama administration's goal of settling at least 10,000 Syrian refugees by Oct. 1 has not nearly been met. The U.S. Department of State reports that about 1,200 refugees have been resettled during the last six months. Overall, the U.S. has resettled about 3,100 Syrian refugees since 2011 when the civil war in Syria began. Turkey has the largest settlement of Syrian refugees followed by Lebanon and Jordan and then European countries.

During a March 30 conference in Geneva focused on refugees, Ban called the amount of people fleeing Syria "numbing."

"But these are all individuals with tragic stories: Children who have lost their parents; Teenagers who are suddenly in charge of their families; Men and women, old and young, who have experienced terrible atrocities -- some carry shrapnel in their bodies. All bear the mental scars of displacement," he said in his remarks, posted on the UN website.

Al-Muqdad admits he has been frustrated with the American response to Syrian refugees, but he has also been heartened by "other voices" showing their support, including Catholic and Lutheran groups.

He says he is not a religious person and describes himself as "still investigating" his faith, but he is touched by what faith-based groups have done for him and other refugees.

Four years after his arrival here, Al-Muqdad who speaks Arabic, English and Italian, says it was easy to fit in and he has a lot of friends here from many nationalities.

That's not to say he doesn't long for his homeland. "I miss it so much, but it's war there now and it's breaking my heart," he said.

While he waits for peace to return to Syria, he is focused on his new path.

"I have started to build a life here," he said. "I'm an American now."