A Catholic you want to know: John Barnes 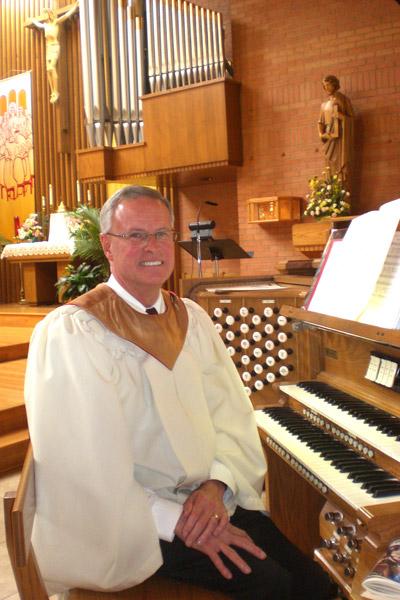 Aprille Hanson
John Barnes, director of music at St. Peter the Fisherman Church in Mountain Home, said the organ is the “king of instruments.”

Aprille Hanson
John Barnes, director of music at St. Peter the Fisherman Church in Mountain Home, said the organ is the “king of instruments.”

Why you want to know John Curtis Barnes: For 35 years, John Barnes has been director of music, serving as the organist and choir director at St. Peter the Fisherman Church in Mountain Home. Except for the church’s first pastor, Barnes has played for every pastor (nine) whose name appears on the doors of St. Peter and 14 associate pastors. In 2014, he retired from Roller Funeral Home, where he served as regional manager and the local branch manager, funeral director and embalmer. He leads the adult choir at the church, which has 22 members. The children’s choir has 15.

Well, I continue to read. I read Christian Prayer, the laity version of the Liturgy of the Hours. I pray the rosary, I go to daily Mass. I adore the good Lord in the Blessed Sacrament. I try to have a deep prayer life.

You grew up in the Center Ridge area as a Baptist. What made you convert to Catholicism?

I converted in the late 1960s. I saw the movie “The Song of Bernadette” and that inspired me to explore the Catholic Church and so that’s what I did. I converted under the pastorate of Father Lawrence Maus of St. Joseph’s Church at Catholic Point (Center Ridge).

When did you first learn how to play the piano and organ?

I started taking piano lessons in first grade; my mother pushed me into it. I started playing for church when I was 10 years old. So I’ve been playing for church 54 years. I started taking organ lessons when I was going into my freshman year of high school in 1966. I’ve always enjoyed the organ. I used to watch St. Patrick’s Cathedral Midnight Mass in New York, back in the ’60s they broadcasted it. I heard that magnificent organ and the choir and it was so nice.

Tell me about the accident that almost caused you to lose the ability to play.

When I was 18 years old it was during a penicillin shot, it hit the radial nerve and paralyzed my arm. I couldn’t move my hand for nearly two years. I entered the Church because of Our Lady of Lourdes so I sent off to get some Lourdes holy water thinking, “Well, she’ll heal me.” I wouldn’t begin to say it’s a miracle, I wouldn’t claim that, but from the second operation the doctor wouldn’t give me a million to one shot for ever moving my hand again. Then I started moving my hand. His exact words were, ‘It’s a miracle of God.’ I give all the credit of all I can do to (God).

What do you think sets St. Peter’s music department apart?

The music program here would be one of the best in the Diocese of Little Rock for sure because of so many people here who have talent and sing. … The contemporary group sings and plays at the 8:30 Mass. I’ve been blessed with Renee Cox and Laura Waters, my assistant organists. I play three Masses a week, 4 p.m. (Saturday), 7 a.m. and 11 a.m. (Sunday). I play for the Benediction of the Blessed Sacrament on Wednesdays usually. Laura plays the keyboard with the 8:30 contemporary group. They also substitute for me.

Any funny moments you remember from playing at a Mass?

I had a cantor up there, I played one melody for the “Alleluia” and she sang the verse then you respond with the alleluia and I did that, but I did something (a melody) completely different than I played before … The look of horror on her face was terrible … also, I’m playing for weddings of people who I’ve played at their parents’ weddings.

What is your favorite song to play?

“Holy God, We Praise Thy Name.” If I had any hymn sung at my funeral, that’d be it. I just love it, it’s so theological and, of course, it’s German.