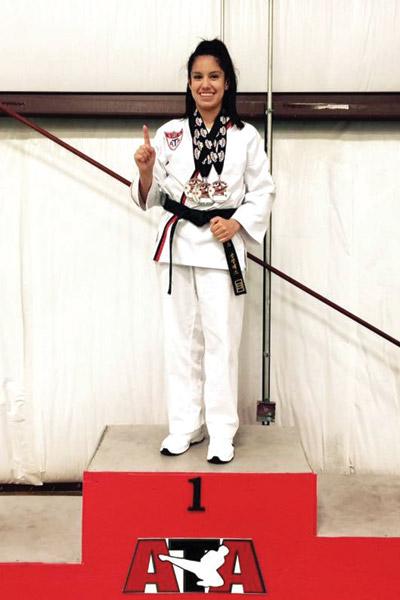 Angeles Gonzales tops the winner’s podium at the 2015 ATA Regional Tournament. Gonzales, who attends Blessed Sacrament Church in Jonesboro, has been trained in the martial arts by her parents since age 3.

Angeles Gonzales tops the winner’s podium at the 2015 ATA Regional Tournament. Gonzales, who attends Blessed Sacrament Church in Jonesboro, has been trained in the martial arts by her parents since age 3.

Angeles Gonzales may not sound that imposing at first meeting, but be advised: This 16-year-old, who has been practicing tae kwon do since the age of 3, speaks softly and carries a big kick.

“When I started I was too little to really understand what was going on,” she said. “When I got my black belt, I was around 8 or 9 years old. From that point on, I knew I really liked it.”

Now a third-degree black belt, Gonzales has also found success in competition. She’s won 26 state titles and last year won a district title, advancing her to the ATA World Championships in Little Rock. There, she placed in the top 10 in both the sparring and combat sparring events.

“Marital arts has taught me a lot of things, not just to kick and punch but also confidence and to be able to believe in myself,” she said. “When I have a goal, I know I can achieve it.”

Martial arts is unlike other activities in that it defies any one definition, an activity of mind, body and soul that’s hard to pin down. Competitive martial artists compete all the way to the Olympics but the most dedicated athletes will tell you it’s not about contests and rankings.

The Gonzales family — who attends Blessed Sacrament Church in Jonesboro ­— own and operate ATA Martial Arts Jonesboro, but martial arts are far more than just livelihood.

For Angeles, martial arts is the yardstick by which she measures her way through life. In competitive titles and rank, she is approaching her brother, Santiago, a fourth-degree black belt who’s completing his degree at Arkansas State University. From an athletic standpoint, martial arts training gave her explosiveness put to use on the volleyball court.

And in all other areas of life, the activity has given her even more lasting tools.

“I remember everything about her journey in martial arts,” said her father, Eduardo Gonzales a sixth-degree black belt with 30 years in martial arts to his credit. “Her brother has a very strong personality as a leader and has a lot of natural confidence; she wasn’t like that.

“Martial arts helped her confidence through training and tournaments, sometimes not going the way she was expecting,” he said. “Perseverance is something that she has. She’s got perseverance and she has determination. She doesn’t express like my son and other students but she really wants to accelerate, she wants to be the best to do this and in everything.”

At a phase in life when many teenagers test their boundaries favoring peers over parents, Angeles plays it strictly by the book, another by-product of the discipline martial arts demands.

“Angeles was always very calm, always following everything in all situations,” said Carolina Gonzales, Angeles’ mom and herself a sixth-degree black belt. “She never did anything to make me feel bad. She just focuses on this and focuses on everything that she has to do and follow everything that teachers say to her.

“We always say we are fortunate to have a daughter like that, because in these times that we’re living now with all the people around her, that never changed her. She’s always very sweet and a very good daughter.”

“Well, my parents have always kept me in check because they’re both martial artists,” laughed Angeles. “And yes, martial arts helped me with self-control and stuff like that, but I know what’s right and wrong from my parents’ teaching and my brother, too. He’s also been a role model for me since he’s older. So no, I haven’t ever rebelled.”

Martial arts was never more important in Angeles’ life as it was in the family’s journey to the United States. When Eduardo came here in 2003 from his native Paraguay, it split the family for four long years while the documentation process ran its course.

Even after reuniting in Arkansas, Angeles felt as though she traded one brand of separation for another. During this period of adjustment, tae kwon do was a welcome bit of the familiar, a place where technique and dedication to craft defied all borders.

“It was a hard adjustment (especially) trying to get past the language barrier,” she said. “My mom was my go-to role model. She has always helped me with everything that I have gone through so far in school and everything.

“She went to college and she was actually a lawyer in South America and she has helped me so much.”

Today, there’s nothing to
suggest Angeles is anything but your typical American high schooler, except perhaps the ubiquitous “sir” and “ma’am” that dots nearly every sentence.

That, and the four hours she spends at the family business training and teaching every day after school.

“I’ve been teaching for about three years, I teach all ages,” she said. “Teaching helps me to keep practicing my basics and it helps in my leadership skills to go in front of people and teach them.”

Angeles said she plans to continue competing while in college and wants to keep improving enough to represent her adopted homeland one day.

She came close last year, but an administrative error kept her off a junior sparring team, a disappointment she takes in customary stride.

“They didn’t know how many people were supposed to qualify,” she shrugged. “It was supposed to be three and they wrote down four and, bad luck, I was the fourth one. I would still one day like to be part of the Team USA sparring team. That’d be a great honor.”