Conway senior’s disease now in remission; he hopes to be a chef someday 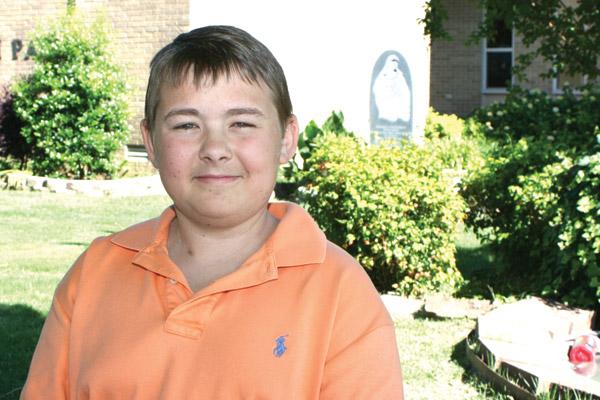 Aprille Hanson
Trey Hickey, a graduate of St. Joseph School in Conway, has struggled with leukemia and side effects of treatment since he was 8 years old. School administrators said he always comes to school with a positive attitude.

Aprille Hanson
Trey Hickey, a graduate of St. Joseph School in Conway, has struggled with leukemia and side effects of treatment since he was 8 years old. School administrators said he always comes to school with a positive attitude.

Trey Hickey, 18, is happiest when he can relax. One of his favorite places to unwind is Lake Conway, sitting beside his dad, Mike, wetting a line.

“One thing my dad and I like to do is go fishing,” Hickey said, saying it’s “peaceful.” “The other day I actually caught a turtle on a cricket (fishing lure). We just let it go back. I remember when we were up in Yellville I caught a big gar.”

The St. Joseph School senior in Conway deserves to be calm more than most after everything he’s been through — two bone marrow transplants for leukemia, seizures, a ventricular shunt in his head to control hydrocephalus (excess fluid on the brain) and end stage renal disease, which requires daily eight and a half hour kidney dialysis treatments. Even one of those illnesses could make someone of any age bitter, but his mother Chata Hickey said her son has never once asked “Why me?”

“I pray a lot,” Hickey said, adding he asks God, “try to help me stay healthy.”

Hickey, a cradle Catholic, has attended St. Joseph School since he was in preschool. At 8 years old, everything changed.

“When I was in third grade during lunch I started to have a fever so my teacher took me into the office and let me lay down for a little. Took my temperature,” Hickey said.

At the emergency room, his white blood cell count, which should be between six and 10, was 103,000 and he was diagnosed with leukemia, she said. Hickey did three and a half years of chemotherapy and several boys at St. Joseph shaved their heads in support when he lost his hair.

For 20 months, he was off treatment, but relapsed in April 2011. His sister Kayla, then 15, donated her bone marrow twice to her brother at Children’s Medical Center of Dallas right before his 14th birthday.

While in Dallas, he developed seizures after taking anti-rejection medications for the transplant. Chata Hickey said even a brain biopsy didn’t point to an exact cause.

“They couldn’t control it, they couldn’t explain it. He started to struggle respiratory wise. At that time the ER doctor had walked in and told us we needed to prepare for end of life,” she said. “I said, ‘We are not ready for that.’”

Hickey was in a coma for four months and while in his coma, he was airlifted to Arkansas Children’s Hospital where the hematologist knew exactly what was wrong. Hickey left ACH that November.

Today, he has a vagus nerve stimulator device in his body, sending impulses to his brain to control the seizures in addition to taking three seizure medications. He takes medication to help the left ventricle of his heart, which was damaged by chemotherapy and radiation. The treatments also caused end stage renal disease. He does dialysis every night while he’s asleep.

His leukemia is in remission.

In the midst of his sickness, Hickey was homeschooled and attended public school for a year but Chata Hickey, who teaches fifth grade at Ruth Doyle Middle School in Conway, said her son belonged back at St. Joseph School.

“He needed to be home. All of these kids have known him and been with him through everything,” she said. “He wasn’t as stressed as much, he was comfortable.”

Throughout the years, faculty and students as well as parishioners have stepped up to pray and host fundraisers for Hickey.

“He has medications he has to take when he eats, those girls sit there at the table with him and say make sure you take this,” his mother said, adding that all the students look out for him.

“A lot of them have been in the same grade as me for a long time I guess they just felt more like family to me,” Hickey said. “I guess they’ve just grown to care about me.”

“It made me feel calm,” he said about the class.

Hickey said he enjoys hanging out with his family and already has some goals for his future.

“To be a chef,” adding his favorite food is his grandmother’s broccoli rice cheese casserole. “There’s really nothing I won’t eat.”

However, his mother said they are all taking one step at a time.

For now, Hickey said he wants the people at St. Joseph Church and School to know how grateful he is for everything they’ve done.

“Thank you for what you have done for me and thank you for having the heart to do it,” Hickey said.