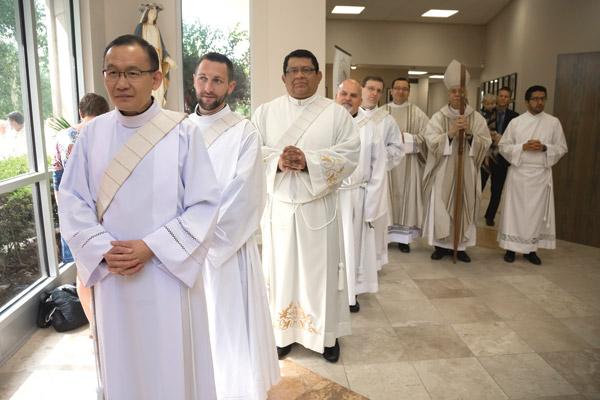 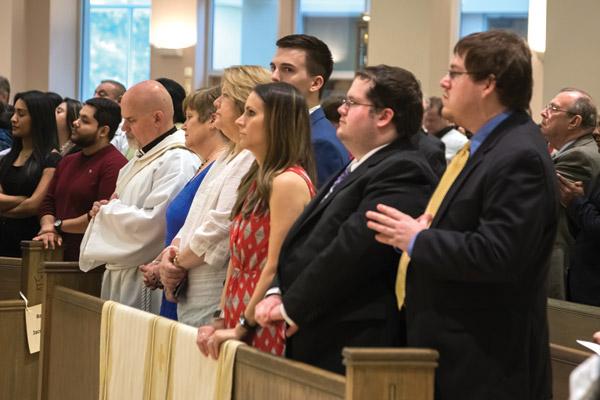 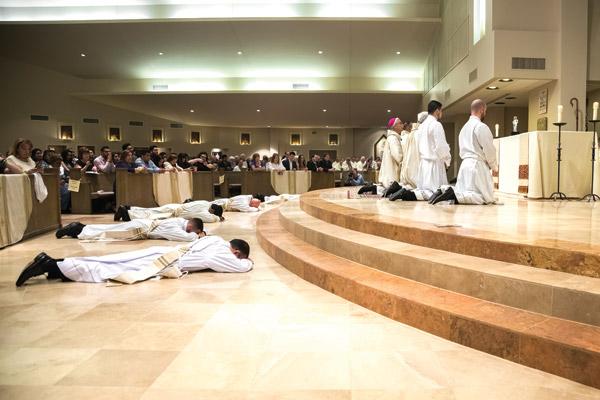 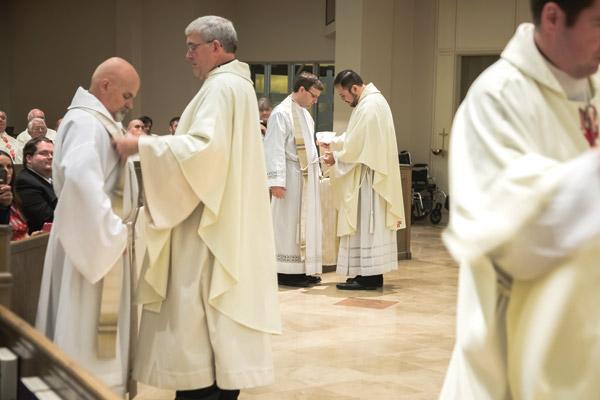 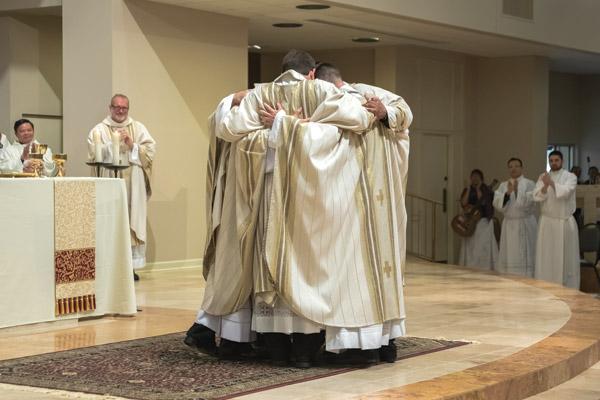 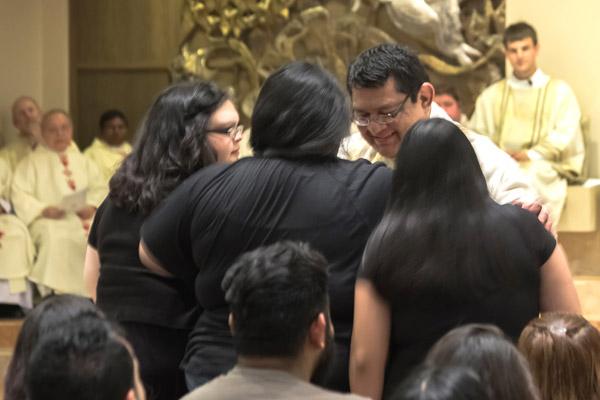 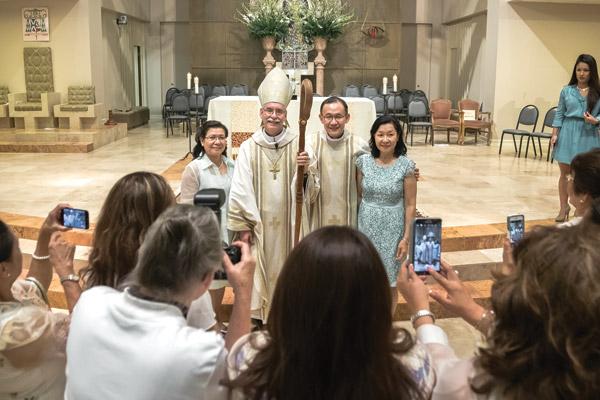 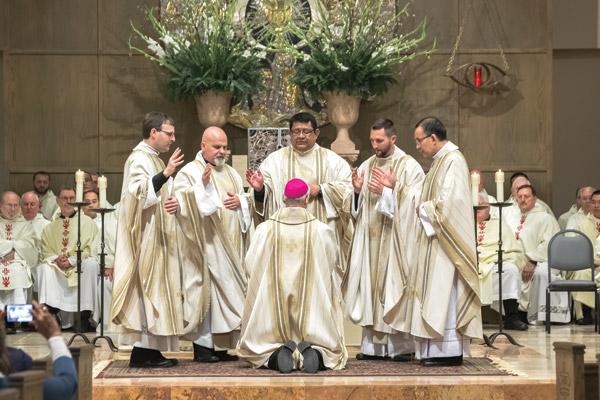 Bob Ocken
Bishop Anthony B. Taylor kneels before the diocese’s five new priests to receive a blessing May 28 at Christ the King Church in Little Rock. The ordination was one of the largest the diocese has seen in 60 years.

Bob Ocken
Bishop Anthony B. Taylor kneels before the diocese’s five new priests to receive a blessing May 28 at Christ the King Church in Little Rock. The ordination was one of the largest the diocese has seen in 60 years.

As the warm sun lit up the sanctuary in Christ the King Church in Little Rock on a Saturday morning, five men laid prostrate before the Lord’s altar as the congregation bowed their heads, singing the words “Lord have mercy” for the litany of the saints.

But it was more than a simple recitation of “St. Michael, St. Gabriel, St. Raphael,” with the echo of “pray for us” — for the newly ordained priests, heaven was opened for the saints and the Holy Spirit to fill their hearts and minds in preparation for this new religious journey.

“Invoking all those holy men who came before us, they were ordinary people following God’s will,” said Father Mario Jacobo, the new associate pastor at St. Theresa Church in Little Rock. “I was asking them to look over my ministry, my priesthood.”

Dr. Joseph Chan, Stephen Gadberry, Mario Jacobo, Norman McFall and Dr. Taryn Whittington were ordained as priests for the Diocese of Little Rock May 28. Among the packed pews and those standing in reverence, the five were surrounded by friends, family, fellow priests, seminarians and deacons.

“I’m grateful to God for them. They’re going to be great priests.” Msgr. Scott Friend, diocesan director of vocations

While these men will forever share an ordination anniversary, their stories are as diverse as they could be: Chan, a doctor; Gadberry, a U.S. Air Force veteran; Jacobo, a carpet store manager/youth ministry leader; Norman McFall, a married former Free Will Baptist minister; and Whittington, who grew up Pentecostal and holds a doctorate in philosophy.

As Father Chan walked to Bishop Anthony B. Taylor, slowly but deliberately, his hands were anointed with oil for the holy task of sharing the Eucharist with God’s people. While each of the priests arrived at this moment in different ways, it was Father Chan who used these hands to build up his strength in both prayer and physical therapy after a 2013 car accident that left him in a coma for two weeks and led to 18 surgeries. His ordination came a year later than originally planned because of it, making the day one of triumph of God’s work in his life.

“It’s a fulfillment of the works of the Holy Spirit,” Father Chan said after his ordination.
“Everything depends on God; he will make you pull through everything.”

The five men join 15 other priests ordained since Bishop Taylor came to the Diocese of Little Rock in 2008. The ordination ties the 2010 ceremony for the most priests ordained at one time, stretching back to at least 1960. Bishop Taylor told the men that they were to be co-workers with the laity in God’s vineyard on earth, leading rather than lording over their flock.

“Love manifests itself in many ways. One is by treating people with compassion and not judging their motives. Especially in those upsetting moments when confronted with regrettable circumstances,” Bishop Taylor said. “Love also manifests itself in the way we see and revere Christ in those we serve, especially those high maintenance sheep present in every parish.”

While the congregation and priests laughed with understanding, his message pointed to the humanity, the brokenness in each priest, yet God will give them the grace to continue his mission.

As the bishop and all priests present laid their hands on the heads of the newly ordained in prayer one by one, calling on the Holy Spirit to set him apart as a servant of God, Father Gadberry again experienced God’s grace in his life. The farm boy from Wynne has been studying at the Pontifical North American College in Rome, a transition about as wide as the distance between Arkansas and Europe. But on his ordination, the day was peacefully ordinary.

“In a way, everything today was normal,” said Father Gadberry, who will be the new associate pastor at St. Vincent de Paul Church in Rogers. “The Lord said, ‘Stephen, I’ve been with you this whole time, so I’m not going to leave you.’”

While each were vested with a stole and chasuble, symbols of celebrating the Eucharist and responsibility and authority in service to Christ, few people in the early lives of Fathers McFall and Whittington could have predicted this moment.

McFall served God’s people as a Baptist pastor, even traveling to places like Brazil to convert souls to the faith. As initial curiosity gave way to God’s call in service to the Catholic Church, his wife, Laura and son Samuel became pillars of support for his new religious vocation.

The Vatican has a special provision allowing married men ordained in another Christian faith to enter the seminary for the priesthood after converting to Catholicism. A diocese must receive this special approval from the Vatican and those approved are not required to make a promise of celibacy.

“Both of us together do God’s will for our lives,” his wife said. He will serve as associate pastor for Hispanic ministry at Christ the King in Fort Smith and chaplain at Mercy Hospital. “We never thought it would lead us here … this is his heart, it’s what he wants to do.”

His son added, “I’m really excited; it’s been a long journey for him.”

Whittington grew up with a strong Christian faith, in the shelter of his devoted Pentecostal parents, Richard and Regina. His father, a minister, stood with his wife, watching as their son took another step on his unique path.

“We’re proud of him, we’re glad for his accomplishments,” his father said. “He needs to stay true to himself and serve God.”

Susan Holmes, a close friend of Whittington and his family, accompanied female relatives of the other four priests bringing the gifts up to the altar for consecration. The Holmes’, also converts to Catholicism, have come to know Father Whittington, who will be teaching seminarians as the prefect of the House of Formation in Little Rock, as a holy and wonderful man, said Susan, trying to hold back tears.

“His ministry is a continuation of what his parents have done for Jesus all of these years,” passing faith onto their son, she said.

Though customary for each of the newly ordained to hug their fellow priests and bless their families, their embrace of Msgr. Scott Friend was one of unique affection, a love for him as their father on this journey to the priesthood. Msgr. Friend, director of vocations, likened the journey with each to that of a roller coaster, riding through all the twists and turns with them. Though he has struggled with multiple sclerosis since 2002 and has had some health issues in recent months, it was never a question whether he’d be there.

“I’m grateful to God for them,” he said through tears. “They’re going to be great priests.”

A teary-eyed Msgr. Friend looked up at his priestly children, radiant smiles on their faces, and walked toward them once again to embrace them in celebration of God’s glory.