Deacon said he felt affirmed in his calling from the love, support by parishioners 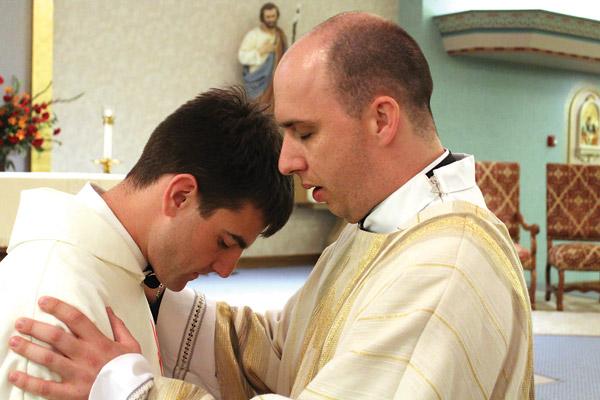 Dwain Hebda
At the conclusion of his Mass of Ordination at St. Joseph Church in Conway June 2, Deacon William Burmester (right) blesses Deacon Mike Johns, who became a transitional deacon May 24 in Jonesboro.

Dwain Hebda
At the conclusion of his Mass of Ordination at St. Joseph Church in Conway June 2, Deacon William Burmester (right) blesses Deacon Mike Johns, who became a transitional deacon May 24 in Jonesboro.

CONWAY — Lying prostrate on the floor of St. Joseph Church in Conway, which had been his home parish since 1996, William Burmester could hear the voices of his family, friends and fellow parishioners swirling around him singing the litany of the saints.

When he arose, the full weight of his ordination to the transitional diaconate settled upon him.

“It was very surreal feeling laying prostrate on the ground and just hearing the voices of the different people around me,” he said. “I really do feel like it’s at that point, when I was lying down and could hear everyone singing the saints intercession for me that I felt it. That, and then right after that having the hands laid on me by the bishop; it really was a special moment. It’s going take a long time to reflect on that.”

Burmester’s June 2 ordination ended a remarkable spring for the Diocese of Little Rock, a span that saw six seminarians ordained to the transitional diaconate, one to the permanent diaconate and five to the priesthood. Yet even having witnessed several of these other rites, Burmester was still not altogether prepared for his moment before Bishop Anthony B. Taylor.

Bishop Taylor concelebrated the Mass with Father Braden Maher of Springfield, Ill., and more than a dozen priests from within and outside the Diocese of Little Rock. Deacon Richard Papini served as the vesting deacon as two full rows of the diocese’s seminarians looked on from the front row.

“I was really nervous before going into it all,” he said. “I just felt so affirmed, especially with the applause from everyone, that it was hard to even hold back the tears from that point. Especially at Communion, seeing the people who have helped me along the way here made me appreciate their affirmation in my life. And it really made me see Christ’s affirmation of the calling in my life.”

That call came early, according to Burmester’s mother Theresa, who recalls getting early glimpses into her second-born son’s future path in life.

“There were a couple of things. One time, and I still have it, he wrote on a piece of paper, ‘When I grow up I want to be a …’ well, actually he put ‘pest’ but he meant ‘priest,’” she said with a laugh. “And then another time I went in his bedroom and he was small, I would say third grade, fourth grade and he was kneeling by his bed saying a rosary. And I was like, maybe there’s something there.”

“I’ve been so excited for this day and we’ve waited a long time for it. I’m blessed with all three of my boys but so blessed that William has chosen to follow his vocation.”

By the time William solidified his childhood aspirations of a life in vocations, his father Richard was way ahead of his son’s announcement. He credited the family’s faithful parish for making William open to the call of Christ and the diocesan vocations office for helping him bring it out.

“I really wasn’t surprised when he looked me in the eye and said he was going to be marrying the Church; that that was his bride,” he said. “The bishop, his fellow priests and his fellow seminarians are so supportive to give him that spiritual guidance. As parents we’re always there for him, but we know there’s an extra layer of spirituality within the Church.

“Moving to St. Joe in ‘96, it just became family. It’s a community of loving people, St. Joe is, and having this ordination here just means the world to us, just like having a wedding in your hometown. It’s just a wonderful event.”

Burmester will spend the summer at Blessed Sacrament Church in Jonesboro before returning to St. Meinrad Seminary in Indiana to complete his priesthood studies.

SEE MORE PHOTOS related to this story at Arkansas Catholic's Zenfolio page, and order prints if you like. You also can browse other photos taken by Arkansas Catholic photographers.
Click for the Deacon ordinations 2016 index