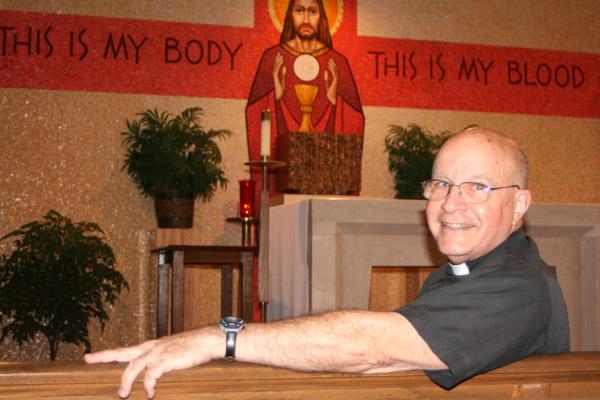 Aprille Hanson
Msgr. Lawrence Frederick, rector of Catholic High School for Boys, has spent many years celebrating Mass in the campus chapel. He marked 50 years in the priesthood May 28.

Aprille Hanson
Msgr. Lawrence Frederick, rector of Catholic High School for Boys, has spent many years celebrating Mass in the campus chapel. He marked 50 years in the priesthood May 28.

Msgr. Lawrence Avon Frederick took a leap of faith 50 years ago, leaving a job as an aeronautical engineer to join the seminary, “just to see,” if God was truly calling him. On his jubilee year, he took another leap — off a 14-story building.

In April, Msgr. Frederick, 79, known to most as “Father Fred,” rapelled down the First Security building in downtown Little Rock to raise money for Catholic High School for Boys, where he’s spent 48 years of his priesthood.

“A lot of people say once they step over a building they’re afraid of falling. I wasn’t. I trusted the harness I was in and the ropes and all that,” he said.

Shooting for the stars

Monsignor’s life and his vocation have been built on a foundation of risks and trust. On May 28, 1966, he was ordained to the priesthood and has taught at both Catholic High School for Boys and 24 years at Mount St. Mary Academy, both in Little Rock.

Growing up one of three boys in North Little Rock, he was known as Avon, a quiet kid, yet rough and tumble, “like any boy,” Msgr. Frederick said.

“We lived near the Rock Island Railroad track, and we used to love to go up when the train was crossing the bridge, which was very dangerous, and we would get up there and see how close we could get to the cars that were moving,” he said.

As an aeronautical engineer working for McDonnell Aircraft (now Boeing), the high school administrator also pushed the limits of his designs for Project Mercury, the first human-controlled spacecraft for NASA. The big question — would it float?

“We took a very basic cast-iron model, large model mock-up and put it in the Mississippi River and the first thing it did was sink right to the bottom,” he said, reassuring they worked out the kinks. “Yes, the astronauts came back all right.”

For those that believe some divine voice of God called Msgr. Frederick to the priesthood, he’s quick to dash their hopes.

“I say forget that, it’s not that way,” he said. “While I was working, the thought came to me that maybe I should be doing something else. But I loved what I was doing and I didn’t want to do something else. But God had other ideas and he kept bugging me.”

He never left science behind though — it’s tethered to his priesthood, explaining that “science gives a rational basis to my faith.”

“They are not the same thing, that’s for sure because science deals with the material and faith does not deal with the material,” Msgr. Frederick said. “But science helps me to understand the concept of belief because in science we have quantum mechanics, probabilities; you have all kinds of dimensions that are involved, virtual and real particles. I have no problem believing in heaven or God at all.”

Throughout the years, he’s taught a range of science, math and religion classes at Catholic High and MSM, understanding the needs of students with learning differences because he is dyslexic himself. If he knew the secret, the silver bullet to get kids interested in science and math, he’d be “a millionaire,” but he tries to keep it fun with experiments and moving around the classroom while lecturing, he said.

“I had a tough time in school, I really did. It wasn’t until much later I found out I had dyslexia, but you know that was before anyone knew anything about it,” he said. “Knowing how much trouble I had learning things I knew what I had to do in the matter of repetition and how I had to stress certain things to help my students.”

It’s always about trusting God in everything. It’s how he gets through all his responsibilities — chaplain for the Carmel of St. Teresa of Jesus in Little Rock, rector and teacher at Catholic High and chaplain and teacher at MSM.

His life could have been different. He could have worked even higher up the ranks as an engineer. But any talk of what he regrets garners a hard, eyes-shut laugh from Monsignor.

“In all things you think what if I had not answered God in this manner, what would I be doing now? But you know, I’m happy doing what I’m doing,” he said. “I made a decision with God’s help and that’s where I am. The only thing I’ve ever wanted to do was rappel down a building and I’ve done that so I’m not doing it anymore.”