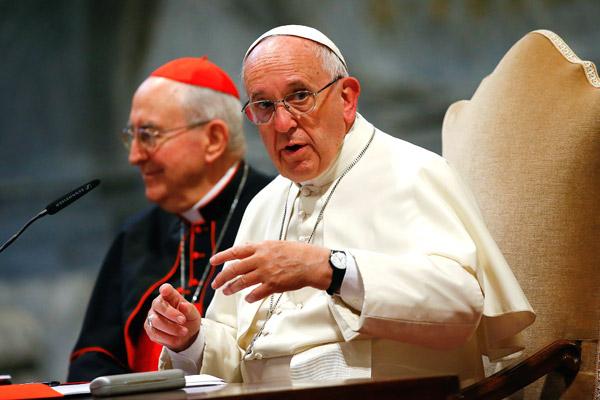 CNS / Tony Gentile, Reuters
Pope Francis speaks during the opening of the Diocese of Rome’s annual pastoral conference at the Basilica of St. John Lateran in Rome June 16.

CNS / Tony Gentile, Reuters
Pope Francis speaks during the opening of the Diocese of Rome’s annual pastoral conference at the Basilica of St. John Lateran in Rome June 16.

ROME — Because most people today do not understand that sacramental marriage really is a bond that binds them to each other for life, many marriages today can be considered invalid, Pope Francis said.

Raising a point he has raised before, and one also raised by now-retired Pope Benedict XVI, Pope Francis insisted June 16 that the validity of a marriage implies that a couple understands that sacramental marriage is a bond that truly binds them to another for their entire lives.

“We are living in a culture of the provisional,” he told participants in the Diocese of Rome’s annual pastoral conference.

Answering questions after giving a prepared talk, Pope Francis told the story of a bishop who said a university graduate came to him saying he wanted to be a priest, but only for 10 years.

The idea of commitments being temporary “occurs everywhere, even in priestly and religious life. The provisional. And for this reason a large majority of sacramental marriages are null. They say ‘yes, for my whole life,’ but they do not know what they are saying because they have a different culture,” he said.

The Vatican press office, publishing a transcript the next day, adjusted the pope’s words to read, “A part of our sacramental marriages are null because they (the spouses) say, ‘Yes, for my whole life,’ but they do not know what they are saying because they have a different culture.”

Jesuit Father Federico Lombardi, Vatican spokesman, said transcripts of the pope’s off-the-cuff remarks always are reviewed for precision and clarity prior to publication. “When dealing with particularly important topics, the revised text always is given to the pope himself. That happened in this case, therefore the published text was approved expressly by the pope.”

Attitudes toward marriage are influenced strongly by social expectations, the pope said, telling the story of a young man who told the pope he and his fiancée had not celebrated their wedding yet because they were looking for a church with decor that would go well with her dress. “These are people’s concerns,” the pope said. “How can we change this? I don’t know.”

Pope Francis told participants that when he was archbishop of Buenos Aires, Argentina, he banned “shotgun weddings” from Catholic parishes because the strong social pressure to marry placed on a couple expecting a baby could mean they were not fully free to pledge themselves to each other for life through the sacrament.

It was important, he said, that the couples were not abandoned, but were assisted by the Church. Many of them, he said, “after two or three years would marry. I would watch them enter the church — dad, mom and the child holding their hands. They knew well what they were doing.”

Meeting in July 2005 with priests in northern Italy, Pope Benedict also raised the question of the validity of marriages that, while performed in church, bound together two baptized Catholics who had little understanding of the faith, the meaning of the sacraments and the indissolubility of marriage.

Asked about Communion for a divorced and civilly remarried person, Pope Benedict had responded, “I would say that a particularly painful situation is that of those who were married in the church, but were not really believers and did so just for tradition, and then finding themselves in a new, nonvalid marriage, convert, find the faith and feel excluded from the sacrament.”

Pope Benedict said that when he was prefect of the Congregation for the Doctrine of the Faith he asked several bishops’ conferences and experts to study the problem, which in effect was “a sacrament celebrated without faith.”

He said he had thought that the Church marriage could be considered invalid because the faith of the couple celebrating the sacrament was lacking. “But from the discussions we had, I understood that the problem was very difficult” and that further study was necessary.

According to the Code of Canon Law, “For matrimonial consent to exist, the contracting parties must be at least not ignorant that marriage is a permanent partnership between a man and a woman ordered to the procreation of offspring by means of some sexual cooperation.”

In a formal speech in 2015 to the Roman Rota, a marriage tribunal, Pope Francis said: “The judge, in pondering the validity of the consent expressed, must take into account the context of values and of faith — their presence or absence — in which the intent to marry was formed. In fact, ignorance of the contents of the faith could lead to what the code (of canon law) calls an error conditioning the will. This eventuality is not to be considered rare as in the past, precisely because worldly thinking often prevails over the magisterium of the Church.”

What do we ask about the sacrament of reconciliation?