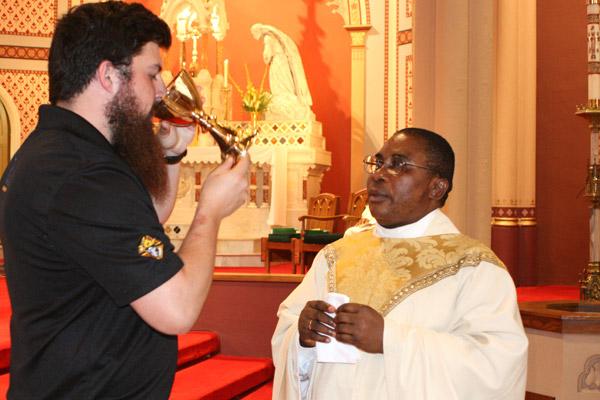 Every day, Father Chris Okeke is opening the doors of St. Peter the Fisherman Church in Mountain Home at 4:45 a.m. It was not a task assigned to him; it’s a part of his daily routine of giving thanks to God — prayer in the church, work in the office, Mass, visiting those in need and more prayer.

Prayer is what has sustained him these past 25 years of priesthood.

“I am very grateful to God because I didn’t know I’d reach” this jubilee, he said. “He must feel I have not finished my work. … I’m very happy that he kept me alive to celebrate my 25 years. My prayer is also (for God) to continue guiding me, not to go back to my normal way of life — add more to it.”

Born in 1954, Father Okeke grew up the second of three sons in Amanze Obowo in the Imo state of Nigeria. He was 5 years old when his father died and eight years later, during the civil war in Nigeria in 1967, his mother died. Eventually, he and his brothers went to an orphanage, raised by the Daughters of Mary Mother of Mercy in Avutu.

“The lesson I got from them is what made me who I am today. Because of their way of life my mind went towards becoming a priest,” Father Okeke said. “It was a promise I made to God — if he would keep us alive during the war, I would be a priest.”

It was more than a promise though; almost divine providence, given the story of his names. His mother had three children, while others did not survive. In hopes that he would live, Father Okeke was named Anabochi, meaning, “If I stay ‘til tomorrow, I will be her child,” he said.

“The name I answered during my baptism was Christopher. Then the bishop said, ‘Do you know what Christopher means? Carrying Christ over the sea.’ That’s why when you look at St. Christopher you see Christ on his shoulder and he will be looking at him,” as the patron saint of travelers, Father Okeke said. “So my bishop connected my first name and my second christened name — ‘If I stay ‘til tomorrow that I would take Christ to people.’”

In 1982, he was accepted to Bigard Memorial Seminary and later studied at the Seminary of Sts. Peter and Paul. He was ordained on Aug. 3, 1991, for the Umuahia Diocese.

“I was a pastor for 14 years before coming here, in my country, I worked in several parishes,” including being the first pastor for his hometown church, Father Okeke said. “I do miss my people, I miss my country. I love them, they love me just like the U.S. people love me. That’s why by the grace of God I’ll be visiting them in December,” after three years.

He came to the United States in 2005 and served at parishes in Jonesboro, Lake Village, Hot Springs and Fort Smith until becoming associate pastor at St. Peter the Fisherman Church in Mountain Home in 2011. He became a U.S. citizen last year.

Father Okeke said there’s not much that’s been difficult in his priesthood that he hasn’t been able to overcome with God’s grace, including learning Latin to celebrate the Latin Mass at St. Peter’s.

“I tell people if they are in difficulty of anything, just ask God and he will give you what we call supernatural grace,” he said. “You will be able to carry on with your assignment and that’s what helped me.”

Not trying to boast, Father Okeke said others have told him he’s a happy person. Pointing to Ecclesiastes 3, he said when others have problems he feels the burden, their tears. If they’re laughing, he is laughing, explaining, “There’s a time for everything.”

“The day I was ordained a priest, I was lying down, people were rejoicing, what I was thinking about is how I am going to carry on with this assignment?” Father Okeke said. “Whatever I am doing in this priesthood I try to make sure I did my best. Though my best might not be the best, at least I’ve tried to satisfy myself and satisfy the people.”