Pastor in Pocahontas called to priesthood as a child in Nigeria 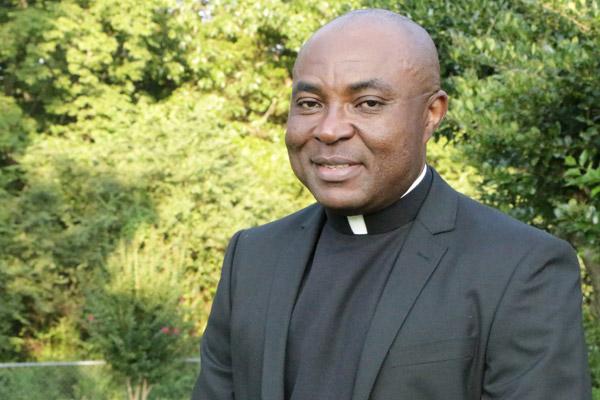 Sarah Morris
Father Athanasius Okeiyi, pastor of St. Paul the Apostle Church in Pocahontas, celebrated his 25th jubilee as a priest July 13. He came to the United States from his native Nigeria in 2007.

Sarah Morris
Father Athanasius Okeiyi, pastor of St. Paul the Apostle Church in Pocahontas, celebrated his 25th jubilee as a priest July 13. He came to the United States from his native Nigeria in 2007.

POCAHONTAS — It was in fifth grade that Father Athanasius Okeiyi realized he enjoyed taking an active role in his parish.

It continues to be a passion today. Father Okeiyi, who cele­brated his 25th year as a priest July 13, is pastor of St. Paul the Apostle Church in Pocahontas, St. John the Baptist Church in Engelberg and St. Joseph Church in Corning.

“I grew up from a Catholic background and my father made sure all of us went to church,” Okeiyi, 51, a Nigerian native, said. “I began by serving at Mass. I was an altar server, then I was in the junior choir at age 8 or 9. I was also a lector. We had senior and junior lectors so I was serving at the children’s Mass then.”

The work led to church members telling him they appreciated his work; that he would make a “nice priest.”

Upon reflection, Father Okeiyi said he realized he was interested in the priesthood. He told his parish priest and then his parents, who were all supportive.

“After my primary school, I went to minor seminary,” said Father Okeiyi, who was then age 11. He is the second-oldest of 10 children. “In Nigeria, we have minor and senior seminary school. The minor is seventh grade to 12th grade.”

Minor seminary provides students a chance to figure out if the vocation is for them. There were more than 200 seminarians in Father Okeiyi’s seventh-grade class. Of those, he said 12 became priests.

“It made me really know what it really means to be a priest,” he said. “They teach you how to conduct yourself as a priest, you see priests and you interact with them. … Six years of minor seminary training made it possible for me to be able to discern.”

Father Okeiyi described senior seminary as “advanced training.” He was ordained at age 26 and first served as an associate pastor at St. Finbarr Church in Nigeria.

“My bishop called and told me the bishop of Little Rock needed the help of priests from my diocese and he asked me if I would like to go,” Father Okeiyi recalled. “When the bishop asks you such a question, you might not be comfortable saying no so I told him yes.”

However, there were mixed feelings — he said he was happy to go celebrate the ministry, meet new people and learn a new culture, but he was also sad to leave his family behind.

His first assignment as an Arkansas pastor was at St. John the Baptist Church in Brinkley, St. Francis of Assisi Church in Forrest City and St. Mary of the Lake Church in Horseshoe Lake. In 2010, he was reassigned to Pocahontas, Engelberg and Corning parishes.

“Sometimes when you talk to people and they appreciate what you do and the things you do touch their life, it makes you feel this is what you were really called to do,” Father Okeiyi said. “I like visiting the sick. Each time I go to the hospital or nursing home, the joy I see on their faces makes me feel happy and I want to see it over and over again.

“I just feel I am called to give people joy, spiritually and otherwise,” he added.

As his 25th anniversary approached, Father Okeiyi said it is a joyous time as well as a moment to reflect.

“First of all, I am excited and thankful to God for making it possible to witness this time. It is a big celebration,” he said. “On another note, sometimes I ask myself, ‘Have I really been what I should be?’ and I have a self-examination. It is a moment of reflection for me.”