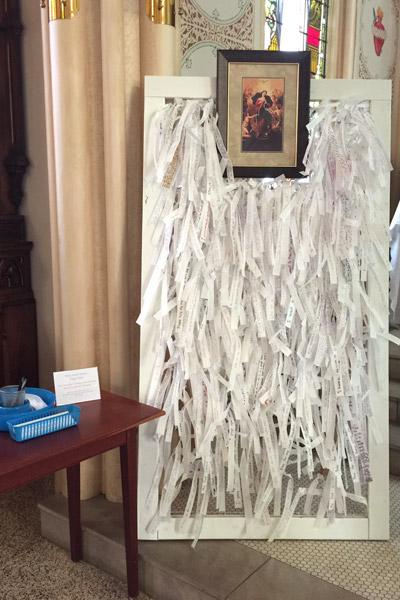 Parishioners have attached prayer requests to a wooden panel at St. Edward Church in Little Rock as a devotion to Mary, Undoer of Knots. Other parishes can buy a similar display.

Parishioners have attached prayer requests to a wooden panel at St. Edward Church in Little Rock as a devotion to Mary, Undoer of Knots. Other parishes can buy a similar display.

When Pope Francis visited the United States in September, he made an unexpected stop at a special grotto in Philadelphia, filled with prayer requests for Mary, Undoer of Knots. As the pope, who has a special devotion to Mary as the one who unties knots in our lives, prayed over the prayer requests, Nita Danaher, a parishioner at St. Edward Church in Little Rock, witnessed it all.

Since then, it’s been on her heart to bring a similar devotion to Arkansas during the Year of Mercy. Danaher posed the idea of a knots project to fellow members of the Christian Mother’s Solidarity group at St. Edward, a group of mothers in various parishes who pray for “anything and everything” and help out at church events.

“I have never seen anybody so enthused with doing a project,” said LeAnn Wellinghoff, president of the Christian Mother’s Solidarity group. “It’s one of these things we felt like we wanted to do.”

The group had wooden panels built and created strips of paper so parishioners or visitors can write their prayers down and attach them to the panel. Once a prayer request is received, the Mother’s Solidarity Group “prays for all the prayers on there daily.”

The devotion stems from a 1700 painting called “Wallfahrtsbild” by Johann Georg Melchior Schmidtner that depicts the Virgin Mary untying a rope of knots and is displayed at St. Peter am Perlach in Augsburg, Bavaria, Germany. According to a 2015 Catholic Herald article, catholicherald.co.uk, Pope Francis spread the devotion after seeing the painting in his younger years.

Though Danaher saw what the prayer devotion could look like for the first time in Philadelphia through Project HOME, a group that serves the local homeless and built the grotto, she learned of Mary, Undoer of Knots from fellow Mother of Solidarity member Martha Roberts, who gave her a novena book. Roberts died in March.

“Martha was the one who put me on this path by giving me that novena book to Mary, Undoer of Knots,” so the project is also being done in her memory, Danaher said. “Now is the time to do it.”

A white wooden panel, standing at 6 feet high and 3 feet wide, is displayed in St. Edward Church near an altar of Mary. English and Spanish instructions along with slips of paper, the same ones used by Project HOME, are available.

Before summer break, St. Edward School students wrote out their prayers for sick grandparents, someone they know in jail and everything in between.

“It made you realize the things that they carry inside of them too,” Danaher said.

Around the first week in June, pastor Father Greg Luyet also gave “a homily on the knots of our life and he tied it all together really well.”

Since then, about 600 to 800 prayer requests have been submitted and another panel will soon be put up. But it’s not enough — the Christian Mother’s Sodality wants the entire diocese involved. Parishes can buy a wooden panel and paper strips from St. Edward for $40. Some parishes have already signed on, including St. Joseph Church in Conway, which will have it displayed at its annual bazaar in early August. Our Lady of the Holy Souls Church also hopes to display one, with parishioner Shannon Callahan already bringing slips of paper to Jericho Way, a homeless day center in Little Rock operated by Catholic nonprofit Depaul USA, where she helps lead Bible study. About 70 prayers were also brought back from a Honduras mission trip with Christ the King Church in Little Rock.

“I want to reach out not only to the parishes, but compassion centers, other places,” including schools, Danaher said. “These people are struggling and I think we just have to pray for them.”

On Nov. 20, the last Mass during the Jubilee Year of Mercy, Danaher hopes that all parishes with panels can bring them to the Cathedral of St. Andrew for Bishop Anthony B. Taylor to bless.

“I would love for those to be displayed, weather permitting, in front,” of the Cathedral, Danaher said. “We can hinge them together, almost like a wall there of all these prayers.”

After the Year of Mercy ends, the group has not decided what to do with the prayers, but Danaher said Project HOME used white ribbons, because they are flame retardant, as insulation in a Habitat for Humanity home.

“It’s something we can check into,” she said, or allowing individuals to take a prayer home and continue to pray over it. Even still, others have asked, “Why do we have to end this project at the end of the year?”

“It would just be so awesome at that last Mass to see parishes from all over the state come and be a part of it,” Danaher said. “ … The power of prayer is amazing.”

To request a panel and paper strips or send a prayer request to be included on the panel at St. Edward, e-mail .

Accident turned life upside down, but faith helped him