Father Do fled Vietnam, but created ministry in Arkansas

Bishop Andrew J. McDonald invited Father Do, then a refugee, to be a diocesan priest 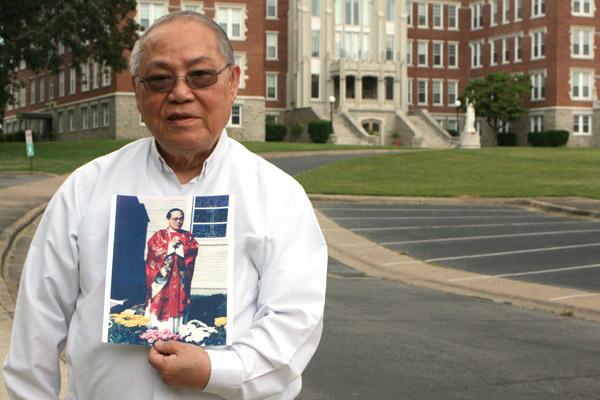 Aprille Hanson
Father Nho Duy “Dominic” Do, who celebrated his 50th jubilee this year, holds a photo of himself as a young priest. He retired in 2011 and lives at St. John Manor in Little Rock.

Aprille Hanson
Father Nho Duy “Dominic” Do, who celebrated his 50th jubilee this year, holds a photo of himself as a young priest. He retired in 2011 and lives at St. John Manor in Little Rock.

Father Nho Duy “Dominic” Do has always been a man in motion. Whether it was leaving his home in Vietnam as a child to pursue religious life or driving throughout Arkansas ministering to the various Vietnamese communities, Father Do made his service to God a traveling ministry.

April 29 marked his 50th jubilee as a priest, a path he was set on after being an altar server and being dedicated to Catholicism. His pastor suggested he attend minor seminary in fifth grade, Father Do, 78, said.

“My boyhood was in North Vietnam. 12 years old I was in minor seminary,” he said. “At 16 years, the priesthood … At Vietnam we follow very early for vocation.”

In 1954, Father Do left his parents and siblings to study for the priesthood in South Vietnam. With the split between North and South Vietnam, it would be the last time he’d ever see his parents.

“The communists take North Vietnam; after 1954 I cannot contact my family,” Father Do said.

He returned to Vietnam in 1996 to visit his brother and sister, but his parents had since died.

He received his bachelor’s degree in philosophy and theology. Father Do was ordained in 1966, in Saigon, or Ho Chi Min City, and served as an associate pastor at Immaculate Conception Parish and as the school’s principal.

His biggest move yet would be in April 1975 boarding a fishing boat as a refugee when dangers heightened during the war between North and South Vietnam.

“A big boat took people,” Father Do said, adding he was on the boat for about a week. “…  Because of the very big crowd, I could not come down, I sit on the top and it was raining.”

He stayed in Guam three months before a brief stay in California. He was transferred to Fort Chaffee in Fort Smith where many Vietnamese refugees were staying and met Bishop Andrew J. McDonald.

“Bishop McDonald visited a second time to Fort Chaffee, I remember 1975, Bishop McDonald came for confirmation for 650,” Vietnamese Catholics and then asked Father Do to serve in the Diocese of Little Rock. Father Do said he celebrated the first Vietnamese Mass before Christmas at Our Lady of the Holy Souls Church in Little Rock.

Father Do soon found a home at St. Barbara Church in DeQueen along with other Vietnamese refugees. He then moved to St. Patrick Parish in North Little Rock in 1979. The majority of his priesthood was spent traveling monthly throughout the state to Vietnamese communities, including those in Blytheville, Fort Smith, Jonesboro, Rogers, Mountain Home, Pocahontas, West Memphis, Pine Bluff, Little Rock, Hot Springs, Mena, Waldron, Mount Ida, Texarkana and Nashville. In 1982, he became a United States citizen.

“I go everywhere,” Father Do laughed. “… I have a scheduled visit, I come and say Mass and they come.”

Diocese of Little Rock seminarian Tuyen Do, 37, a native of Vietnam, first met Father Do through his nephew in Canada. He urged him to come to Arkansas to continue his studies toward the priesthood.

“My English is not real strong yet, but I can serve God with all my heart … I can be a witness of the love of God like Father Dominic can do,” he said.

He said Father Do helped Vietnamese immigrants “connect with their diocese. He also gave them a lot of pastoral care. It was the first time to have a Vietnamese priest in the state and in this diocese.

“We have a lot of trouble with the language and the culture — that is the big thing we have to fight with, and Father Dominic helped a lot with that,” Tuyen Do added.

On June 30, 2011, Father Do retired to St. John Manor in Little Rock. His most recent excitement was seeing his nephew, Father Dominic Trinh Do, follow in his footsteps for the Diocese of Nelson in British Columbia.

“He was ordained to priesthood June 29,” Father Do said. “I go to Canada,” staying with Archbishop J. Peter Sartain — who was formerly bishop of Little Rock — in Seattle on the way, he said.

Though his retirement has been more restful than his fulltime ministry, he said he has enjoyed 41 years serving in Arkansas.