A Catholic you want to know: Patrick Sweeney 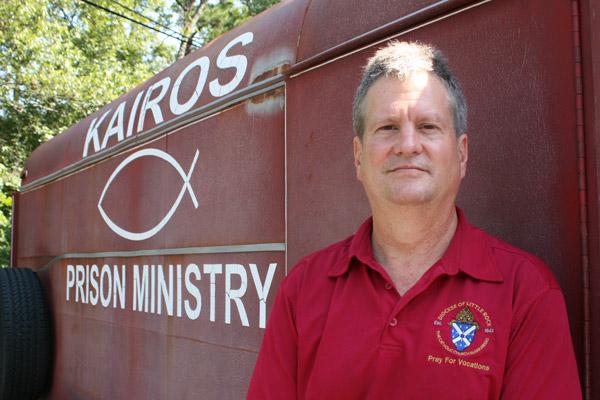 Aprille Hanson
Patrick Sweeney, the facilities manager for St. John Center in Little Rock, has volunteered with Kairos Prison Ministry for 21 years. He visits once a month with inmates in Jefferson County west of Pine Bluff.

Aprille Hanson
Patrick Sweeney, the facilities manager for St. John Center in Little Rock, has volunteered with Kairos Prison Ministry for 21 years. He visits once a month with inmates in Jefferson County west of Pine Bluff.

Why you want to know Patrick Joseph Sweeney: Patrick Sweeney has been volunteering 21 years with Kairos Prison Ministry, an international ecumenical ministry that addresses the spiritual needs of the incarcerated and their families. Sweeney spends four to five hours at a time visiting with inmates at the Randall L. Williams Correctional Facility in Jefferson County once a month. According to kairosprisonmin istry.org, recidivism rates have lowered in certain areas thanks to the ministry. Sweeney said he’s seen several people transformed through Christ’s love who have built faith-filled, positive lives for themselves after prison. For six years, he has also worked as the facilities manager at St. John Center in Little Rock.

In the Church teachings with this being a Year of Mercy, we are to visit the sick, visit the imprisoned, feed and clothe the hungry — just the corporal works of mercy.

Why did you get involved in prison ministry?

I got into it because of Cursillo. I was looking for action, something to get involved. My father was active in (Kairos) and he asked me to attend a weekend, and I went kicking and screaming and after I made the retreat and I saw the Holy Spirit work in three days turning these hard men’s hearts just into butter … Just watching these men continue to grow in their faith gave me the desire to grow, and I think I’ve learned more from them than they’ve learned from me.

What is a misconception people have about those in prison?

A jailhouse religion; they find Jesus to get out or use that they’ve been changed. Only God can change you in that demeanor. … What we don’t understand a lot of us is … we’ve had good parents, good friends. We made good choices because we had good people around us. Some people have not had that opportunity. Probably 80 percent of those in prison are a product of environments that are not supporting.

Tell me about a time someone who was incarcerated really touched your heart?

The one that really touched my heart (was) a gentleman who became a leader (in Kairos). I learned from him, through all his struggles in life. When he walked into the Kairos with his tattoos, he looked like a mean guy, just somebody that just said “stay away.” He built walls around himself. He found his faith and he became so strong in his faith. He drew me to my faith. He said you don’t realize what you have in your church, in your faith.

Is there a Bible verse that you’ve leaned on during struggles in your own life?

Matthew 24:6-13; Basically you watch the news and it will scare you to death. You just have to keep focused on the cross. It’s basically what Matthew’s telling us — we should be concerned with what we’re doing and be in the world but not of it.

What do you enjoy about working at the diocese?

The peace among all the employees; no competition. Everyone is here because they want to serve. … I look forward to going in every morning even though it might be a lot going on and you might be out there in that sun, I just love to do it. Even when you come in and lightning has hit a building and you have no lights and you’re trying to figure it out. I think I love chaos.

What are some of your hobbies?

Kairos I think is my hobby, and my kids. I’m a workaholic I don’t have much of a life anymore. I used to always travel and thought I had to do this and that. I play guitar, but I haven’t mastered it, but I haven’t given up on it. I like to go fishing and travel, but I like to work.

Priest brings witness of faith to inmates throughout state