Board of lay people, clergy reviews all allegations of abuse for diocese 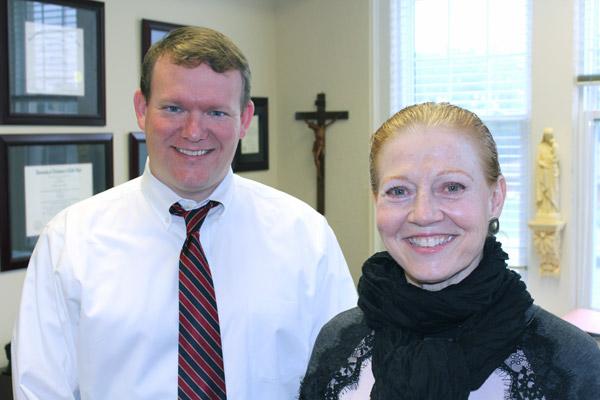 Susan David took over as safe environment coordinator for the Diocese of Little Rock Aug. 22. David, who grew up in Hot Springs, holds a bachelor’s degree in sociology from Henderson State University and has completed coursework toward a master’s degree.

In her role, David is responsible for the Virtus training program and vetting visiting priests and deacons prior to their arrival in the diocese.

“This department is very accessible to all, and we’re all available to assist those who need our help in making the environment safe and protecting all of God’s children,” she said.

She is a member of the Cathedral of St. Andrew where she serves as the RCIA coordinator and ministry coordinator.

When the movie “Spotlight” won the Best Picture Oscar earlier this year, some Catholics may have rolled their eyes given the movie’s true-story subject matter. Based on the Boston Globe’s uncovering of the priest sex scandal there and the archdiocese’s attempts to cover it up, it seemed to the uninitiated another case of Hollywood rewarding films that kicked around the Universal Church.

Bishop Anthony B. Taylor was not one of those people.

“I saw the movie, and I thought it was well done,” he said. “It wasn’t about something in the Church that we can be especially proud of, but I thought it represented what happened and how the reporters did their jobs in a way that didn’t overly-sensationalize things.”

Bishop Taylor’s assessment of the film was shared by the U.S. Conference of Catholic Bishops, and sums up the attitude he’s brought to the Diocese of Little Rock. In his eight years in Arkansas, Bishop Taylor has made proper conduct between the clergy and the Catholic faithful a top priority.

“One of the most important obligations I have here in the diocese is to ensure the relationship between our clergy and our faithful is appropriate in every way,” Bishop Taylor said. “It’s not a particularly enjoyable part of the role of bishop, but it’s absolutely necessary for people to feel connected to the Church and know that their children are safe.”

The diocese provides a number of avenues for people to bring incidents or behaviors to light and when those reports are received, a series of formal investigative steps is initiated. Upon receipt of a letter or call about a parish priest, deacon, teacher or other diocesan employee, which can be submitted anonymously, Deacon Matt Glover, chancellor for canonical affairs, swings into action.

“I think many people assume that when someone contacts the diocese with a matter such as this that it’s just the bishop and a couple of his fellow priests sitting around in a closed meeting deciding what to do with it,” Glover said. “While Bishop Taylor has the final say on some matters, there’s a lot more that goes into it.”

Besides the moral obligation to address legitimate wrongdoing, Glover said he and other Church employees are all mandatory reporters, which means they have a legal obligation to inform authorities when they have reasonable cause to suspect child maltreatment or child sexual abuse. That doesn’t make the process of investigating a claim any easier, however.

“People who want to remain anonymous generally don’t provide a means for us to follow-up to get more facts as we investigate,” Glover said. “It can be a challenge putting things together.”

Glover said one indication of the integrity of the process is the manner in which he is left to do his work.

“Bishop Taylor has never told me I had a certain timeline to get a case wrapped up or interfered with an investigation in any way,” he said. “I’ve never felt pressured to come to any conclusion except where the facts led me.”

Another part of the process of which many people are unaware is the work of a special advisory committee called the Review Board whose purpose is to evaluate allegations of clergy sexual misconduct with minors and make recommendations accordingly.Comprised of clergy and lay people, the committee brings a range of backgrounds and experiences to the process from legal work to counseling and other fields.

The committee meets at least quarterly to make recommendations on pending investigations or to weigh in on diocesan policies related to safe environment and may be convened by the bishop as a situation warrants. Nelson, a member of Our Lady of the Holy Souls Church in Little Rock, said her first meeting was not what she expected.

“The first time I attended a meeting, I had never met the bishop. I was very nervous and I thought it might be intimidating,” she said. “Meeting him, he was so easy to interact with that it was the furthest thing from what I thought. We have a very easy-going flow to our discussions. What I noticed is everyone listens to other people, especially Bishop Taylor. He really takes it seriously to listen to our recommendations.”

The makeup of the advisory committee also strives for diversity to provide a range of viewpoints and perspectives. Nelson said in addition to “coming from a place of empathy” for victims of abuse, she believes her Hispanic heritage helps her understand the cultural differences that often prohibit people from coming forward.

“If something uncomfortable happens, the general (Hispanic) population doesn’t like to talk about it,” she said. “Hispanics tend to very much idolize their priest and are very respectful and so it might be harder culturally to speak up.”

She also said she’s come to realize that the committee exists not just to bring inappropriate actions to light and hold people accountable, but to protect the rights of those falsely accused.

“When something comes in front of us, we have to listen to all known facts and details,” she said. “Just because something is said or interpreted one way doesn’t mean that’s necessarily the case.”

The process is working — the diocese hasn’t had a substantiated allegation of clergy sexual abuse of a minor under Bishop Taylor’s watch — but as he himself is quick to point out, past performance in no way guarantees the future without vigilance and consistent effort.

“What I want the people of the diocese to know is anyone who has in any way been a victim of improper behavior by a priest, deacon or member of Church personnel, we are here for you,” Bishop Taylor said.

Susan David took over as safe environment coordinator for the Diocese of Little Rock Aug. 22. David, who grew up in Hot Springs, holds a bachelor’s degree in sociology from Henderson State University and has completed coursework toward a master’s degree.

In her role, David is responsible for the Virtus training program and vetting visiting priests and deacons prior to their arrival in the diocese.

“This department is very accessible to all, and we’re all available to assist those who need our help in making the environment safe and protecting all of God’s children,” she said.

She is a member of the Cathedral of St. Andrew where she serves as the RCIA coordinator and ministry coordinator.

Souls suffer after abuse by clergy, but healing is possible