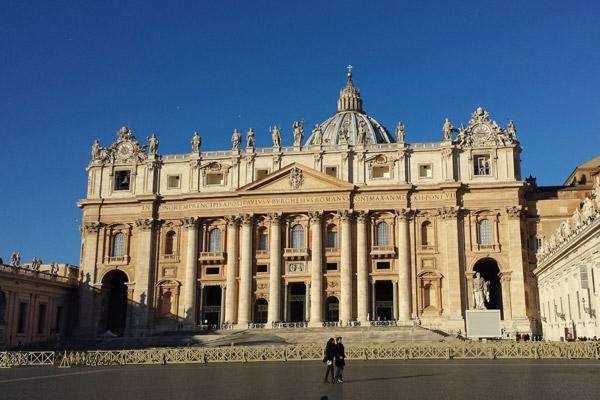 Ralf Kronenberger / Pixabay
One of the stops for the 2017 Arkansas Catholic pilgrimage will be St. Peter Basilica, believed to be built on the burial site of St. Peter. While at the Vatican, pilgrims will also tour the Sistine Chapel and the Vatican Museums.

Ralf Kronenberger / Pixabay
One of the stops for the 2017 Arkansas Catholic pilgrimage will be St. Peter Basilica, believed to be built on the burial site of St. Peter. While at the Vatican, pilgrims will also tour the Sistine Chapel and the Vatican Museums.

Pilgrims will spend two nights in Assisi, visiting the chapel where St. Francis consecrated St. Clare, and six nights in Rome, celebrating All Saints Day and All Souls Day in the Eternal City. The group will also visit Orvieto, site of a Eucharistic miracle; Cascia, home of St. Rita; and Subiaco, birthplace of western monasticism.

Father Pohlmeier will celebrate Mass each day for the pilgrims at various churches in Assisi and Rome.

An informational meeting with Father Pohlmeier and tour organizers will be held from 2-3:30 p.m., Sunday. Nov. 6 in Fitzgerald Hall at St. John Center in Little Rock. To reserve a seat for the meeting, visit http://pilgrimmeeting.eventbrite.com.

Pilgrims will leave Little Rock Friday, Oct. 27 and arrive in Rome Saturday, Oct. 28. Tour guides will take the group directly to Orvieto, where a Eucharistic miracle occurred in 1263, and then to Assisi to the famous Porziuncola, birthplace of the Franciscan order and the chapel where St. Francis consecrated St. Clare. While in Assisi pilgrims will also visit the Basilica of St. Francis, the Church of St. Clare and Cathedral of St. Rufinus.

On Oct. 30 pilgrims will arrive in Rome and stay at the Guest House of Santa Maria alle Fornaci, only a half-mile from St. Peter Basilica. While in Rome, stops will include the Vatican Museum, St. Mary Major and St. John Lateran basilicas, Basilica of the Holy Cross, St. Peter Basilica, Basilica of St. Paul Outside the Walls, Tre Fontane Abbey and the Catacombs.

The regular weekly papal audience with Pope Francis will be arranged, depending on the pope’s schedule. The tour will leave Rome for a short visit to Subiaco, where St. Benedict lived as a hermit before he organized his first monastic community, and Castel Gandolfo, the traditional papal summer residence and gardens.

Stories about saints such as Sts. Rita, Benedict, Scholastica, Francis, Clare, Peter, Paul and Agnes will be shared throughout the travels around Italy.

A tour of “ancient Rome” will include the Coliseum, the Forum, Arch of Constantine, Circus Maximus, Palazzo Venezia, Capitoline Hill, the Pantheon, Spanish Steps, Baths of Caracalla, Arch of Drusus and the Chapel of Domine Quo Vadis. Father Pohlmeier also will lead an afternoon retreat in Rome at the Abbey of Tre Fontane.

The pilgrimage is $3,654 a person, double occupancy, which includes airfare, lodging, breakfast, most dinners and entrance fees to sites. Lunches, drinks, insurance and tips are not included. An additional $425 is required for those requiring single occupancy rooms.

Other information is available on Arkansas Catholic's pilgrimage page.