St. John Center campus founded in 1916 as a college

The campus has housed a seminary, Catholic college and now diocesan employees 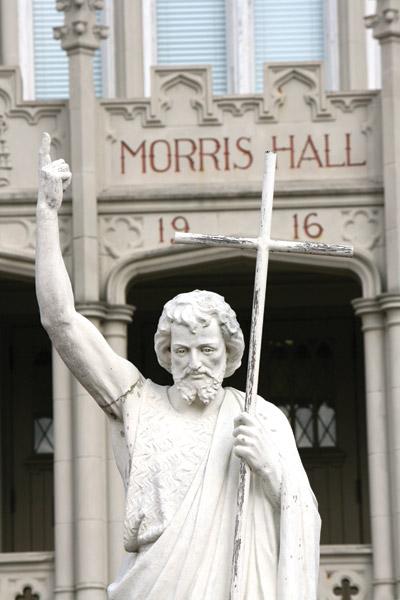 Malea Hargett
A statue of St. John the Baptist stands watch over the Little Rock campus named for him.

Malea Hargett
A statue of St. John the Baptist stands watch over the Little Rock campus named for him.

The diocese’s first five bishops are permanently remembered on the grounds of St. John Center, but the buildings have lived many lives.

1968: The chancery building is added, later renamed The McDonald Center.

2010: The McDonald Center is renovated for Catholic Charities’ offices.

The state’s only Catholic college operated for only 23 years, from 1908 to 1930. The diocese owned the state charter to operate Little Rock College. In 1957 the state asked the diocese for the use of the name and it was granted. Little Rock Junior College was named renamed Little Rock University and operated as a private college. It is now known as the University of Arkansas at Little Rock.

On any given day, the Diocese of Little Rock’s St. John Center campus is alive with activity — employees working to promote the Church in Arkansas, visitors touring the grounds, nearby residents walking their dogs or those in need reaching out to ministries.

But 100 years ago the location, nestled within Pulaski Heights off of North Tyler Street about seven miles from downtown Little Rock, was 40 acres of woods.

“I’ve always thought it was a very beautiful campus because of all the green space and how the gothic features were incorporated into the buildings,” said retired priest Msgr. Richard Oswald, who first attended seminary classes in 1957 at the campus. “A lot of universities would call it a quad, but in our case it’s an oval. And the beautiful gate; it’s just an impressive place.”

“There are very, very few dioceses that have anything like this. They might have an office building; maybe they have an office building and a retreat center if they’re really lucky,” said Greg Wolfe, diocesan finance director. “To have a former college campus available not just for the diocesan offices but for the people to use, I mean, I always say it’s a gift from another generation.”

In 1908, Little Rock College, located downtown at 25th (Roosevelt) and State streets in the former Arkansas Military Academy building, opened as the state’s only Catholic college. In the fall of 1911, the Seminary of St. John the Baptist was also opened at the same location as the college, teaching 10 seminarians, according to diocesan officials.

People of all denominations flocked to the school, with about half the students non-Catholic at one point, according to a history of the diocese published in 1925.

To accommodate growth, Bishop John B. Morris, who founded the college, bought the property described as “complete wilderness of pine, hickory and oak” and the ground a granite “shelf,” according to a 2000 Arkansas Catholic article.

A 1925 article in The Guardian, now Arkansas Catholic, described the terrain, which included a ravine with two large springs, and the work to make sure the campus was ready for fall classes.

“At one time there were 150 men at work, and the entire spectacle was that of a gigantic bee hive,” the article stated. “The science building, Fitzgerald Hall, and Byrne Hall, the service building, were completed, the ravine was filled with ground taken from the top of the two adjacent elevations — all in time for the fall session of 1916.”

The original three buildings still bear the names of the first diocesan bishops and their coats of arms engraved in stone — Andrew Byrne, Edward Fitzgerald and John Morris.

The front gate, buildings and campus were designed by Little Rock resident and civil engineer, architect and pioneer landscape architect Frank M. Blaisdell, who also designed many parks and gardens in Arkansas and throughout the country, including Ravinia Park in Chicago, Riverton Park in Portland, Maine, and the grounds of the Arkansas State Capitol, according to diocesan officials.

By the time classes started in September 1916, only two buildings were ready to instruct or house students and seminarians — Fitzgerald Hall and Byrne Hall. Fitzgerald Hall, which today is used for meetings and retreats as well as a home for retired priests, was used mostly for science instruction, with 25 classrooms, laboratories, a bookstore and drawing rooms, along with dormitories and a chapel on the fourth floor, according to according to the 1993 book “Mission and Memory: A History of the Catholic Church in Arkansas,” by James M. Woods.

Msgr. Oswald said his father Oliver J. Oswald graduated as a pharmacist from Little Rock College in the late 1920s.

“About all the guys who graduated there wound up being pharmacists in Little Rock,” Msgr. Oswald said. “He was very pleased with the education he got there. He had a good respect for the faculty.”

While much has been changed within, academic symbols representing medicine, engineering, architecture, art and music still surround the main entrance door. After moving to its new location, the college added more degrees and programs. The school even boasted of Eagles football and basketball teams.

“It’s very nostalgic,” said Father Thomas Keller, who was ordained in 1958. He is retired and currently lives in Fitzgerald Hall, where he once took classes and lived as a seminarian. “We talk about the old memories here because all of us went to the old seminary here.”

At the time, the campus had only the three buildings. When Father Keller was a student, he said the seminarians enjoyed playing baseball in a large field, which was later sold, and swimming in the creek.

“The creek starts right in our backyard here and goes down and when I was here we built a dam down there out of the rocks,” said Father Keller, adding that one of the men “lost a finger” building it. “We swam in it a few times. Then there came a big storm and all the dirt from everybody’s yards … all washed down into our pool and filled it up. That was the end of our swimming down there.”

While many locals around St. John Center take advantage of the beautiful walk around the oval today, in the 1950s there were still lingering doubts about the Catholic Church.

“No, no they wouldn’t touch the diocese. They thought we’d gobble them up or something,” Father Keller laughed. “They were scared to death of us, thought we were evil or something.”

In Byrne Hall, currently leased to the Arkansas Symphony Orchestra and the diocesan housing ministry Christopher Homes of Arkansas, was a dining hall where the Benedictine sisters of Holy Angels Convent in Jonesboro would prepare meals for students. What has always made Byrne Hall stand out are the stone gargoyles perched on the outside, put there to ward off evil.

“That second floor area where they’re located was the chapel for the sisters who lived up there,” Wolfe said. During that era, there were a few reasons gargoyles were included on churches or sacred spaces, including “to indicate that inside the walls was sacred holy space where devils couldn’t get in, so they’re outside the building … if you come in here you’re safe from that,” Wolfe said.

Morris Hall, which served as the main administration building and dormitories for upperclassman, was finished late in 1916 because of a delay in building materials.

In 1917, the United States entered World War I. Woods stated in his book that 132 students and alumni served in the war and by 1919, a reserve officer’s training corps (ROTC) was set up on campus, which lasted 11 years. The seven-foot statue of St. John the Baptist was erected in the front of the building in 1943.

Today, Morris Hall still serves as the central administrative building and focal point of the campus, housing most diocesan offices, including the chancery, Catholic Schools Office, the Family Life Office and Arkansas Catholic. It still bears the crest of Little Rock College at the entrance.

Wolfe said the name of Morris Hall is important because it honors Bishop Morris who was “the great builder” for the diocese. It has also become the building with the main chapel and the Office of the Bishop.

Around 1920 a gymnasium was built. The seminarians also used the space for Mass until 1951 when Morris Hall Chapel was built, according to diocesan history and Arkansas Catholic archives. In later years, it was used as a parish day care and then converted into a kitchen and dining hall.

In 1962 a $1.5 million building campaign was announced to add two new dormitories, a gymnasium and convent. One of the dormitories, Fletcher Hall, was finished in 1965, but none of the other buildings were constructed. The seminary closed in 1967 when enrollment dwindled, after educating more than 500 priests in 50 years, mostly for other mission dioceses. Fletcher Hall is used today for retreat lodging.

The only building added to the campus since the seminary closed was The McDonald Center in 1968, which now houses Catholic Charities of Arkansas. It was designed by Little Rock architect Leo J. Hiegel. Today, the campus is used not only for diocesan offices and the priest retirement living, but there are groups that come for retreats, education or meetings 48 weekends out of the year, Wolfe said.

Though the campus has changed with the times, the buildings are a constant reminder of the diocese’s roots and continued mission.

“I still think in many ways it could still be called the heart of the diocese,” Msgr. Oswald said. “… A lot of ministry radiates out from that place to the whole diocese.”

The diocese’s first five bishops are permanently remembered on the grounds of St. John Center, but the buildings have lived many lives.

1968: The chancery building is added, later renamed The McDonald Center.

2010: The McDonald Center is renovated for Catholic Charities’ offices.

The state’s only Catholic college operated for only 23 years, from 1908 to 1930. The diocese owned the state charter to operate Little Rock College. In 1957 the state asked the diocese for the use of the name and it was granted. Little Rock Junior College was named renamed Little Rock University and operated as a private college. It is now known as the University of Arkansas at Little Rock.