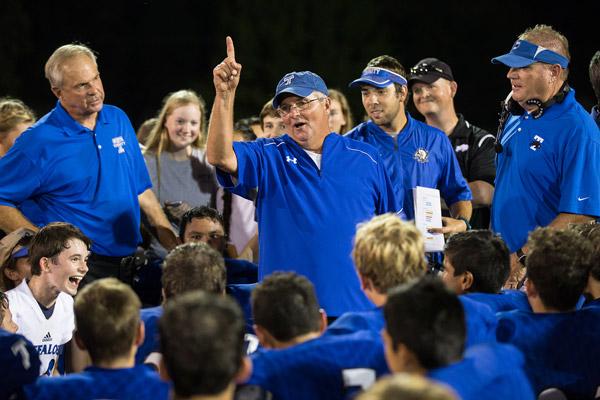 Karen Schwartz
Trinity Junior High football coach John Vitale (center) congratulates his team on their first win of the season. This is Coach Vitale’s first year leading the Buffaloes and his 40th on the sidelines.

Karen Schwartz
Trinity Junior High football coach John Vitale (center) congratulates his team on their first win of the season. This is Coach Vitale’s first year leading the Buffaloes and his 40th on the sidelines.

John Vitale has always felt at ease on the sidelines, but it is only this season that he’s come home.

“I go to church at Immaculate Conception (in Fort Smith) so I know a lot of people around here,” he said. “I was really excited when the job came open. I thought, ‘Hey, what a great way to serve my last years as a football coach coming to a place that I’m familiar with and know a lot of people.’ That’s basically why I did it.”

Along the way, he was assistant coach on a state championship team in Greenwood, made it to the state finals twice in West Memphis and is credited with resurrecting the Paris and Lavaca programs, earning 3A Coach of the Year honors in 1994. He was also selected for the coaching staff of all-state teams in 1995, 1997 and 2002.

“I thought, ‘Hey, what a great way to serve my last years as a football coach coming to a place that I’m familiar with and know a lot of people.’” John Vitale, football coach at Trinity Junior High in Fort Smith

Trinity is Vitale’s first stop at a Catholic school, and he said the team’s inordinate responsibility to demonstrate behavior accordingly is something he takes seriously.

“We expect our kids to always act right, do what’s right. We’re not only representing the football team but we’re also representing Trinity Junior High and this community,” he said. “Our kids are just expected to do things the right way more than anybody else. We really put a lot of stress on that.

“And our coaches, we’re all well-behaved; we’re not like radical type of people or like that. We’re trying to stress that there’s more important things than just winning and losing on the football field.”

Vitale inherits a squad that is heavy on talent and a campus on the rise. The squad is dominated by eighth- and ninth-graders and recent enrollment growth has availed him a stable of good athletes.

“We’ve got a big ninth-grade class, a lot of good athletes among our ninth graders. Along with our eighth-graders coming up behind them I think it’s just going to get better and better as we go,” he said. “Enrollment at the school has gone way up this year, so we’ll probably get 40-45 kids out every year for football.

“Trinity back in the ‘90s was real, real good, so we’re trying to get that instilled in our kids. You know, it’s been done here so let’s get back to where it used to be and be real competitive in everything we do.”

The Vitale era started this summer with the team participating in area camps and 7-on-7 competitions. At a preseason Jamboree held at Fort Smith Northside, the squad performed well, Vitale said, in a final tune-up for the Sept. 1 opener.

“Going into Jamboree, our offense was a little bit farther ahead than our defense,” Vitale said. “But I think we got a lot of improvement in just a week’s time. We strive for defense hard here, that’s one of the things I want to get across to them, we’re going to play good defense.

“Our ninth-graders, I’ve been real pleased with those guys because I’m a new coach coming here and they have adjusted real well. I told them the other day every one of you guys have shown great leadership, and I even asked the other players have you ever seen a ninth grader do anything disrespectful. They said, ‘No sir, we haven’t.’ I’m so proud of our ninth-graders and I want to make sure that they have a good season.”

The first step on that goal started off on the right foot, or more precisely, the right foot attached to kicker Solomon Amador who booted a 27-yard field goal to give the Buffs a 17-16 season-opening win against one of Vitale’s former schools, Paris. Amador also landed the team’s first Player of the Week designation of the year, which includes a traveling “T” award to denote the accomplishment.

And with that, Vitale’s 40th season on the sidelines began.

“We’re independent right now, we’re not in a conference, so we’re playing a lot of teams out of Oklahoma and schools in the 3A and 4A classification this year,” he said. “Our goal is to get back to where we can play in the River Valley (Conference), which is all the 7A junior highs here in this area. We’re hoping in the future we can get back into that league and be able to compete well.”