Dog rescue is one way these Catholics care for creation

Healing, finding homes for unwanted pets is passion with a purpose 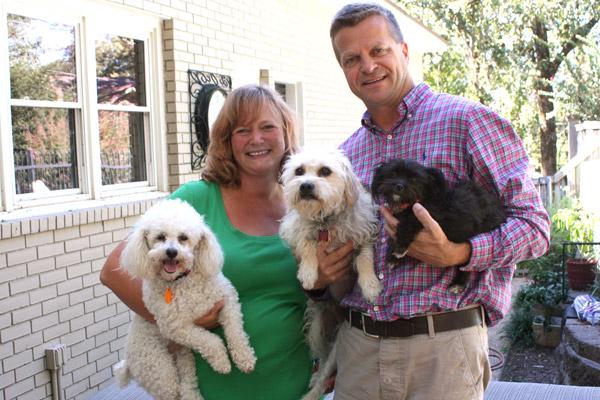 Hambone, a poodle-and-Bichon-Frise mix — a.k.a. “a ball of white fluff” — has a gift for stealing hearts with his loving gaze, his occasional curled-up “Elvis lip” and his snuggles, gently wrapping his two front paws around your arm while his face is gently stroked.

But in order for this sweet scenario to happen, he has to know he can trust you.

The 18-month-old pup has come a long way in his short life after being found in the woods.

“He is not aggressive, but he’s reactive because I’m sure he was hit and kicked. When we first got him if your foot went too close to him when you were taking a step, he would hop back,” said Leslie Henson-Kita, a volunteer with Helping Hands for Little Paws nonprofit rescue, who has rehabilitated him with a structured desensitization plan. “He is ready for adoption. He is such an awesome little dog. I call him a little boy in a puppy suit.”

He is just one of countless dogs that need a forever home in Arkansas. As Catholics celebrate the feast day of St. Francis of Assisi Oct. 4 and take their furry friends to pet blessings at local parishes throughout the month, people like Henson-Kita and Janet Sewell, a shelter volunteer at Charleston Dog Shelter, go the extra mile for animals in need every day.

A little help from heaven

“St. Francis and I are on a first-name basis,” Sewell laughed. “I’ve had many puppies with Parvo,” a contagious viral infection that can kill a dog if left untreated. “I’ll say, ‘OK, Lord I can’t do this myself.’ You have to give them Pedialyte every 30 minutes during the day and every hour each night. I have blessed oils and holy water, and I don’t hesitate to use them. I’ve had more than one puppy with Parvo pull through and it’s not from me or the Pedialyte.”

Sewell, a married mother of two and member of Sacred Heart Church in Charleston, has been volunteering at the shelter for four and half years. The shelter recently received nonprofit status to allow donations toward an actual building — for now, the shelter’s 30 dogs are on a property with covered kennels, but they are still outside in the elements, she said. Throughout the years, Sewell’s family has fostered more than 600 dogs, some for just a night but others for longer stretches.

While the days and nights can be hard, rescue and shelter workers often have their stories, cases that make all the work worth it. For Sewell, little Finn — who her daughter named because it means “warrior” — was one such dog. In July, Finn, an Australian Shepherd mix, came from Alma with a severe case of manage. He was 10 weeks old and weighed just 9.2 pounds instead of 18, she said.

“I just immediately cried when I saw him. Let’s just take him to the vet,” she said, thinking there was no hope to save him. She put his photo on Facebook and asked for prayers — “We don’t hesitate to say we need prayers” — and within days, his photo was spread nationwide and donations poured in that were able to go to him and the other dogs under the shelter’s care, she said. His condition healed faster than the vet anticipated, his fur grew back and he was adopted in August.

“My friend knowing I’m Catholic said, ‘I just found a St. Francis medal. Can I bring it to you?’” and he still has the medal on his collar, Sewell said, saying God saved his life. “There is no doubt.”

Henson-Kita, a married mother of two who attends Immaculate Conception Church in North Little Rock, has seen a lot of heartbreak-to-hope scenarios throughout her six years as a volunteer rescue coordinator for Helping Hands, which specializes in fluffy, non-shedding dogs often pulled from shelters.

“People don’t think poodles need rescue, but they have high grooming needs and they get gnarly pretty quickly if you don’t take care of them,” Henson-Kita said, who works part time at her husband’s orthodontics clinic. “… You can get a purebred dog in a shelter easy; every day, all day long.”

Both agree that people should adopt, not buy from a breeder, because it saves the life of the rescue or shelter dog plus the next one that will fill that space. While there are safe, accredited breeders, some — called puppy mills — are inhumane and churn puppies out purely for profit.

On March 17, 2015, Henson-Kita was part of a puppy mill raid by the Sherwood Animal Shelter where she also volunteers, which rescued 27 Shih Tzus from one house, which had to be torn down. The Kitas fostered one of the female dogs and her puppies.

“They never got food, so she would climb up on the tables” and try to get food scraps as they had always done, said Dr. Alexander Kita. “So they got food wherever they can … then I’d go get the dog food and say, ‘Here eat it,’ and she wouldn’t eat it at first. She finally (did); it all came down to a trust thing.”

As shelters and rescue organizations throughout the country and Arkansas struggle with overcrowding, Sewell and Henson-Kita said spaying and neutering is a priority.

Sewell, who works as a special education aide at Charleston Public Schools, said dogs are often left at a shelter after a person or family brings home a puppy without being emotionally or financially prepared for the responsibility.

“If they do not feel they have the time to commit to it and are not willing to consider this life a member of their family, they don’t need to take in a dog or any animal for that matter,” Sewell said.

A work of mercy

In September, Pope Francis declared a new spiritual and corporal work of mercy called “Care of Creation” that encourages Catholics to contemplate the gifts of God’s world to us and to do “simple daily gestures which break with the logic of violence, exploitation and selfishness,” that harm God’s creations, he wrote.

For Catholic animal-lovers, donating to, fostering or volunteering time at a shelter or rescue group can make a difference.

“It’s nice to have people come out and brush them for 10 to 15 minutes. Or to play fetch for an hour,” Sewell said.

“I think everybody has to have a personal ministry, and we love pets,” Henson-Kita said. “This is just our way of giving back to the world that we live in.”

For more information about these organizations, visit helpinglittlepaws.com and search “The Charleston Dog Shelter” on Facebook.