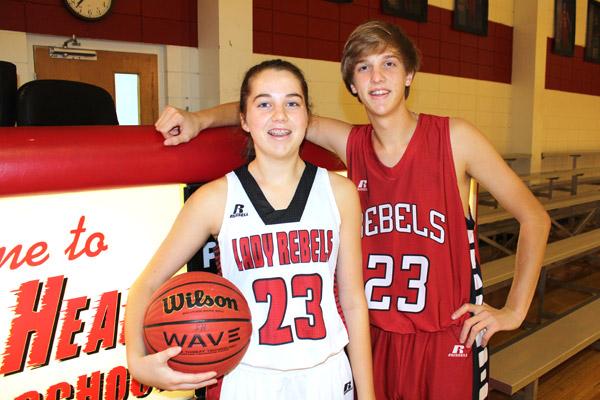 Dwain Hebda
Madeline and Cole Bottoms show off their No. 23 Sacred Heart School game jerseys. The siblings wear the number in memory of their older brother Drew, a basketball standout and member of the class of 2014.

Dwain Hebda
Madeline and Cole Bottoms show off their No. 23 Sacred Heart School game jerseys. The siblings wear the number in memory of their older brother Drew, a basketball standout and member of the class of 2014.

MORRILTON — Aaron Duvall, athletic director and head boys basketball coach at Sacred Heart High School in Morrilton, handles a lot of details in the final run-up to the season’s first game, not the least of which is issuing uniforms. This year, however, that task was simplified by one: No. 23 was a forgone conclusion.

“I put it aside the first day,” Duvall said. “The jersey was off limits. We knew that jersey was going to be Cole’s.”

Anyone who knows anything about basketball knows the significance of No. 23. It’s Jordan’s number. LeBron’s number. But what’s less well-known, unless you cheer for the Rebels or seemingly every team that plays against them, is the crimson and white No. 23 carries even more significance here, draped over the lanky, athletic frames of senior Cole Bottoms and his ninth-grade sister Madeline.

“(The jersey) makes it feel like he’s a part of me, out there while I’m playing” Cole said. “I feel honored to kind of live his legacy.”

This is the second season the Bottoms kids have carried Drew Bottoms’ legacy, literally, on their shoulders; the second season since the June 2014 accident that claimed the life of their older brother. Drew graduated Sacred Heart as salutatorian and the ultimate over-achiever with a raft of academic honors and extracurricular activities to his credit.

He worked as hard on the court as in the classroom, scoring more than 1,000 points in his high school career and named to 501 Magazine’s all-area team. Bottoms’ game was gritty, always flashing to the hoop, always seeking the contact and a trip to the free throw line.

He’d planned to carry that same tenacity to college and his civil engineering courses, plans cut short by a deer that hit the ATV he was riding. The tragedy sent shock waves through the small, close-knit Sacred Heart parish and the Bottoms’ home church, St. Elizabeth in Oppelo.

“If you don’t have faith, I don’t know how people get through something like this,” said Patti Bottoms, the kids’ mother and a teacher at Sacred Heart School. “Faith teaches you everything happens for a reason and when it’s your time, it’s time.”

The outpouring of support from the rural congregations and student body were overwhelming. The family started a memorial fund in Drew’s name to help support the school hoping to raise $10,000 in five years. It took just seven months. Two of Patti’s cousins designed a memorial T-shirt with the hopes of selling a few and kicking in the proceeds.

But for everything good that’s come along over the past two years, the empty spot around the Bottoms’ family table remains. Since they were small, the kids were at the center of Sacred Heart’s hoop-centric culture and Drew’s absence in the stands from which he would have assuredly cheered his siblings, still feels strange.

“Basketball’s a big thing for us. We have a goal out here and they’d all be playing all the time trying to one-up each other like siblings do,” Patti said.

It was here that, in classic brotherly fashion, Drew meted out the driveway drubbing, particularly to Cole.

“It definitely helped me get a lot stronger because he was always a lot bigger than me growing up. He’d bully me around,” Cole said. “It made me a lot stronger and a lot better player, I think.”

Even clad in his brother’s jersey and playing the same shooting guard position, Cole today cuts a much different figure. A silky smooth shooter with a drawl to match, he doesn’t drive as much as Drew did and with more natural athletic and academic ability, affects a more effortless style. Drew’s work ethic and hard-charging motor made him a natural leader; Cole leaves the captain’s stripes to someone else while he does his thing.

Truth be told, Madeline more closely evokes Drew in playing style and tenacity. She’d played up since she was a seventh-grader because of low numbers.

A framed No. 23 jersey hangs above the entrance to the Rebels gym in Drew’s memory, but the Bottoms kids need no such reminder of their older brother. So, as the ball goes up on a new season their attention shifts to business at hand. A championship banner would be an apt tribute, after all.

“We didn’t have the year last year that we expected to have. We were kind of down,” Cole said. “But I feel like this year we can be a lot better.”