Christian Pineda thankful for truck, says it's made 'a big difference' for his family 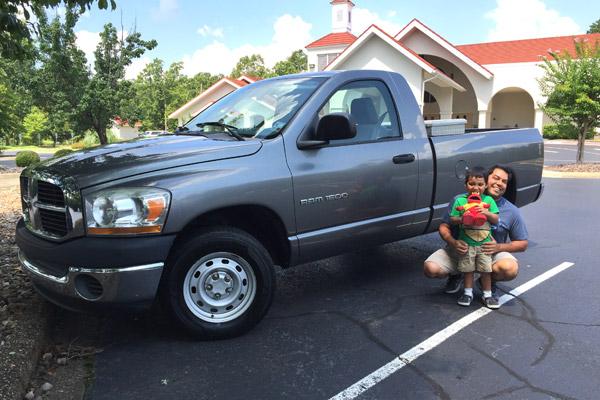 Christian Pineda and his son Daniel, 4, stand beside their new 2006 Dodge Ram pickup on Aug. 5. Amy Seiter, who died Aug. 27 of cancer, donated her truck to the Pineda family.

Christian Pineda and his son Daniel, 4, stand beside their new 2006 Dodge Ram pickup on Aug. 5. Amy Seiter, who died Aug. 27 of cancer, donated her truck to the Pineda family.

When Christian Pineda drives his 2006 Dodge Ram pickup he’s carrying more than his supplies for his self-employed painting business in Hot Springs Village. He’s carrying the generous spirit of Amy Seiter -- a woman he never met who changed his family’s life.

“Of course, this is a working truck for me right now, but I’m going to keep it as nice as she kept it to remind me even though somebody was going through a tough time, they thought of helping someone else,” Pineda said. “It’s not just any truck and it has a lot of meaning to me and my family definitely.”

Seiter was diagnosed with breast cancer in 2009 and when she was no longer able to drive, she told her family, “You know I’d really like to find a family that could use this truck.” Through Catholic Charities of Arkansas, her truck went to the Pineda family Aug. 5. She died Aug. 27 at 36 years old.

“I wish everyone could have known Amy. She was just a sweet vibrant person and the fact that she could make a difference for this family made her really, really happy too,” said her mother, Terri Seiter. “She knew there weren’t going to be many more opportunities to give so this was extra special to her.”

Pineda, a cradle Catholic, immigrated to the United States in 2002 with his wife Iliana from Honduras after increasing violence in the area.

They settled in Hot Springs Village where their four children were born -- Jimena, 8, twins Natalia and Adrian, 7, and Daniel, 4. They attend 10 a.m. Mass on Sundays at Sacred Heart of Jesus Church, and their kids are in religious education by 9 a.m.

“It is very important,” Pineda said of his faith. “Basically nowadays, you can see how the world is turning and it’s our job as parents to teach our children to be afraid of God … there will be a time when they make their own decisions, we hope they make good decisions.”

It was the kind of strong faith that Amy Seiter had growing up with her two siblings, attending St. Joseph Church in Conway.

“I think she lived out her faith through giving to others. Amy was the most giving person, not only in things but of herself. She was very open to people and very accepting of people,” Terri Seiter said. “She was just a real giver. That’s how I feel like God was really seen in her.”

Seiter gave her skills to a career in geology, most recently as senior project manager at Harbor Environmental and Safety in Little Rock. She gave money to women in third-world countries who were trying to start their own businesses. She gave her heart to fiancé Wayne Mills, who died in the summer 2015 saving the life of a drowning 6-year-old girl. On days when she wasn’t feeling well, she still gave food to squirrels and birds, watching them snack on the feeders she put out all over her backyard.

She gave her all fighting cancer, enduring a double mastectomy and several treatments, including rounds of chemotherapy and radiation. And when she could not physically give any more in this life, she gave her truck.

“I think Amy just had a strength that was kind of unmatchable,” her mother said, with her father Mark adding, “They’d try something and it’d work for a while and then it wouldn’t work anymore. It kind of got to the point where there wasn’t much else they can do.”

As Seiter struggled with pain and grief, Pineda and his wife were struggling in a different way -- two jobs, one car. His wife went to work as a self-employed housekeeper when their youngest child started school, making the two working parents at the mercy of each other’s jobs when it came to transportation.

The Pinedas saved all last year for a down payment on an SUV. For a few days, the couple was set. Then, the transmission began to fail on their minivan. With no money left to fix it, they were back to square one.

In late summer, Marvin Young, a member of the Family Assistance Committee at Sacred Heart who knew the Pineda’s predicament, called Catholic Charities of Arkansas to ask if they had any vehicles available. Within a few hours, Patrick Gallaher, executive director of CCA, received a call from Matt Mallett, St. Joseph business manager, asking if they knew of a family who needed a truck.

“It was a very Christian thing to think of other people with, her condition,” Young said, who also recently finished chemotherapy for lymphoma. “They’re a hard-working young family and they’re very active in the church.”

Mark and Terri Seiter said their daughter loved her truck, always going the extra mile to clean and maintain it, and “was thrilled” when she learned of the Pinedas.

As he sits behind the wheel, Pineda is reminded of her sacrifice.

“It tells you a lot about how she was and how her family raised her,” he said. “She made a big difference in a family that was struggling. It’s uplifting to see someone going through a tough time … but always having the time to think of others.”