Game on: CHS doubles teams push each other to titles 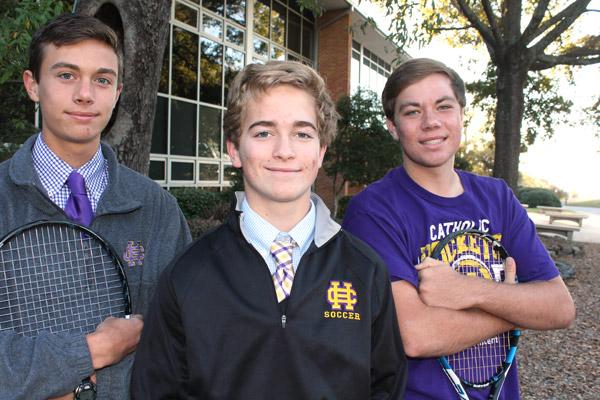 Dwain Hebda
State doubles champions Steven Weeks (left) and Henry Nolan grin for the camera with conference champ freshman Jackson Davis. The three players, along with Phillip Abston, met in the finals of the conference and state tennis tournaments this year.

Dwain Hebda
State doubles champions Steven Weeks (left) and Henry Nolan grin for the camera with conference champ freshman Jackson Davis. The three players, along with Phillip Abston, met in the finals of the conference and state tennis tournaments this year.

It is said that every great athlete or team is made even greater when pushed by a rival, those opponents who always bring out the best in one another. Muhammed Ali had Joe Frazier. Magic Johnson had Larry Bird. The New York Yankees have the Boston Red Sox.

And at Catholic High School in Little Rock, two young doubles teams treated tennis fans to a season full of excitement that culminated with the Rockets’ second straight state championship and a fistful of medals to boot.

“I guess (the state win) felt kind of expected. We weren’t as nervous,” said Henry Nolan, sophomore doubles player. “It felt good to just reclaim the title for Catholic.”

A year after 2015’s state title run, Nolan and partner Steven Weeks are stronger, more skilled and finely attuned to each other’s strengths on the court. They blistered through the regular season without dropping a single match. The freshman team of Jackson Davis and his partner Phillip Abston were largely relegated to the deep shadow cast by their teammates before pulling a stunner at this year’s conference meet.

“I didn’t really think of them as teammates (during the match). ... I guess it was just a lot easier to just go out there and play if you already knew that the team won it, so then it’s just kind of playing for yourself.” Henry Nolan, sophomore doubles player

“This year and last year during the regular season we didn’t lose a match,” Weeks said. “Last year, we won conference but this year in conference we were actually beaten by the No. 2 Catholic team.”

Purists will say that a true rivalry can’t be realized over a single match or even a single season, but for individual athletes who only have four short seasons in which to compete, one such moment can set in motion a remarkable chain of events. The upset at conference gave the rivalry a much different flavor as the teams entered the state tournament.

“I’ve played tennis on big stages,” Davis said. “I’ve played nationals and the Southern Closed, the biggest tournament in the South. I can handle pressure, so I didn’t really feel nerves.”

As one duo looked for redemption and the other for further validation, neither squad would disappoint at the state tournament. Weeks and Nolan steamrolled to the finals in straight sets while Davis and Abston showed intestinal fortitude, including a grueling three-set win in the semis to set up an all-Rocket final and all-around grudge match.

“In the finals we started off being a little nervous since we lost to them last time, but we just walked out there confident and it seemed to work,” Weeks said.

“We definitely had a harder road to finals,” Davis said. “I’m not going to make excuses and say that we were too tired, but we definitely had a little fatigue, but nothing that was too hard to handle. Mentally, I wanted to win and so did Phillip, but we knew that they wanted it because we had beat them before and that they were a little better rested.”

There would be no Cinderella finish; Weeks and Nolan’s dominance in earlier rounds provided fresher legs and they were determined to get the sting of the conference meet finals out of their systems, winning 6-3, 6-3 for their second state title.

“I didn’t really think of them as teammates (during the match),” Nolan said. “I mean, it obviously wasn’t as stressful because it was Catholic and we already won the team title because (singles player) Parker Stearns was also in the finals. I guess it was just a lot easier to just go out there and play if you already knew that the team won it, so then it’s just kind of playing for yourself.”

A week later at the Overall meet comprised of the top finishers at the state meet, the duo put an exclamation point on the season, winning the meet and solidifying their place as the best pound-for-pound tennis duo in the state with half of their careers yet to be played.

“We know exactly where the other one likes to hit a serve,” Weeks said. “We know how much one should volley. We just know everything about each other because we’ve played with each other so long — where we’re going to hit the next shot and everything. We have really good chemistry with each other.”

Sadly, the rivalry will have no second act as Abston transferred to another school two months into the school year at the conclusion of the tennis season. Davis said while he couldn’t say for sure whether he’d play singles or doubles next year, this much is certain:  The purple and gold are the most dominant force in high school tennis and he figures to play prominently in its continued success.

“Honestly, I’d like to play doubles just because our singles players are really good, but it would be difficult not being able to play with Phillip so I might have to make the transition,” Davis said. “It’s up to whatever my coach wants me to do.”