Martyred Oklahoma priest to be beatified in 2017 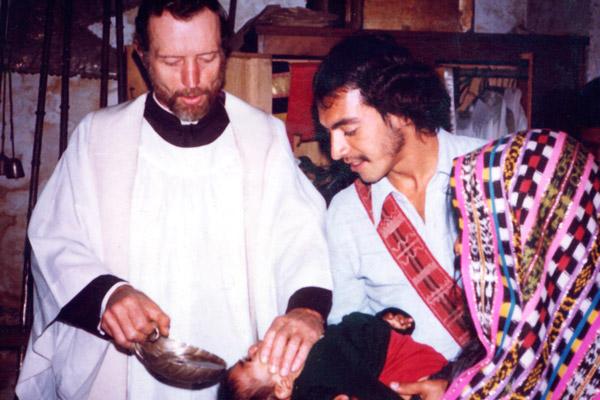 Bishop Anthony B. Taylor expected that day would come when Pope Francis would recognize the martyrdom of Father Stanley Rother.

“His case was so clear,” the bishop said of the only American-born martyr who was recognized by the Vatican Dec. 2. “It fits the pattern of so many others who gave their life for the faith in Guatemala in that period.”

Bishop Taylor, who met the Oklahoma City priest briefly one time, was the episcopal delegate for the sainthood cause for Father Rother from 2007 until he was named the bishop of Little Rock in 2008. He personally interviewed 50 people in Spanish and Tz’utujil, a Mayan language, about their knowledge of Father Rother and the virtues he displayed.

Bishop Taylor and 20 other Arkansans visited Guatemala in July for the 35th anniversary of Father Rother’s death.

The recognition of his martyrdom clears the way for his beatification, the final stage before canonization. Bishop Taylor expects the Mass to take place in Oklahoma City in 2017.

Bishop Taylor believes this case taken by the Archdiocese of Oklahoma City is important because there are hundreds of other named and unnamed martyrs in Guatemala who will probably never be recognized officially by the Church.

Because Father Rother was killed in Guatemala, his cause should have been undertaken there. But the local church lacked the resources for such an effort. The Guatemalan bishops’ conference agreed to a transfer of jurisdiction to the Oklahoma City Archdiocese.

A book called “Faithful Witnesses to the Gospel” listing dozens of catechists, priests and sisters was presented to St. John Paul II when he visited the country in 1996.

“I am very pleased that the Congregation (for the Causes of Saints) has recognized that Father Rother is a martyr, that he gave his life for Christ, that he was killed out of hatred for the faith,” the bishop said.

Father Rother, born March 27, 1935, on his family’s farm near Okarche, Okla., was brutally murdered July 28, 1981, in a Guatemalan village where he ministered to the poor.

He went to Santiago Atitlan in 1968 on assignment from the Archdiocese of Oklahoma City. He helped the people there build a small hospital, school and its first Catholic radio station. He was beloved by the locals, who called him “Padre Francisco.”

Many priests and religious in Guatemala became targets during the country’s 1960-1996 civil war as government forces cracked down on leftist rebels supported by the rural poor.

The bodies of some of Father Rother’s deacons and parishioners were left in front of his church and soon he received numerous death threats over his opposition to the presence of the Guatemalan military in the area.

Though he returned to Oklahoma for a brief period, he returned to the Guatemalan village to remain with the people he had grown to love during the more than dozen years he lived there.

He was gunned down at the age 46 in the rectory of his church in Santiago Atitlan. Government officials there put the blame on the Catholic Church for the unrest in the country that they said led to his death. On the day he died, troops also killed 13 townspeople and wounded 24 others in Santiago Atitlan, an isolated village 50 miles west of Guatemala City.

Many priests and religious lost their lives and thousands of civilians were kidnapped and killed during the years of state-sponsored oppression in the country.

While his body was returned to Oklahoma, his family gave permission for his heart and some of his blood to be enshrined in the church of the people he loved and served. A memorial plaque marks the place.

Father Rother was considered a martyr by the Church in Guatemala and his name was included on a list of 78 martyrs for the faith killed during Guatemala’s 36-year-long civil war.

News of the recognition was welcomed in Oklahoma.

“This comes as a great joy to all of us here not only in Oklahoma, but I think it’s a great blessing to the Church in the United States,” Archbishop Paul S. Coakley of Oklahoma City told Catholic News Service Dec. 2.

He also called the recognition of the priest’s martyrdom a gift to the Catholic Church in Guatemala.

Archbishop Coakley recalled how both he and Father Rother are alumni of Mount St. Mary Seminary in Emmitsburg, Md. He remembered a ceremony at the school a few months after the priest’s death in which a plaque was erected in his honor.

“His witness has marked me from my earliest days in priestly formation,” the archbishop said. “It’s a blessing to be the archbishop now who has the opportunity to bring to fruition the work of my predecessor Archbishop (Eusebius J.) Beltran.”

The sainthood cause for Father Rother was officially opened in 2007.

Maria Ruiz Scaperlanda, author of a 2015 biography of the priest, “The Shepherd Who Didn’t Run: Fr. Stanley Rother, Martyr from Oklahoma,” wrote in an e-mail that the martyrdom recognition was “an incredible gift not only to the United States, but to the universal Church.”

“I am delighted and grateful that more people will come to know and be changed by his beautiful story,” Scaperlanda said. “Not only because of his death as a martyr. But even more significantly, because his life and his priestly service remain a testament to the difference that one person can, and does, make.”

Is it a miracle? Diocese gathers facts in alleged healing

Jesus is worth the sacrifice, no matter how high the price