Lilly Hill said she thanks God while she runs, which gives her confidence 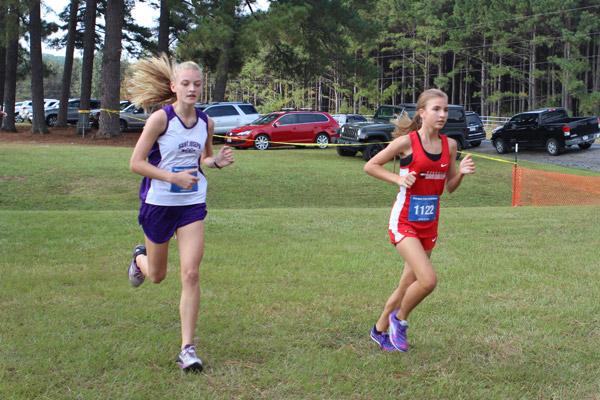 Courtesy Ray Nielson, St. Joseph School
Lilly Hill (left) chases down an opponent during a 2016 cross-country meet. The Conway eighth-grader hit the running scene with a bang setting a school record and placing fourth at the district meet in her first year of organized competition.

Courtesy Ray Nielson, St. Joseph School
Lilly Hill (left) chases down an opponent during a 2016 cross-country meet. The Conway eighth-grader hit the running scene with a bang setting a school record and placing fourth at the district meet in her first year of organized competition.

In the 1981 biopic “Chariots of Fire,” Eric Liddell is a Scottish man of God who uses his dominance on the track to bring people the Good News. Qualifying for the 1924 Paris Olympics, he’s confronted by his sister who’s afraid his notoriety as an athlete is starting to cloud their goals of being missionaries.

“I believe God made me for a purpose, but he also made me fast,” Liddell explains to his sister. “And when I run, I feel his pleasure.”

Lilly Hill isn’t an Olympian — yet — but she shares Liddell’s gifts both physical and spiritual on the race course. The eighth grader from St. Joseph School in Conway has only been running for a few years and just wrapped up her first competitive season a few weeks ago. But she’s already shown the heart of a true champion.

“The first race, there were so many people there and because I go to a small school and there were over 200 kids there, we were nervous at first, all of us were,” she said. “On that race I got eleventh in my division and twentieth over everybody.”

Lilly’s mother Kay Lynn was there to see her daughter’s first race. She remembers how small she looked in a sea of runners at the start and what it felt like to watch her round the final bend into the home stretch.

“I was just so proud of her. I thought, ‘Wow she’s really good,’” Kay Lynn said. “There were just so many of them, and it started out, they all just all took off and had to come to a narrow path and then they go through the woods. When she came out in the first group I was just cheering her on. I’m one of her biggest cheerleaders.”

Lilly set a new school record for her grade that very first race and she only got faster from there, steadily finishing higher and higher in the order until she placed fourth at the District 2A-4 meet. And to think she only took up running to stay in shape for soccer, something she’d done since she was a tot, coached by her mom.

“I always liked to run and she has played soccer and originally she started running with me to keep in shape for soccer,” Kay Lynn said. “Then, even during the summers she would run and it (was) just kind of a good, fun time we would spend together.”

Those training runs, which sometimes include little brother Jake and dad Jeff, still provide cherished bonding for mother and daughter, or at least as much bonding as can be had chasing a gazelle.

“Even before she started running cross country, it was probably last summer or two, I would tell her, ‘I’ll meet you at the house,’” Kay Lynn laughed. “And she’d have water waiting for me when I got there. I have my pace and she has hers.”

Lilly’s in-season training meant reporting for practice at 6 a.m., something she said was initially a shock but then grew on her for her time with her friends. It also provided her a prime opportunity to work on her spiritual life.

Lilly’s goals in the sport are the same as every runner’s, that is to get faster and win a district title. She’s also intensely focused on getting the upper hand in the budding rivalries she’s already developed with athletes in competing schools.

“There were one or two Quitman girls that I’ve been trying to beat all season,” she said. “They’re in ninth grade, so next year I might be in front because this year they were in front of me.

“Mental toughness always helps. Just to know that you have to give it all you’ve got, because once you’re across the finish line you’re going to be happy that you finished.”