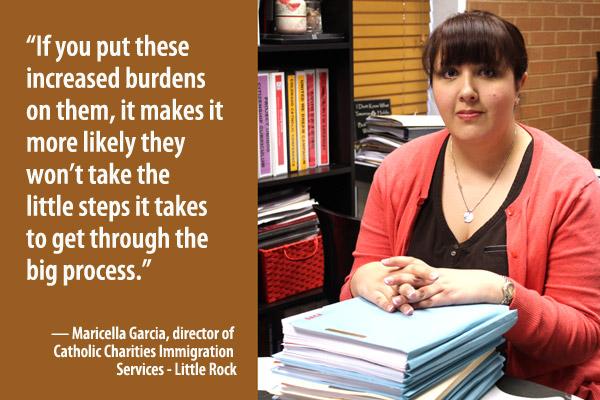 For immigrants trying to escape persecution, get their families to the United States safely, apply for citizenship and those just simply wanting to renew their green cards now have an extra burden, this time on their pocketbooks.

“I think a lot of people have a misunderstanding of how immigration works. The question you hear is ‘Why don’t they get in line and become citizens?’ First thing, it doesn’t work that way,” Garcia said. “There’s little steps they have to take and if you put these increased burdens on them, it makes it more likely they won’t take the little steps it takes to get through the big process.”

In addition to all the fee hikes, most applicants must pay $85 for a biometric services fee, which covers the background checks done by USCIS.

Common applications that the Little Rock and Springdale offices see from clients include:

“This is a really big hike; pretty much in everything we do the fee has been raised,” Garcia said, adding her clients are “shocked.”

“I think it’s really hard to understand if you’ve never dealt with immigration. What you get on TV is not the reality you see out here,” she said.

USCIS Director Leon Rodriguez said in a Dec. 15 USA Today article that “as an agency dependent upon users’ fees to operate, these changes are now necessary to ensure we can continue to serve our customers effectively.” The agency did not raise fees after fiscal year fee reviews in 2012 and 2014.

Head said while he respects the congressional intent for the immigration process to be self-supporting, “I think it’s gone beyond that and the fees have become prohibitive. I suspect the intention behind it is more than financial responsibility. It’s gone to political intent to prevent more immigration or restrict it.”

Some applicants can apply for fee waivers, but they must meet the poverty guidelines and/or demonstrate a hardship, an often-strenuous process especially for victims of crimes.

“I have a client who was a victim of domestic abuse from her husband. He filed the taxes and did not file her on the taxes so there’s no proof of her income to introduce to USCIS. He was arrested for abusing her, convicted and deported,” Garcia said.

The client was pregnant and had to have an emergency C-section, causing her to take off work longer than anticipated. Now, with five children, her finances are strapped.

“I have to show all that. We have to explain it on the form, bills that she has. That’s what makes it so hard to do. You have to really paint the story for them.”

Garcia said CCA has to charge clients certain fees on top of USCIS fees. She said a “simple” U Visa -- one for a client with no major immigration record -- could cost $650, but added at a regular attorney, the cost could be thousands. It could take her 50 hours to put the application package together.

“Most of what I see now are children that are victims of rape, 13 or 14 years old. They have to explain exactly what happened and how it’s affected them, their words, no one else’s,” she said. “It’s more than legal work and involves being able to deal with trauma and being conscious of that.”

Stories like these put a face to immigrants that are often stereotyped. Head said his clients are “humble, unassuming and the least likely to feel entitled.”

“That very comment, ‘Why don’t people just wait their turn in line’ sounds reasonable but try telling a 70-year-old mother that she’s going to have to wait another 25 years for her adult daughter to get an immigration benefit that allows her to come see her by which point she might not be living,” Head said. “Tell a brother who is trying to get his sister out of an abusive gang neighborhood in El Salvador, wait 25 years until she can come here legally.”

How and why to help

Grants from places like Christ the King Church in Little Rock who gave $4,800 in 2016 have helped lower USCIS fees for clients on forms like Deferred Action for Childhood Arrivals (DACA), Garcia said. Anyone can donate to Immigration Services to help lower the fees for clients.

“Try to put yourself in a position if some unimaginable set of events happened in the U.S. and your family was separated from you and you’re unable to sleep through the night for fear they could be murdered,” Head said, adding the response from the government is, “just get in line; we’ll fix it in 25 years. I would hope compassion would get the better of your reasoning.”

Even applications that have been submitted years ago are still on hold. Garcia said immigration is “very behind” on U Visas. Though people have been approved, only 10,000 are given in a year and there are currently 86,980 applications pending with the federal government today, Garcia said.

The mission of Catholic Charities is to keep families together and by Catholics donating to immigration clients, they’re helping them become legal, Garcia said.

“It’s not that people don’t want to do the right thing and get status. They want status,” she said. “… We help keep people together. The families get to be reunited and the person who is an immigrant gets legal status. They are here legally and you’ve accomplished their goal. Even if you think they should wait in line, donating is one way to make the line move.”

To learn more about ways to donate, visit http://www.dolr.org/catholic-charities/immigration-little-rock#how-you-can-help.