First-year coach looks to lead MSM Belles back to state 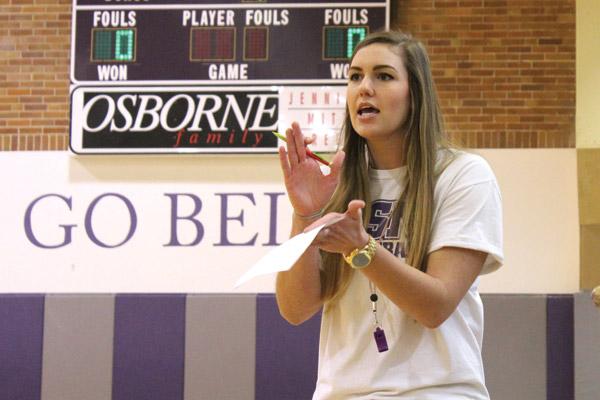 Lauren Ramsey, 26, carries herself in practice with the cool confidence of a coach many years her senior. The first-year head coach of the Mount St. Mary Academy varsity basketball team shouts instructions to her players only sparingly and without the snarl that others do, but that comparatively soft voice still instantly nudges players into a higher gear as they sprint through their drills.

“It’s a process and it’s hard to teach somebody to go harder than they’ve ever gone before. A lot of girls don’t get that,” Ramsey said. “That’s something we talk about from Day One. You should always have that desire and that fire to want to win.”

The competitive fire that led Ramsey to a decorated four-year collegiate basketball career is something that’s noticeable at all times. She’s not cuddly exactly, doesn’t gab with players between the lines, but her fondness for her squad is palpable. It’s a hard-learned balancing act that keeps work and play in their own lanes.

“I went (into coaching) having this mindset I needed to be this hard-nosed coach,” she said. “I wasn’t going to have these personal relationships with any of these girls; I was just their coach and it was going to be intense and it was going to be tough and they were just going to work their butts off. And that’s what I did my whole first year, but at the same time I didn’t really know what I was doing. That first year was a huge learning experience for me.”

Five years later, much has changed. Ramsey has rounded out her coaching repertoire and become more approachable off the court, something she credits to experience and a core group of seniors she’s led all four years.

“That group came in and their fire and their passion helped me to see I could get to know these girls a little bit while also getting them to be intense and fierce on the basketball court,” she said. “They helped me to really dive in to learn how to coach. It’s a huge learning process; to this day I learn something new just about every week.”

“She’s definitely relatable, she’s closer to our age,” said senior Lizzie Allgood. “When you go into the gym and you see your coach lifting weights at 5:30 in the morning and then see her throughout the day, she knows how to push your buttons.”

Ramsey, a member of Immaculate Conception Church in North Little Rock where she also attended school, graduated here in 2008, bound for Lyon College in Batesville. Of her four years on Mount volleyball and basketball teams, her junior season was the last time the Belles qualified for the state basketball tournament, a cool 10 years ago. Then as now, she’s determined to lead the team to postseason play.

“For us to make it to state means winning conference games and that’s something Mount has not done the past four or five years,” she said. “I told somebody the other day if we win a conference game or two, I’m just going to walk in the locker room and cry, because I’m going to be so happy and it’s not even for me. It’s for the girls, the ones that have stuck it out through the rough years.”

“(Making it to state) would mean a lot,” said senior Kara Rogers. “Even if we make it and we don’t make it very far, that would definitely leave an impact at Mount and show the rest of the league that we’re not just a pushover team. We’re not just a team that’s going to be an easy win or anything like that. It would mean a lot to all of us, especially us seniors and her.”

Documentary about Arkansas priest to premiere May 24