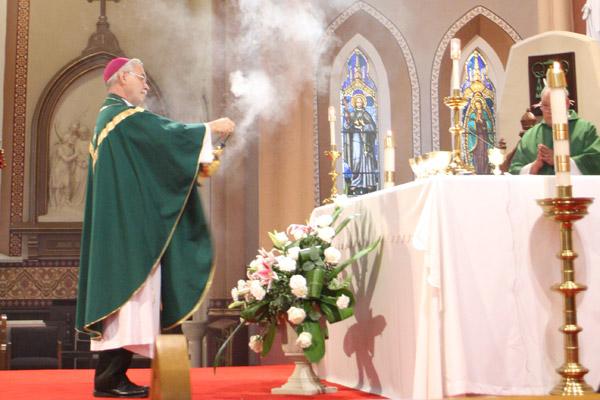 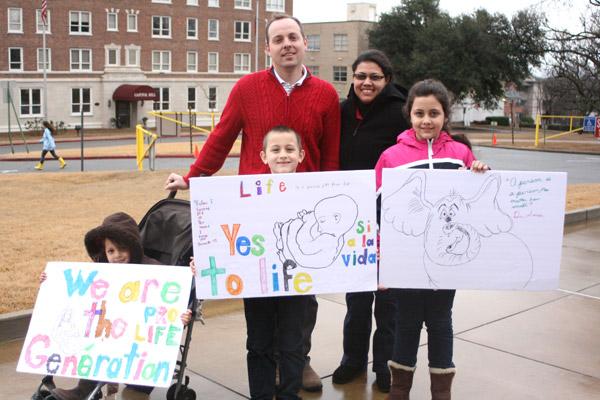 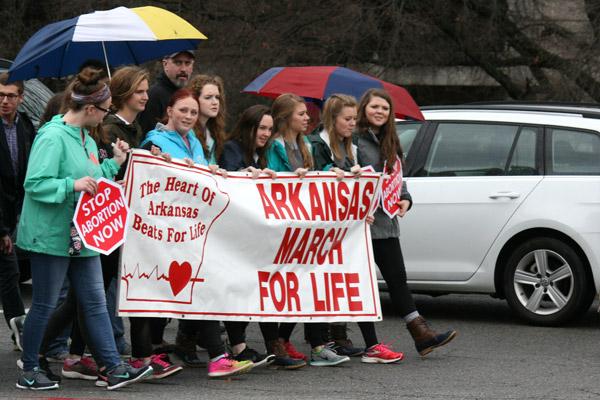 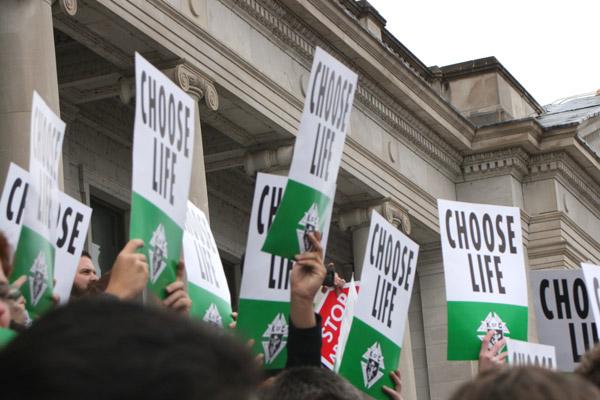 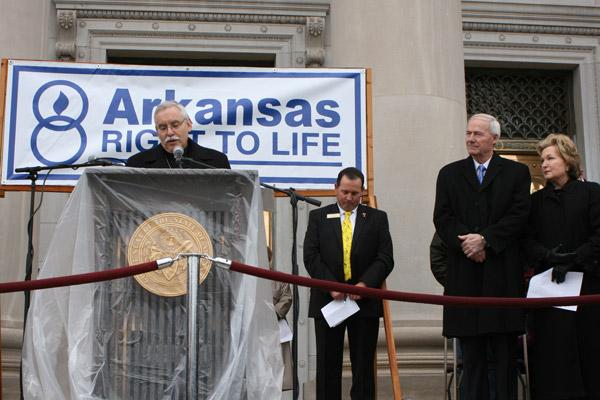 March for Life zeros in on Safe Haven Law education 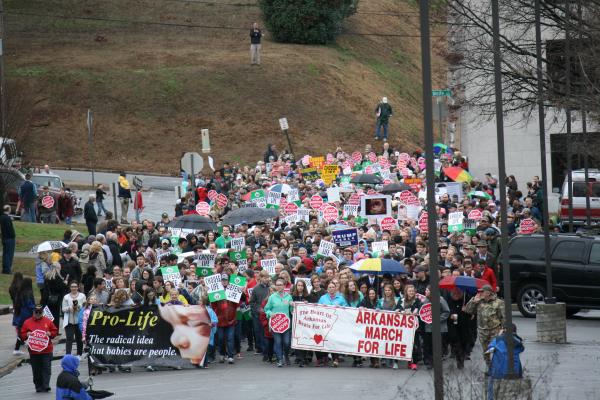 Malea Hargett
March for Life participants gather at the beginning of the march route behind the State Capitol in Little Rock Jan. 22. Bishop Anthony B. Taylor led the opening prayer.

Malea Hargett
March for Life participants gather at the beginning of the march route behind the State Capitol in Little Rock Jan. 22. Bishop Anthony B. Taylor led the opening prayer.

Clad in a white and blue jacket with the words “Remember the Unborn,” Doug Young marched toward the Arkansas Capitol steps, recalling what he said was the “first crisis pregnancy” — the birth of Jesus.

Young, who attended the Mass for Life at the Cathedral of St. Andrew, told Arkansas Catholic before the March for Life that as a member of the global organization Life Runners, which prays for the unborn before walking or running to raise awareness of pro-life issues, the march is a step toward change.

“It’s the culture of death that the culture of life needs to stand up and fight against,” said Young, a parishioner at Immaculate Conception Church in North Little Rock.

The 39th annual March for Life, sponsored by Arkansas Right to Life, has brought attention to pro-life issues since the Supreme Court decision of Roe v. Wade made abortion legal in the United States. The capitol was flooded with a couple of thousand people, with many holding umbrellas and signs with messages like “America, God is watching” and “We Stand for Life.”

Though it was cold and misty, Rose Breakfield, parishioner at St. Joseph Church in Conway who has attended the march at least a dozen times, said “a little rain should not dampen our enthusiasm.”

“Talk is cheap. You really have to go through and show your faith in more than words,” she said. “… Things may never be perfect but I think we’re moving in the right direction.”

Every year ahead of the march, Catholics gather to pray for the unborn. On Saturday, Jan. 21 Weekend for Life (previously called Weekend Extravaganza), a pro-life youth retreat sponsored by the diocese’s Catholic Youth Ministry Office, brought youth together from 29 parishes within the state to learn about pro-life issues. The diocesan Respect Life Office held a Vigil for Life at the Cathedral of St. Andrew on that Saturday starting at 6:30 p.m. with adoration that continued until 7 a.m. Sunday.

A Rosary for Life was held before the noon Mass for Life at the Cathedral, celebrated by Bishop Anthony B. Taylor. During his homily, the bishop said it was the first time in his eight years as bishop celebrating the Mass for Life that there was hope in overturning Roe v. Wade, based on President Donald Trump’s promise to appoint a pro-life Supreme Court justice. However, he also said neither political party entirely advocates for pro-life issues.

“Our defense of life doesn’t stop when the baby leaves the womb, nor is it limited to medical matters like euthanasia and fetal stem-cell research, nor matters of law like the death penalty, nor matters of compassion like the welcoming of refugees — though all of this is included. It is a seamless garment that embraces all of life, including our attitudes as well as our laws,” Bishop Taylor told the packed church of 400 parishioners.

It was the first time attending the Mass for Life for Cathedral parishioners Annmarie Neal and her three children, twins Hannah and Callum, 10, and Rowan, 8, who served on the altar.

“It was a great honor to serve with the bishop,” Hannah Neal said, adding that she is pro-life because “I think that they should know how it is to live.”

Bishop Taylor opened the March for Life with a reading from the Book of the prophet Ezekiel and prayer for the Lord to “take away our stony hearts and the stony hearts of our beloved country.”

Several elected officials attended the march, including Rep. Andy Mayberry of Hensley (Pulaski County), who is president of Arkansas Right to Life, and Gov. Asa Hutchinson, who vowed to sign the recently proposed House bill aimed at ending dismemberment abortion in Arkansas.

While ending abortion is a top priority for the nonprofit, this year the focus was also to prevent infanticide.

“Infanticide is when infants are killed, newborns. Specifically when they’re abandoned or die from the elements or die directly from suffocating or drowning them. It happens in Arkansas,” said Rose Mimms, executive director of Arkansas Right to Life. “… That’s the whole purpose of the march this year is to promote that Safe Haven Law to save some babies and help these women.”

In 2001, Arkansas passed its Safe Haven Law, which was co-sponsored by state Sen. Cecile Bledsoe of Rogers. It allows mothers to leave their baby who is 30 days or younger with an employee at an emergency room or a law enforcement agency without fear of endangering or abandonment charges, according to arkansassafehaven.org.

Mimms said lack of funds to promote the law led to situations like Fabiola Torres-Onate of Hot Springs faced in 2015. Torres-Onate, then 18, who did not know about the Safe Haven Law, gave birth in secret and left her son on a neighbor’s doorstep. She was then arrested. Mimms said she was “lucky” to just serve probation and community service by sharing her story to promote the Safe Haven Law.

Monica Kelsey, founder of Safe Haven Baby Boxes who spoke at last year’s Weekend for Life during the March for Life weekend, was the march’s keynote speaker. Kelsey, of Woodburn, Ind., was adopted and found out years later she was conceived in rape and her mother had abandoned her two hours after she was born. She travels to share her pro-life message and promotes information about safe haven laws.

“We have to be out there giving awareness and education of this law. This isn’t a one-person job,” Kelsey said. “This is a community job and we have to be on the front lines of that as well because if you are truly pro-life, you are from conception to natural death and these children that are born deserve to be protected as well.”

Stephanie Gandolph, youth ministry director at St. John Church in Hot Springs, brought several students to the march that also attended the youth retreat, explaining that in today’s society, “it’s so easy to go get an abortion. If the youth really knew life starts at conception,” the world would have a different view.

While optimism was palpable throughout the crowd, Bryan Avila, 14, a member of St. John’s, was inspired by his first march, proudly holding a “Defend Life” sign with the belief that change would happen.

“We are the next generation to abolish abortion — I hope we can do that,” he said.