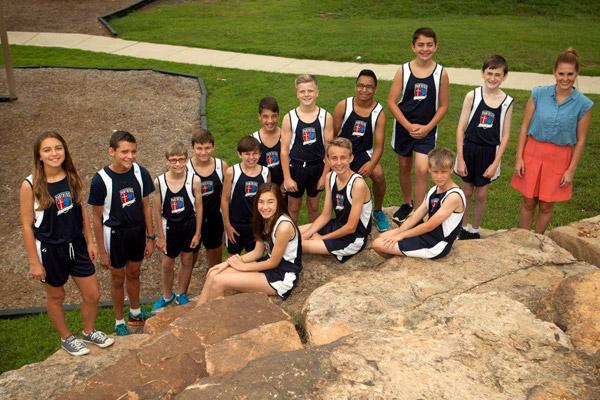 The Panthers of St. Joseph School in Fayetteville pose for a team shot before the first Ozark Activities Conference cross-country championships. The team was coached by Annie Ratliff and Christi Welcher (not pictured). St. Joseph, along with St. Vincent de Paul in Rogers, founded the conference.

The Panthers of St. Joseph School in Fayetteville pose for a team shot before the first Ozark Activities Conference cross-country championships. The team was coached by Annie Ratliff and Christi Welcher (not pictured). St. Joseph, along with St. Vincent de Paul in Rogers, founded the conference.

Quentin Lunsford, athletic director at St. Vincent de Paul School in Rogers, apologized for being a few minutes late to an interview with Arkansas Catholic. St. Joseph School in Fayetteville had whipped a rival the previous night in basketball and Lunsford had taken the time to place a congratulatory call to the Panthers’ athletic director T.J. Barnes.

Lunsford and Barnes are kindred spirits. Barnes, a Kansas-born Catholic, and Lunsford, who grew up Methodist in northwest Arkansas, are young, have been with their schools for a relatively short time and are driven to provide opportunities for their respective schools’ athletes. They are also the impetus behind the Ozark Activities Conference, which debuted this school year.

“(St. Joseph’s) participated in athletics through the local clubs and different organizations, but we found it extremely hard to schedule,” Barnes said. “We’re not big enough to join conferences, and most of the conferences run through the high school level anyway.

“So it came to me; why are we even trying to mess with scheduling around everyone else when there’s a bunch of small schools that have the same exact problem and we could just form our own conference? That’s kind of where the idea sprang from.”

“I wanted to give our kids something to play for, a championship. Let them compete for something.” T.J. Barnes, athletic director at St. Joseph School in Fayetteville

Lunsford said forming the league also provided motivation for his athletes. Until now, the Knights regularly played area public schools with little to show for it.

“We’d play all the Rogers public schools and schools up in Missouri to fill out a 20-game schedule,” he said. “It’s tough playing these big schools and getting beat without having a payoff for it. When we’d play these guys you couldn’t say, ‘Listen, these guys are going to make you better for this purpose.’”

The two athletic directors started making calls to other small schools and received largely positive feedback. In the end they got two takers for the new league, The New School in Fayetteville and NWA Classical Academy in Bentonville.

“We just had a meeting one night at a sports bar with ADs from the other schools and put the whole thing together over a couple pitchers of beer and some wings,” Barnes said with a chuckle. “Kind of a funny story, but that’s really how it came about.”

Additional schools are already vying for inclusion in the league next year and tennis, golf, track and field, music, band and quiz bowl are planned additions in the near future.

Despite having been denied a title thus far, Barnes said the league is already fulfilling a long-held dream at St. Joseph School.

“I’ll tell you one more thing. I wish there was a way to get all of the diocesan schools together ... to be able to compete for a diocese-wide championship. To me, that’s a big thing because in most every other state, they compete through the diocese for championships in athletics.”

As things stand now, Barnes still has a shot to share in some of the first-year honors as St. Joseph’s is on a collision course with St. Vincent de Paul for the league basketball title in a couple of weeks. Whether that happens or not, and regardless who wins, the league is already paying off for the member schools by helping them compete in another sense of the word.

“With all the new private schools that are popping up around here that go through high school, right now there aren’t a ton of them that offer athletics,” he said. “And this is something we can offer to parents. This allows us to compete for students by saying (athletics) is something we offer through eighth grade.

“For some of these kids, it may be the only chance they have to play varsity sports, especially if they go to a bigger high school. This is their chance to know what that’s like.”