Advocate for immigrants shares tales of the border 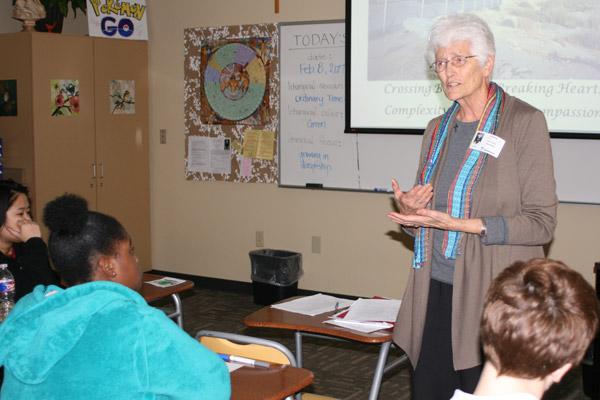 Sister Kathleen Erickson, RSM, spoke with students at Mount St. Mary Academy in Little Rock about her almost 20 years working with immigrants on the United States and Mexico border.

But she was not alone. She carries stories with her like Sandra, a grandmother in Honduras, who is in a county jail in Omaha, Neb.

“I’ve been in jail almost two years. One of my sons in Honduras disappeared over three years ago. We don’t know what happened to him. My nieces are raped and terrorized, and I’m depressed. I will come back if I’m deported because what is life without my children and grandchildren,” Sandra wrote during Advent. Her son, who serves in the U.S. military reserves, and daughter are currently in the U.S. “… I remind myself that I’m still alive and I’d rather be alive in this jail than go back to Honduras and be killed.”

Sister Kathleen spoke with seniors in their theology classes Feb. 8-9 about how she got “out of the bubble” of Middle America, a North Dakota native, and ministered at the border. In El Paso in the early 1990s, Sister Kathleen was tasked with interviewing immigrants applying for asylum.

“When people tell you there are 11 million illegals in this country and make it sound like they’re a bunch of terrible people who have come to do harm to us in some way, we’re talking about ordinary people who may have fled violence, may have just fled severe poverty,” she told the students. “I want you to think about your family and what your dad would do if there was no way he could get enough food for your family. Or what your dad would do if you were threatened and you knew that you were going to be assaulted or killed?”

After the 9/11 terrorist attacks, border security evolved. The understanding of people fleeing for their lives due to persecution in their country for their race, religion, politics or social group to seek asylum was quickly replaced with the mentality that they were a threat. More fencing, lights and cameras were installed, forcing the most determined to flee in more dangerous ways, crossing the Rio Grande River and into the desert where countless are never found.

She has also served as a chaplain at immigration detention centers.

“What do you say to a woman who is sitting in a detention center and cannot stop crying and has lost everything? She’s separated from a baby that she’s breastfeeding, she’s separated from her little kids, she doesn’t know when she’s going to get out of there, what’s going to happen to her, she doesn’t know if she’s going to get deported,” she said, adding she said things like, “You have to take a deep breath … and remember the presence of God within you.”

After her speech, students described how these realizations made them feel.

“It makes me want to help even more because I want to do that with my life, help with foreign affairs and stuff so it makes me like want to get my opinion heard more and make change,” said Grace Anne Hartsfield, 17.

“It makes me angry that this is happening because we’re supposed to welcome immigrants,” she said.

Sister Kathleen encouraged students to pray, be informed and call their elected representatives and the White House.

“All we can do is what we can do to raise awareness,” she told Arkansas Catholic.