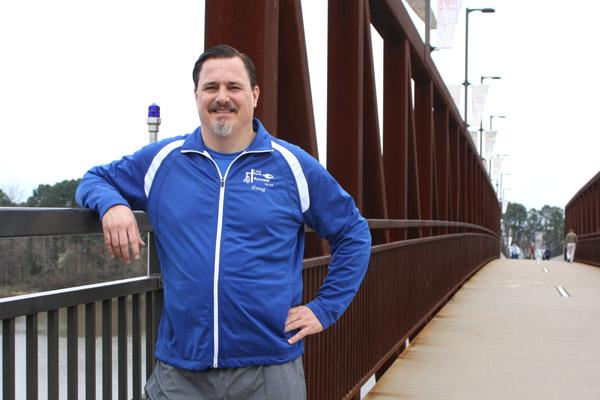 Aprille Hanson
Doug Young, a parishioner at Immaculate Conception Church in North Little Rock, stands on the Little Rock side of the Two Rivers Bridge Feb. 24.

Aprille Hanson
Doug Young, a parishioner at Immaculate Conception Church in North Little Rock, stands on the Little Rock side of the Two Rivers Bridge Feb. 24.

When Doug Young sets out to run a marathon, his goal is more than fitness. It’s a feat of endurance for members of Life Runners, knowing that the finish line will not be crossed until abortion has ended.

“Jesus said in one of his parables, if you did something for the least of my brothers, you’ve done it for me. I think Jesus wants us to help and defend the unborn. I think it really comes down to putting my faith in action,” said Young, 48, a parishioner at Immaculate Conception Church in North Little Rock. “You think about the pro-life movement — you can sign a petition and you can give money, all these different ways  of helping out but I think with Life Runners it’s really an action. You get out there and move, you’re either going to run or walk, and it’s a sacrifice. It’s a time sacrifice, a physical sacrifice and that sacrifice can be a prayer in and of itself.”

Life Runners has more than 5,000 runners and walkers ages 1 to 101 in 50 states and 29 nations, according to liferunners.org. Young, a 23-year U.S. Air Force veteran and currently a contract instructor pilot, met Life Runners founder, Pat Castle, while the two were teaching at an Air Force academy in Colorado. Castle founded Life Runners in 2008 as a way to spread the pro-life message. Young is working to start a chapter in Little Rock, also open to people in central Arkansas.

“It’s just been on my heart to start this,” he said.

“It’s a time sacrifice, a physical sacrifice and that sacrifice can be a prayer in and of itself.” Doug Young

Participants hold steadfast to the Life Runners Creed, which is prayed at each gathering and encourages: prayer to defend the unborn; endurance to keep their eyes fixed on the Lord; awareness so society will learn that human life is a reflection of God; charity to support mothers and fathers in a decision not to abort their child and for those grieving post-abortion; and knowing that they are running to end abortion.

Teams can annually compete in large marathons, like the Chicago Marathon, and other races throughout the year, proudly wearing Life Runners gear, many with the words “Remember the Unborn.”

Young said the Little Rock chapter would meet once a month on the weekend for about an hour, which would include the praying of the creed, about 40 minutes of walking or running and then fellowship. It is free to join, but members are required to buy a Life Runners shirt, which start at $10.89. They will also receive emailed Life Runners updates and Life Runners Devotions to help members grow in their faith, Young said.

“I’ll pray the rosary in my head while I’m running and that’s a great way to do it,” but not required, he said. “Maybe I can be quiet and say, ‘Hey God help me figure this out or speak to me on this topic or anything.’”

Eventually, the chapter would donate to a local pro-life charity.

“We’d have events, maybe go down to the abortion clinic and pray for an hour. Maybe go see a speaker at one of the churches,” Young said. “The vision I have is to have a 5K race the same weekend as the March for Life and Mass for Life and that would raise money for Arkansas Right to Life.”

Members are open to national Life Runners events, like its annual 40-day A-Cross America Relay for Pro-Life starting March 1 and its annual half and full marathon and a 5K, this year in Pensacola, Fla. Nov. 12. There’s even a pilgrimage to Italy dedicated to the organizations’s patron saint, Padre Pio.

The chapter will need at least five members to make it official and a chaplain. Young said there are about four people interested so far. People can sign up at liferunners.org/join-now and select “Arkansas” if listed or “No chapters within reach.” Young will then reach out to members.

“I’m optimistic we can that have a growing, healthy, thriving group that will keep growing and getting bigger and stronger and can be that action arm that will do some real good in the body of Christ,” he said.