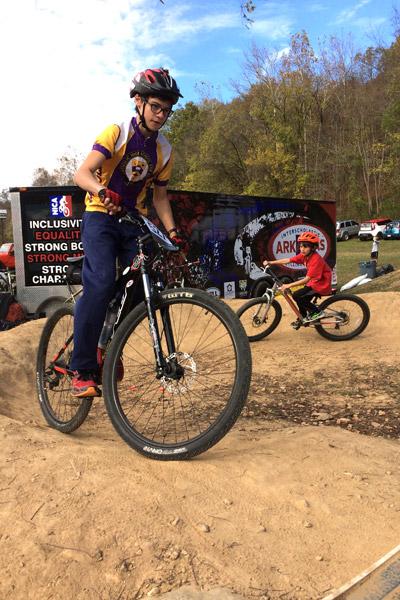 Bob Black-Ocken
Davis Bennett rounds a turn during a race. Bennett, a sophomore from Pine Bluff, was one of the original participants in a new mountain biking club at Catholic High School in Little Rock.

Bob Black-Ocken
Davis Bennett rounds a turn during a race. Bennett, a sophomore from Pine Bluff, was one of the original participants in a new mountain biking club at Catholic High School in Little Rock.

Davis Bennett is a man of few words. Asked what piqued his interest in the Catholic High mountain bike club, the sophomore cuts right to the chase.

“They just mentioned it over the announcements at school,” he said. “I’ve always loved mountain biking, and I was like, ‘Sounds fun, I want to do it.’”

Bennett had ridden recreationally for a long time, but never raced. In fact, he admitted he wasn’t much of a joiner at all throughout his freshman year, saying none of the various activities appealed to him. That all changed when the bike team was announced last fall.

“(Cycling) was a lot harder than I expected,” he said. “I figured out I wasn’t in the best shape, and I needed to do a lot more work to get into better shape. But it was really fun. All the guys out there are really nice, and it’s a great experience. There’s a lot of really great people.”

Bob Black-Ocken, Bennett’s coach, parent of a CHS freshman and a member of Our Lady of the Holy Souls Church in Little Rock, is in many ways his polar opposite. Gregarious and with 25 years of competitive cycling under his belt, Black-Ocken is as dyed-in-the-wool in the sport as Bennett and the handful of Rockets riders that came out for the club’s inaugural season are green.

“The thing that really drew me was focusing on kids that fall in the gaps between team sports,” Black-Ocken said. “More or less, we’re trying to engage them in an activity that’s outdoors, recreational and fun. Arkansas is perfect for this kind of activity.”

The club is a program of the National Interscholastic Cycling Association, an organization that develops groups and provides structure and governance for youth mountain bike events. NICA clubs are forming all over the country, Black-Ocken said, including in northwest Arkansas where Tom Walton of Wal-Mart is a cycling enthusiast and the Walton Family Foundation is a prime benefactor of youth cycling initiatives.

“My interest in being associated with this was, number one, the safety and fun aspect of the program is very important and the whole idea of being inclusive, not exclusive,” Black-Ocken said. “It’s just that open-minded-let’s-go-have-fun-everybody’s-included mentality or vision that really attracted me.”

After attending a NICA coaching clinic, Black-Ocken sold the idea of a club to Catholic High Principal Steve Straessle, along with plans to develop a training run on the school grounds for next season. He said the value of the activity is that it reaches boys who, like Bennett, aren’t typically involved in other school or club sports.

“It’s basically a structured, three-month long clinic, training and racing season. It’s very, very quick,” Black-Ocken said. “Even though it’s in the fall during football, it doesn’t conflict so much because most of the kids that are mountain biking aren’t playing football.”

For a kid like Bennett, the NICA environment is an ideal fit and the benefits go well beyond racing. A native of Pine Bluff where he and his family attend St. Joseph Church, Bennett lives with his grandparents during the week in order to attend Catholic High. Adjusting to a large high school in a new community wasn’t easy, and Bennett shied away from many activities as a result.

But cycling struck a chord with the 16-year-old, so much so he was the only club member to enter actual competition, racing twice.

“I didn’t do too well,” he said. “The first race there was a bike malfunction, and the second I wasn’t ready for such a long race.”

Yet instead of being discouraged, Bennett is enthused about improving for next season. More importantly, the activity has given him the confidence to try new things. He’s already mulling over giving the track team a try, if for no other reason to keep his conditioning up for cycling.

“I learned that I need to be more involved in the outside world and do more stuff with other people,” he said. “It’s fun to hang out with all those nice people and meet new people and talk to them and try new things. Being out there and just doing all those races, win or lose, it was just really, really fun. I’m glad I did it.”