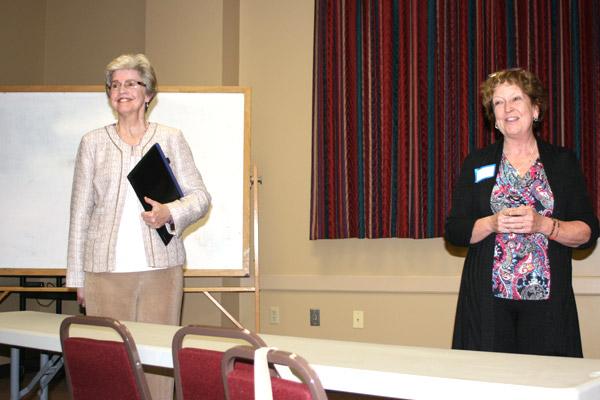 Welcoming the stranger binds most of the world’s major religions and when we close that door, we are closing it to God.

Judge Annabelle Imber Tuck, a retired Arkansas Supreme Court justice, explained this concept and the need for compassion and welcome for refugees and immigrants to a crowd of about 20 at St. John Center in Little Rock March 9.

She was the keynote speaker for the newly formed Pax Christi chapter in Little Rock. Dr. Sherry Simon, a parishioner at Christ the King Church in Little Rock, serves as chapter president along with 10 board members who are all Catholic.

“It was the political climate honestly I became concerned about, even before the election, all the rhetoric going on,” Simon said.

The Catholic peace and social justice chapter, which was active in Little Rock in the 1980s, is part of Pax Christi USA, founded in 1972. According to paxchristi usa.org, the group focuses on the spirituality of nonviolence and peacemaking; disarmament, demilitarization and reconciliation with justice; economic and interracial justice in the U.S.; and human rights and global restoration.

March 9 was the nonprofit’s fourth monthly meeting. It is free to join and members do not have to be Catholic. Simon said the focus will be on prayer, enlightening members on the needs in the community and taking action to help in those areas. The group has also been partnering with the local Arkansas Coalition for Peace and Justice and the Episcopal Peace Fellowship of Arkansas.

Each monthly meeting will ask attendees for donations to a chosen charity.

“There’s a big move toward keeping out people in other countries, that doesn’t feel right to us. There’s just been so much
aggressive rhetoric and we’re concerned with this isolationistic, nationalistic movement in our country,” Simon said.

Tuck, who was only woman ever elected to the Arkansas Supreme Court, served from 1997 until her retirement in 2010. A convert to Judaism, she has been active in the Arkansas Interfaith Alliance and an outspoken opponent of President Donald Trump’s executive order banning refugees and Middle East nationals, both in its first iteration from Jan. 27 that was deemed unconstitutional by the courts and its second revision that was signed March 6. It bars those from Iran, Libya, Somalia, Sudan, Yemen and Syria.

Tuck called the order an “absolute example of fear of others.” Though the order calls for a 90-day “pause” to revamp the screening process for nationals and 120 days for refugees from six Muslim majority countries, it is hardly temporary. The order states that countries, not just the six named, but all that do not provides adequate security information requested by the United States, will then be recommended for exclusion to the United States.

Because there is a federal law that says the country cannot base an entry decision on nationality and it violates due process and equal protection, Tuck said she believes this newest order will also be declared unconstitutional. For refugees, the order also says the U.S. will accept no more than 50,000 a year, which Tuck called “a drop in the bucket of refugees.”

“It’s totally contradictory to ‘give me your tired, your poor, your huddled masses yearning to breathe free, the wretched refuse of your teeming shore. Send these, the homeless, tempest-tossed to me, I lift my lamp beside the golden door,’” Tuck said, quoting the poem incribed on the base of the Statue of Liberty. “This executive order is not that. It is saying you are not welcome. What’s happening is travel is reducing to this country from abroad. In fact millions of dollars, if you want to get into economics, are being lost because of this executive order.”

Tuck also discussed the increased roundups of undocumented immigrants and the fear that many Latinos in the country are experiencing who fled oftentimes dangerous situations in their own country.

“I’m not saying people weren’t being deported before under the prior president but you had to have a criminal conviction,” Tuck said. “Now what they’re doing is they might go to find someone with a criminal conviction but if there’s anybody in that family that’s there that is an undocumented immigrant, they’re getting picked up too … How do you think these families feel that are being torn apart?”

Tuck encouraged Catholics to stay true to their faith teachings. She said it’s important to reach out to Latinos in a person’s parish or other alienated groups to find out how to help and ease fears.

“I want you all to stay with the moral grounding of Catholic doctrine, which is basically humanity realizing that we are all on this planet together,” she said.

Tamara Tahat, who converted to Catholicism before Christmas and now attends Our Lady of the Holy Souls Church in Little Rock, said it was her first time attending a Pax Christi meeting. As someone whose family is half Muslim and half Protestant, Tahat said Tuck’s speech was inspiring.

“She really explained what that order was,” she said. “When she was talking about families being split up, you feel a pain in your heart.”

Pax Christi meets the second Thursday of every month at St. John Center. The board meets at 6 p.m. followed by a talk at 7 p.m. For more information about the Pax Christi in Little Rock e-mail Simon at or visit facebook.com/groups/PaxChristiLittleRock.