Can I?: Answers to common marriage questions 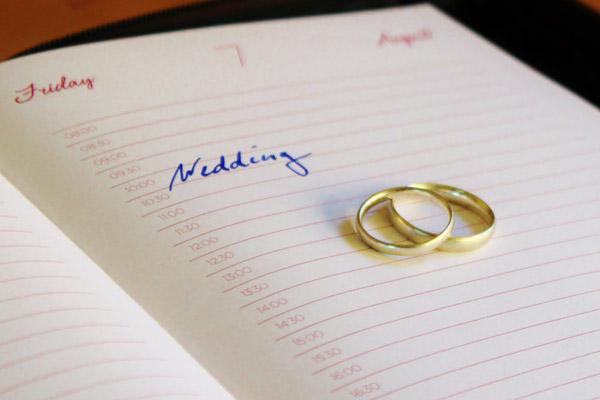 Deacon Matt Glover, chancellor for canonical affairs for the Diocese of Little Rock, answers common questions engaged couples might have about what is expected of them from Church law when it comes to their wedding and marriage.

What are the “right” reasons for being married in the Catholic Church?

“We believe that the Catholic Church contains the fullness of truth, and thus the fullness of every means by which we can get to heaven. And if we believe that, then we also want our marriage to be grounded and based in that fullness of truth, and we want to pass along that same truth to our children,” Glover said. “… Part of that fullness of truth includes that matrimony is a sacrament, and with that sacrament comes real graces from God to help us lead holy and fulfilling marriages in accordance with God’s plan for us. The Church wants all marriages not only to survive, but to thrive — and the only way we can do this is if the couple is completely open and transparent with their priest or deacon preparing them for marriage. There is nothing that the priest or deacon hasn’t already heard before from a couple. So, couples shouldn’t be shy or embarrassed about expressing their doubts, concerns or hesitations about getting married in the Church and all that that entails. It’s only when couples are honest with the priest or deacon that the Church can then help them work through and resolve some of those issues.”

Why do I have to do marriage preparation?

Every sacrament in the Catholic Church requires preparation.

“Marriage is even all the more so because you’re committing the entirety of the rest of your lives here on earth to one another. So it’s not just a sacrament that’s affecting you personally like receiving first reconciliation, or first Communion. It’s a sacrament that’s binding two people together,” Glover said.

Since 2012, a natural family planning course is required for nearly all couples in the Diocese of Little Rock. Why do I have to take a NFP course?

While not every diocese requires it, many do, including the Diocese of Little Rock. A woman’s cycle has fertile and infertile times, which can allow couples to postpone pregnancy naturally by abstaining during fertile times. While Glover, who teaches NFP with his wife, said it’s “more than 99 percent effective” it is still open to life. The Church has always believed artificial contraception is a sin, and sex is reserved only for married couples, as it must be both unitive and procreative.

“In doing marriage prep the Church’s job is to give a couple all the tools that it can give in order to create a happy, healthy and stable marriage that will last forever. We’re not in the business of setting people up for failure in marriage and so we want couples to learn NFP, at least be exposed to it,” Glover said. He acknowledged that while not every couple will follow it, “maybe at some point in the future, they might have that conversion of heart. … We’ve at least planted that seed and gave them the initial tools.”

What if I am divorced, can I get remarried in the Church?

A divorced person cannot be married in the Catholic Church unless their first Catholic marriage has been declared invalid by a diocesan tribunal, following Jesus’ clear teachings in Matthew 19.

“If at least one person is Catholic, and if they were married outside of the Catholic Church without the proper permissions or dispensations, then yes, that marriage is invalid. However, if neither person was Catholic at the time of the wedding, then the marriage is presumed to be valid, even if it did not take place in a Christian church,” Glover said. “If the marriage has been proven to be invalid, then the Church through the tribunal declares that the marriage was never valid to begin with. And so unless there was what we call a declaration of invalidity for that first marriage, then you cannot get remarried in the Church.”

What do I need to do if my fiancé/fiancée is not Christian or not Catholic?

“Any valid marriage between two baptized Christians is a sacrament,” Glover said.

In a mixed/interfaith marriage, do we have to promise to raise our children Catholic? If we say no, are we not allowed to be married in the Church?

Before Vatican II, the non-Catholic fiancé/fiancée was required to sign a form promising that any children from the marriage be raised Catholic. This has changed and is now the requirement of the Catholic to sign the form.

Can I get married if I am living with my fiancé/fiancée before marriage?

“Yes, but any couple who is cohabitating before marriage is presumed to be, even if they are not having sex, they are living a lifestyle that projects to the world as if they are in a married, committed relationship. Just because certain practices have become commonplace in our society doesn’t mean that it aligns with the Church’s teachings and doesn’t mean the Church ought to change its teachings on it,” Glover said. “So yes, they can get married, but those are issues that they need to be totally upfront with whoever is preparing them for marriage. There could be understandable reasons that brought about the couple living together. Financial reasons, maybe they began living together before they had a conversion of heart about the nature of chastity and sex before marriage, but now they’re only six months away from their wedding date and to move out and then move back in financially is an impossibility, or whatever … They really ought to strive to live chastely during that time of marriage preparation even if they hadn’t been up until that time.”

Why can’t I do an outdoor or a destination wedding?

A destination wedding is allowed, but it must be celebrated in a Catholic Church. Glover said the “default presumption” in canon law is that the wedding be performed in the parish of the bride or groom because it’s a communal, church-wide celebration as it’s the “spiritual home” home of the couple. An outdoor wedding is only permitted in “exceptional circumstances” not because a couple has a love of nature. Though the couple may feel close to God in nature, Glover said they’re missing the bigger picture.

“Although nature is beautiful … it’s not the same as a dedicated, consecrated space that’s set apart solely for the worship of God. We believe with a wedding, you’re making a promise and vows not just to each other, but you’re making them in front of God. So the most appropriate place to do that is in God’s house, a sacred space.”

Can I get married at my fiancé/fiancée’s house of worship?

“It’s only for if there’s a special close relationship between the non-Catholic and whatever his or her faith affiliation is. So if you’re marrying a Methodist and they want to get married at Fellowship Bible because they really think it’s neat out there, that wouldn’t be permitted. It’s to recognize a close connection between the non-Catholic party and their whole family,” Glover said.

A priest can be present and say a prayer within the ceremony, but he could not be the officiant if it is in a non-Catholic house of worship.

My friend got married in the Catholic Church at X church and she got to do Y. Why won’t my priest let me do Y?

Depending on the size of a parish and the number of weddings each year, pastors have to draw the line somewhere on what can or cannot be permitted.

“The reality is when a priest is made pastor of a parish he has the full care of souls over that parish and anything that occurs in that parish. Although there are certain liturgical things a priest can do or not do, there are other things a pastor would have discretion on how to do certain things or what to permit or not to permit,” Glover said.

Can I have a Mass if my fiancé/fiancée is not Catholic?

“Yes, you can. That ought to be a real discussion between the couple and the priest. There’s nothing that precludes it. The Church does try to be sensitive, not only to the non-Catholic person who may be going to Mass all the time with their Catholic partner and have no problem with it, but the non-Catholic’s family, it might make them very uncomfortable,” Glover said.

Are there any times in the year I cannot have a wedding?

A common misconception is that couples cannot have a wedding during Lent or Advent. This has changed somewhat. Couples cannot have a wedding Mass on Sundays in Lent, Advent and Easter, as they are “protected liturgical days,” Glover said. They could, however, have the wedding rites within the regular Sunday Mass during those liturgical seasons. Other days that are prohibited include all solemnities, the Octave of Easter, the days of Holy Week, All Souls Day and Ash Wednesday.

“Couples also have to remember that because of the uniquely penitential nature of the seasons of Lent and Advent, they can’t necessarily decorate the church with flowers and other decorations like they might like to do during those seasons,” Glover said.

Why can’t I have secular music or write my own vows?

Because there are different levels of secular music, it would be a “judgment call” between the pastor and couple.

“Maybe it’s not a Catholic artist for Catholic worship, but it has spiritual connotations to it. There’s a spectrum within secularism. I love ‘Star Wars,’ but it’s not appropriate for a wedding,” Glover said. “As Catholics, we don’t denigrate secular music or even Christian music, but that’s not appropriate for Catholic worship. We do believe in something we call sacred music and sacred music is in a category separate and apart from other music, and it’s music that’s intended to be focused on the worship of God and not focused on our feelings or us.”

The vows are set by the Catholic Church and cannot be rewritten because a couple is marrying into “something bigger than yourself.”

“For Catholics getting married, they’re making public vows to get married to one another the way the Church understands marriage and so the Church’s marriage vows are very theologically rich and spiritually rich. A couple could spend all of marriage prep studying the marriage vows and praying and reflecting over what those mean.”

Why should a Catholic be married in the Catholic Church?

If a Catholic gets married outside of the Church, their marriage is invalid and they are prohibited from receiving the sacraments during that time of invalidity.

Your I.D. Episode 5: Marital Intimacy and the Mass

Marriage convalidation: A journey to mercy

Preparation must center on marriage and faith

Checklist for your Catholic wedding