Flying priest ready to share his hobby with parishioners 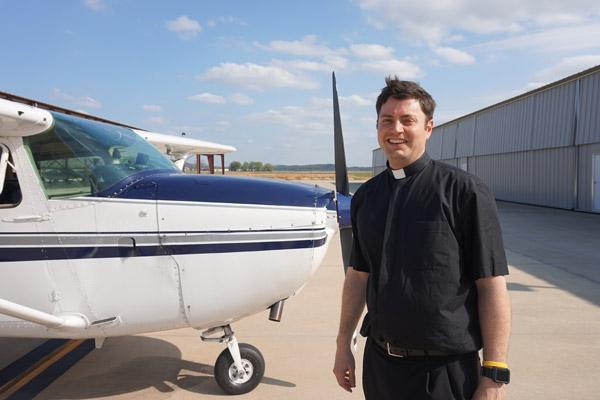 Aprille Hanson
Father Tony Robbins, pastor of St. Joseph Church in Conway, stands March 28 at Conway’s municipal airport with the Cessna 172 he learned to fly in. He earned his pilot’s license March 3.

Aprille Hanson
Father Tony Robbins, pastor of St. Joseph Church in Conway, stands March 28 at Conway’s municipal airport with the Cessna 172 he learned to fly in. He earned his pilot’s license March 3.

CONWAY — Father Tony Robbins has some unique views of St. Joseph Church in Conway — walking in the front door to greet parishioners, consecrating the bread and wine at the altar and looking down on the parish from more than 1,000 feet overhead.

Since getting his private pilot’s license March 3 through Fly Now Aviation with instructor Blake Eremea at the Dennis F. Cantrell Field Conway Municipal Airport, Father Robbins has taken eight people for a ride, including a reporter from Arkansas Catholic March 28.

“We’re going to have fun,” Father Robbins smiled as he guided the four-seat Cessna 172. The next 30 minutes were spent flying over Conway, eager to show St. Joseph Church and the construction work being done for the capital campaign from a whole new perspective.

“I like taking people up and showing them their home,” he said. “It’s really neat. You feel close to God,” in the air.

But like a good pastor, Father Robbins knows the “pre-flight” work with both parishioners and airplanes parallel.

Just like the care he takes with the souls of parishioners as pastor of St. Joseph, his pre-flight checks are done with patience and concern, making sure there’s no water in the engine, that there’s gas in the tank — “One thing you don’t want is your engine stopping unexpectedly” he points out — and checking the propeller, along with other tasks.

It’s fitting that the concept of pastoral care melds with flying — taking flight is spiritual for him, a metaphor for Jesus’ resurrection, he said.

“It feels like grace. God’s grace brings us up to heaven,” Father Robbins, 38, said of ascending in the air, while “landing is like the virtue of humility, coming close to the Earth. Life is full of ups and downs but God is with us through it all.”

The decision to get his pilot’s license was hardly an epiphany. Just like the seeds of faith God planted years before for his priestly ordination in 2010, his desire to fly dates back to the early 2000s.

“Just my interest in flying which I’ve had a long time,” he said, adding he used to fly model airplanes. It wasn’t until his early 20s that he took a ride in a small plane with his uncle, who let him take the wheel for a short time. “When I was up in the plane with him, I felt like I was driving.”

Father Robbins has flown more than 90 hours since June, taking his first solo flight on Sept. 19, the day before his birthday.

“To fly the plane and not kill myself, that will build your confidence,” Father Robbins said of his first trip alone, adding that he tries to fly at least once a week. “I get a day off, that helps. A lot of it is making time for it, an hour here, an hour there.”

Father Robbins bought a four-seat 1967 Mooney M20F on March 4, the day after getting his license, and keeps the plane at the Conway airport.

While he can’t accept payment for flights, he wants to offer plane rides for donations to St. Joseph church and school.

“I’m looking forward to be able to share this experience with anyone who’s interested for making a donation to the parish we can go for an airplane ride,” he said. “… It’s a lot of fun; you get to see your world from a new perspective.”