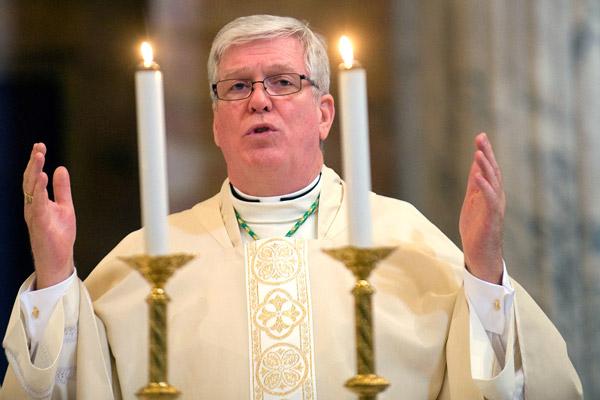 Bishop Frank J. Dewane of the Diocese of Venice, chairman of the U.S. bishops' Committee on Domestic Justice and Human Development, issued this statement April 13 in advance of the seven executions scheduled for April 17-27.

On Good Friday, Christians around the world recall the agony of Our Lord’s Passion, as he became the 'spotless victim' for us, taking upon himself all our sins and bearing their weight on the cross. On Holy Saturday, we remember how Jesus descended into hell to set prisoners free. And, through the liturgy of Easter Sunday, we join the Lord in his triumphant resurrection by which he conquered sin and death for all peoples and for all time.

So often, the images of Christ’s saving action stand in contrast with the activities of the world. Beginning on Easter Monday, the state of Arkansas is prepared to give us a striking and distressing example. Arkansas plans to begin executing prisoners at a pace that would set an infamous record in the United States in modern times: seven men in 11 days. As chairman of the Committee on Domestic Justice and Human Development for the U.S. Conference of Catholic Bishops (USCCB), I write to join my voice with the Catholic community of Arkansas and people of good will across the country and around the world, to plea for Gov. Hutchinson to reconsider this plan. Justice and mercy are better served by commuting their sentences to life imprisonment.

The schedule of executions was not set by the demands of justice, but by the arbitrary politics of punishment. The state’s supply of a sedative is expected to expire at the end of the month, and so, in a dark irony, a safeguard that was intended to protect people is now being used as a reason to hasten their deaths.

In his 2015 address to Congress, Pope Francis called for “the global abolition of the death penalty,” as he explained, “I am convinced that this way is the best, since every life is sacred, every human person is endowed with an inalienable dignity, and society can only benefit from the rehabilitation of those convicted of crimes... [A] just and necessary punishment must never exclude the dimension of hope and the goal of rehabilitation.” The Catholic Bishops of the United States have echoed this call for many years, including in their 2005 statement A Culture of Life and the Penalty of Death.

The leaders of the Catholic Church have called, time and again, for an abolition of the death penalty here in the United States and around the world. The Church stands with victims of atrocious crimes and their families and urges justice. Those who mourn the loss of dear friends and family members experience deep wounds, and the Church stands in solidarity with them in their intense suffering. Indeed, serious criminal activity must be met with appropriate punishment. Yet, as St. John Paul II wrote in his encyclical Evangelium Vitae, “the problem of the death penalty” must be viewed “in the context of a system of penal justice ever more in line with human dignity and thus, in the end, with God’s plan for man and society.” Although “[p]ublic authority must redress the violation of personal and social rights by imposing on the offender an adequate punishment for the crime,” such punishment “ought not go to the extreme of executing the offender except in cases of absolute necessity: in other words, when it would not be possible otherwise to defend society” (no. 56). In developed nations such as the United States, where maximum security prisons can neutralize an incarcerated person’s threat to the general public, such exceptional circumstances do not exist because “[m]odern society in fact has the means of effectively suppressing crime by rendering criminals harmless without definitively denying them the chance to reform” (no. 27).

“It can be very difficult to think of mercy at a time when justice for unthinkable crimes seems to cry out for vengeance. The harm and pain caused by terrible sin is real. But during the Easter Vigil, we will hear from the prophet Isaiah, “Let the scoundrel forsake his way, and the wicked man his thoughts; let him turn to the Lord for mercy; to our God, who is generous in forgiving. For my thoughts are not your thoughts, nor are your ways my ways, says the Lord. As high as the heavens are above the earth, so high are my ways above your ways and my thoughts above your thoughts” (Isaiah 55:7-9).

When Jesus was born into this world, when he united all people in his death and resurrection, He drew us more closely into the ways and the very life of God. As Pope Francis said in his 2016 World Youth Day address, “We must ask the Lord to give us the grace to be merciful to those who do us wrong. Jesus on the cross prayed for those who had crucified him: ‘Father, forgive them, they know not what they do’ (Luke 23:34). Mercy is the only way to overcome evil. Justice is necessary, very much so, but by itself it is not enough. Justice and mercy must go together.” This Easter, let us ask the Lord for the grace to infuse our justice with mercy. May those in Arkansas who hold the lives of these individuals on death row in their hands be moved by God’s love, which is stronger than death, and abandon the current plans for execution.