Priest brings witness of faith to inmates throughout state 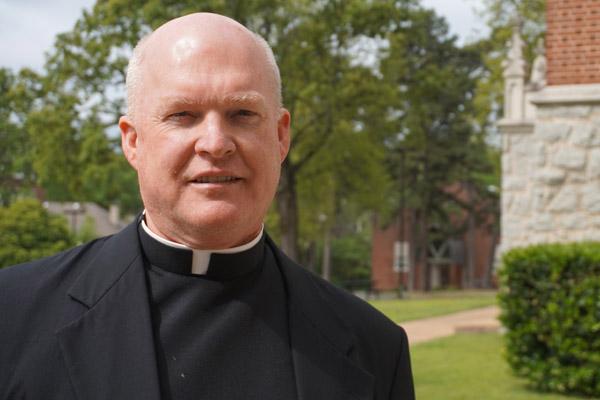 Father Phillip Reaves is pastor at three parishes, but considers his work ministering to inmates at the Ouachita River Unit in Malvern as his “fourth parish.”

In February, Father Reaves was appointed director of prison ministry with Catholic Charities of Arkansas in addition to his responsibilities as pastor of St. Mary Church in Arkadelphia, St. John the Baptist Church in Malvern and Good Shepherd Church in Fordyce.

“My focus at least initially will be with the state prisons, the Arkansas Department of Correction,” he said.

There are 14 prison units throughout Arkansas in the state’s Department of Correction, one federal prison and dozens of county jails.

“Hopefully we have someone going into one of the units, celebrating Mass (so inmates) have the opportunity to attend Mass once a month,” Father Reaves said.

“When I started that, I’d go in on Mondays and would go in the barracks, visit people, do different things the chaplains needed. In the evening here would be Mass,” he said.

His desire to continue prison ministry was solidified when he met a Catholic inmate.

“He looked forward to Monday Mass because I was his only contact with the outside world. He had pretty much burned his bridges before coming to prison with even his family. So that was a big thing for me.”

He has also served the spiritual needs for inmates at the Grimes Unit in Newport and the Tucker Unit in Pine Bluff. Eight years ago, he became a certified religious assistant through the state DOC, which involved shadowing a chaplain or another CRA for 40 hours and two days of additional training in Pine Bluff. This certification, which is also available to laypeople, allows him to walk through the prison without an escort. Father Reaves said most inmates ask for permission to get a phone call out of the chaplain’s office if a relative has died or is extremely ill or just simply to talk or pray together.

“When they’re in prison and have time, that’s the time when they look to see how God might be working in their life or inviting them to accept him into their life,” he said.

One of the reasons he became a priest was to help others experience the love of God and it’s no different whether it happens within the parish or prison walls, Father Reaves said, sharing the story of one inmate at the Grimes Unit.

“His question was, ‘Will God ever forgive me for the things I did because they’re pretty bad?’ He really did not believe that God would,” he said. “The other CRAs talked to him for a little bit. I followed up with him over several weeks or months. He wasn’t Catholic but he got in with one of the other denominations and probably for the first time in his life experienced God in his life so that was a major conversion.”

Gov. Asa Hutchinson has scheduled the executions of eight men on death row April 17-27. The Catholic Church is opposed to the death penalty and has appealed to the governor to commute the sentences to life in prison.

Father Reaves hopes more Catholics will consider becoming CRAs or merely visiting the prisons. He is currently working to coordinate with other ministry groups and Catholics already visiting area prisons.

“A lot of times when people hear me say I’m going over to the prison, their response is you can tell they would be frightened even to be over there. In the movies you see all of these terrible things that are happening,” but that’s not reality, he said, adding any violence that may occur is usually between inmates or an inmate and a guard. “Unfortunately most of the prisons are in areas where we don’t have a lot of Catholic presence.”

For parishioners interested in learning more, email Father Reaves at .